The more research is conducted on the effects of trawling, the harder it is to make a case for why it is allowed—anywhere, ever. It's especially hard to argue for high seas bottom trawling, the kind that dredges up roughly twice the area of the United States every year and, since the United Nations couldn't agree on terms, is currently unregulated. Now, a study published in Proceedings of the National Academy of Sciencesadds to the mounting evidence that our hunger for piscine protein is laying waste to parts of the planet we have never even seen, leading to lasting changes in the sea floor that prevent recovery. 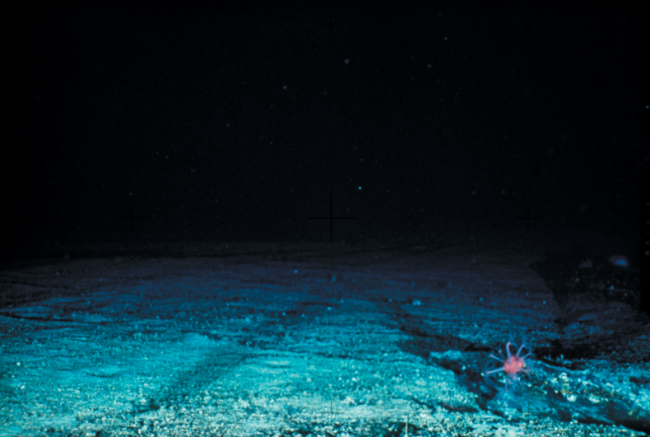 Trawls are bulldozing millions of square miles of the sea floor every year. A new study in PNAS says that if such fishing is sustained, this is all that will be left. Image from Gewin 2004 Trawling isn't a new method of fishing—for about as long as there have been boats and nets, there have been boats that drag nets through the water and along the sea floor, catching whatever animals lie in their path. As early as the 14th century, some began to raise concerns about the sustainability of this high-efficiency fishing method; a petition to King Edward III in 1376 asked for the ban of beam a kind of beam trawl because the trawlers "take so great abundance of small fish aforesaid, that they know not what to do with them, but feed and fatten the pigs with them, to the great damage of the whole commons of the kingdom, and the destruction of the fisheries in like places, for which they pray remedy." But it wasn't until the 19th century that we started to get really, really good at trawling. New kinds of boats were designed that can drag larger and larger nets deeper and deeper into the watery depths of the deep sea. Such engineering prowess was well rewarded—and so we began to empty our oceans, tonnes upon tonnes of fish at a time. From the 1860s to the 1880s, thousands bore witness to the devastation of trawling in the UK, but ultimately, the ruling body decided upon "unrestricted freedom of fishing." On the high seas, which account for 64% of the world's oceans and where no single country oversees fishing activities, unrestricted freedom still holds, since the most recent attempt to get the UN to step in and ban bottom trawling failed in 2006. Modern technology has mastered the art of trawling. Bottom trawlers literally drag nets—up to 200 feet wide and 40 feet high—across the ocean floor, collecting everything from corals to top predators. These nets weigh up to 1,000 pounds and can operate miles below the surface, in habitats few have ever seen. The living sea floor consisting corals, sponges, and other marine life is crushed under the net's massive weight, and everything else dragged to the surface, dying or dead. Deep gouges in the seabed and rubble and are all that is left in the net's wake, and since deep sea organisms are slower growing than shallower ones and take decades to mature, these scars on the sea floor are a lasting reminder of just how much human beings are willing to destroy in the name of greed. 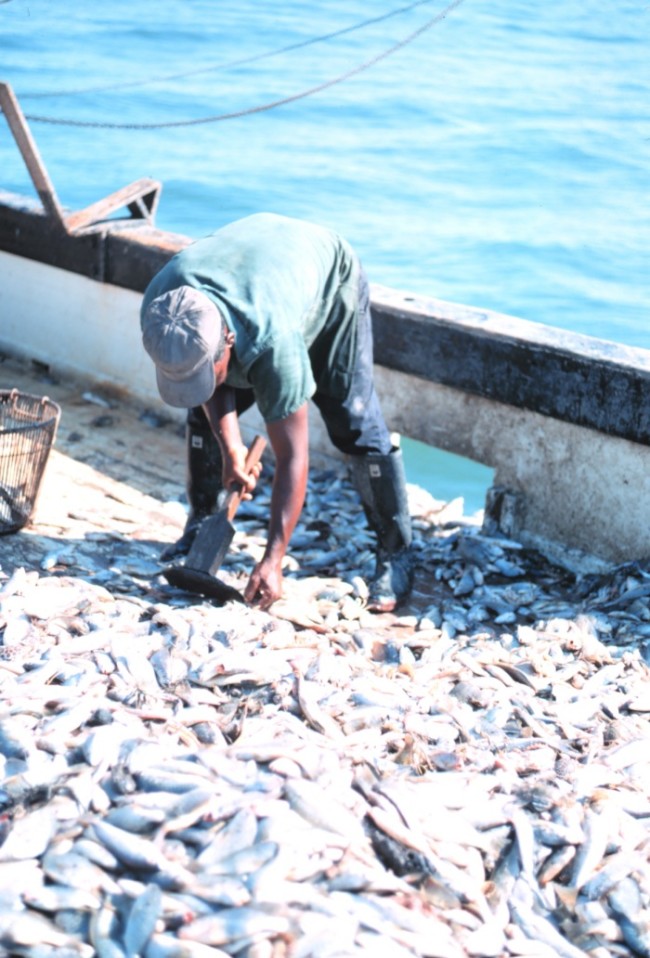 A fisherman separates the shrimp from the bycatch from a bottom trawl. That's right—what you see is what comes up from a trawl for SHRIMP. Image courtesy of NOAA's Fisheries Collection It's no secret that trawling is incredibly destructive. According to the official statement of more than forty international organizations, "both logic and the large, and rapidly growing, number of scientific studies documenting trawling-impacts lead to the unmistakable conclusion that bottom trawling is the world’s most harmful method of fishing." Scientific evidence has been piling up for decades about the serious negative impacts of trawling, from lost habitat and decreased catch to the almost complete annihilation of entire species. Though trawling for species like shrimp accounts for less than a quarter of the world's fish landings, it is responsible for more than half of the global bycatch—more than 3,500,000 tonnes of marine life simply discarded overboard. In some areas, fifteen pounds of bycatch are discarded for every pound of seafood obtained by the trawls. In addition, trawls literally scrape the sea floor bare, dragging or crushing whatever species lie in their path, including fragile and slow-growing sponges and corals. Now, a team of researchers led by Antonio Pusceddu of Italy's Polytechnic University of Marche has shown that trawling doesn't just kill the big stuff—it negatively impacts even the smallest deep sea organisms and throws off the carbon cycling that is vital for the continued survival of benthic communities. Pusceddu and his colleagues compared sediments from heavily trawled areas an untrawled areas of the Mediterranean Sea, examining physical and chemical properties as well as the living organisms present in them. Sediments from high trawl regions had much fewer small organisms, called meiofauna—80% fewer, including only half the diversity of organisms found in untrawled sediments. "Values of meiofaunal abundance in the trawled grounds of La Fonera Canyon are among the lowest observed so far along the continental slope of the Mediterranean Sea," the authors stated. Trawled sediments also had up to 52% lower organic matter content, a measure of fertility and the availability of food for benthic species. The team estimated that the organic carbon removed daily by trawling represents as much as 60–100% of the carbon that is put into the system in the first place. "Deep-sea trawling is currently carried out along large sectors of the oceans, and it appears to have severe consequences on deep-sea sediment dynamics at a global scale," the authors write in their conclusions. "Cumulatively, the impacts of trawling on the sediment structure, the benthic biodiversity, and the most basic of all the nutritional resources in these deep-sea sedimentary ecosystems resemble the catastrophic effects caused by man-accelerated soil erosion on land." Their results show that trawling is a scorched-earth way of fishing that leaves little behind to rebuild. Not only are fish, corals, and invertebrates wiped from an area with each sweep, the very nature of the sea floor is altered by chronic trawling. Since upwards of 98 percent of all marine species live on or immediately above the sea floor, such dramatic changes in sediment biodiversity and chemistry are bound to ripple outward. These data explain why deep sea communities affected by trawling take longer than expected to recover, if they can recover at all. "Intensive and chronic bottom trawling is deemed to transform large portions of the deep continental slope in to faunal deserts and highly degraded seascapes," write the authors. "With deep-sea trawling currently conducted along most continental margins, we conclude that trawling represents a major threat to the deep seafloor ecosystem." Yet despite the overwhelming evidence against trawling, governments remain hesitant to limit or ban the destructive fishing method. While countries like the United States and Indonesia have largely banned trawling within their economic exclusive zones (< 300 miles from shore), global organizations can't seem to agree to work together to protect the high seas. Just last December, the European Parliament rejected an amendment calling for a general phase-out of bottom trawling after two years. "Parliament gave in to industry demands and voted against an immediate ban on bottom trawling and a switch to more selective fishing gear," said rapporteur Kriton Arsenis after the vote. More than 300 scientists and dozens of NGOs and fisheries organizations had signed a petition in support of the ban. The worst part of it all is that deep sea trawling accounts for less than 1% of the world's global catch by volume or value. We're clear-cutting fragile, irreplaceable habitats, overfishing deep fish stocks, and depleting what little reserves our oceans have left for less than one percent. A decade ago, more than 1,000 scientists from 69 countries called for a global stop to bottom trawling. How many more studies need to show that bottom trawling is irreparably impacting marine ecosystems before governments will finally step in?