Elephants' Tail Hairs Tell a Story of Competition on the Savanna 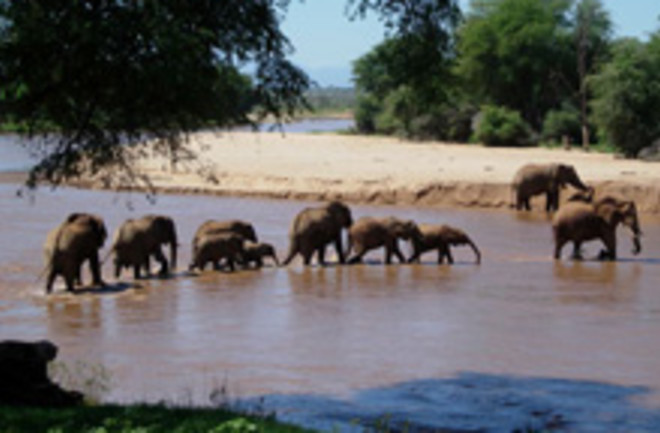 Wildlife researchers have gained an intimate look an elephant family with a clever set of tools: GPS receivers on the animals to track their movements, and chemical analyses of their tail hairs to get detailed histories of their diet. The tail hairs of the family known as "the Royals," led by three sisters called Victoria, Anastasia, and Cleopatra, show that the family roams Kenya's savanna in search of resources, and sometimes gets out-competed. Lead researcher Thure Cerling described the Royals as

"one of the dominant families, like the cheerleaders in high school. They camp out in the best places, where the food and water are best" [Deseret News].

But human settlers with cattle still win out over the Royals.

Your hair is what you eat. As it grows, hair incorporates carbon, hydrogen and other elements from food and water. So a single strand is like a core sample: chop it into short lengths, analyze each, and you have a record of dietary changes over time. That might not be of much use for humans — the technique can’t determine, for instance, if you switched from Cheerios to Froot Loops last month [The New York Times].

For the elephants, however, an analysis can show whether the animals are eating grass or shrubs and trees, and where their water comes from. In the six-year study, which will be published this week in the Proceedings of the National Academy of Sciences, researchers found that the elephants feed mostly on trees and shrubs during the drier season. In the wetter season they switch to lush grasses, but the study found that the elephants don't start munching on grasses until two weeks after the peak in grass growth. Researchers suggest the disparity occurs because the grass has to grow long enough to enable the elephants to grab it with their trunks. But one year, the elephants never made the switch to grass, says Cerling.

"We have this one incident where they apparently missed an entire good season of grass resource; the GPS data shows that they were outside [Samburu National Reserve] in a community area where it appears that they had to compete with cattle. They got out-competed in that situation" [BBC News]

, he says. That blip in the data should serve as a warning, researchers suggest.

The findings provide a hint that as Kenya's population continues to burgeon, and as global warming produces more droughts, increasing competition for grass with domestic cattle might threaten the elephants' ability to bulk up for pregnancy. When the elephants can't eat what they need, the herd could suffer, according to the research [Deseret News].