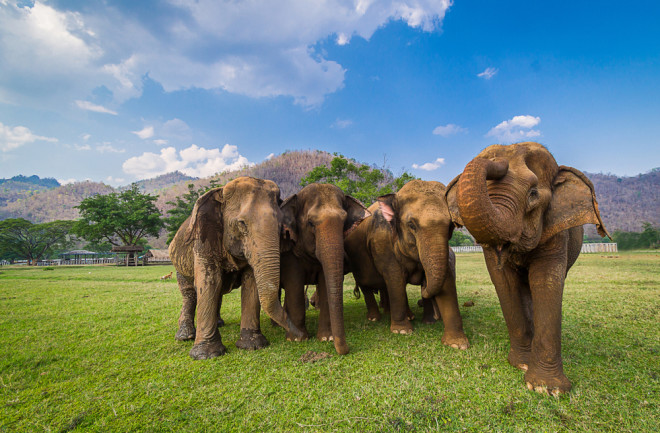 Elephants might be popular in zoos and older kids’ TV shows, but they’re not doing so great in the wild. Asian elephants are classified as endangered, thanks in large part to human activity. But the big beasts are brainy, and they’re trying apparently trying new things in the face of these changing conditions to survive and even thrive.

At least, that’s what a team of Indian researchers describes in a Scientific Reports paper today. They observed groups of adolescent male elephants — which typically live in mixed-sex communities while young, and wander off to lead solitary lives as adults — form and stay in groups to help face the increased risks of modern life. This new behavior was most common in the most dangerous areas, and actually helped the grouped elephants grow into stronger, fitter adults. The authors say it’s just one more way animals are adapting to a changing world – not (solely) with genetics and evolution, but simply by altering their activity.

I mean, it makes sense. While once, adolescent males could just wander off on their own and expect a relatively low-risk environment, nowadays “movement into unknown habitats in search of food, water and other elephants, may become maladaptive,” the authors write. All the more so in human-dominated areas such as farms and cropland.

To investigate reports of unusual all-male groups of elephants, the authors analyzed 1,445 photos of 248 distinct Asian elephants from a 23-month period spanning most of 2016 and 2017. The locations ranged over parts of southern India close to major urban centers, and included said cropland, as well as forested and non-forested areas more isolated from human activity.

They saw that, indeed, groups of males roughly three to six members large were forming and roaming the land together. The most risky environments — non-forested areas and those closer to humans — were most likely to spawn these groups, and saw the biggest ones. Forested spots, which offer more protection for the behemoths, largely saw typical behavior: mixed-sex groups when young, solitary activity when older.

So why go to those riskier spots in the first place? Because croplands have much to offer the determined young elephant, in the form of easy-to-access and nutritional food. By forming these groups, the individuals had significant improvement to overall body condition and less nutritional stress than their solitary cousins in the forests.

It seems to be a decent solution, but these elephants still lead an endangered existence thanks to their proximity to humans. The authors point out that 150 of them die to human-elephant conflict every year in India, and they personally saw 10 succumb within the study. Given this environmental chaos, they write, “associations of male elephants may have emerged as a behavioural necessity for young male elephants in high-risk, high-resource landscapes, especially in recent years.”

And it seems pretty clear that this novel behavior is a result of changing conditions, and not an intrinsic, biological change within the elephants. That’s important, because understanding and predicting these animals’ behavior could help us keep them around. “Although the management and conservation strategies for the increasingly threatened Asian elephant populations need to be explored in the near future,” the authors write, “we have only now begun to understand the more fundamental aspects of this newly emergent social organization in male Asian elephants in human-modified landscapes.”