At first glance, the African elephant doesn't look like it has much in common with us humans. We support around 70-80 kg of weight on two legs, while it carries around four to six tonnes on four. We grasp objects with opposable thumbs, while it uses its trunk. We need axes and chainsaws to knock down a tree, but it can just use its head. Yet among these differences, there is common ground. We're both long-lived animals with rich social lives. And we have very, very large brains (well, mostly). 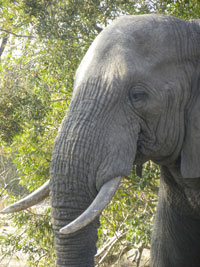 But all that intelligence doesn't come cheaply. Large brains are gas-guzzling organs and they need a lot of energy. Faced with similarly pressing fuel demands, humans and elephants have developed similar adaptations in a set of genes used in our mitochondria - small power plants that supply energy to our cells. The genes in question are "aerobic energy metabolism (AEM)" genes - they govern how the mitochondria metabolise nutrients in food, in the presence of oxygen.

We already knew that the evolution of AEM genes has accelerated greatly since our ancestors split away from those of other monkeys and apes. While other mutations were reshaping our brain and nervous system, these altered AEM genes helped to provide our growing cortex with much-needed energy.

Now, Morris Goodman from Wayne State University has found evidence that the same thing happened in the evolution of modern elephants. It's a good thing too - our brain accounts for a fifth of our total demand for oxygen but the elephant's brain is even more demanding. It's the largest of any land mammal, it's four times the size of our own and it requires four times as much oxygen.

Goodman was only recently furnished with the tools that made his discovery possible - the full genome sequences of a number of oddball mammals, including the lesser hedgehog tenrec (Echinops telfairi). As its name suggests, the tenrec looks like a hedgehog, but it's actually more closely related to elephants. Both species belong to a major group of mammals called the afrotherians, which also include aardvarks and manatees.

Goodman compared the genomes of 15 species including humans, elephants, tenrecs and eight other mammals and looked for genetic signatures of adaptive evolution. The genetic code is such as that a gene can accumulate many changes that don't actually affect the structure of the protein it encodes. These are called "synonymous mutations" and they are effectively silent. Some genetic changes do, however, alter protein structure and these "non-synonymous mutations" are more significant and more dramatic, for even small tweaks to a protein's shape can greatly alter its effectiveness. A high ratio of non-synonymous mutations compared to synonymous ones is a telltale sign that a gene has been the target of natural selection.

And sure enough, elephants have more than twice as many genes with high ratios of non-synonymous mutations to synonymous ones than tenrecs do, particularly among the AEM genes used in the mitochondria. In the same way, humans have more of such genes compared to mice (which are as closely related to us, as tenrecs are to elephants). 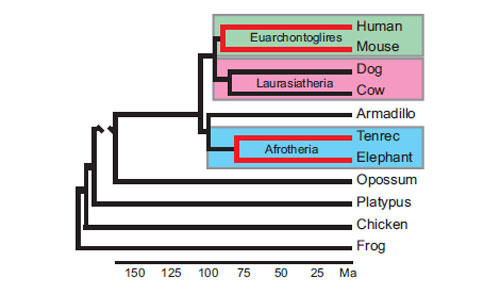 These changes have taken place against a background of less mutation, not more. Our lineage, and that of elephants, has seen slower rates of evolution among protein-coding genes, probably due to the fact that the duration of our lives and generations have increased. Goodman speculates that with lower mutation rates, we'd be less prone to developing costly faults in our DNA every time it was copied anew.

Overall, his conclusion was clear - in the animals with larger brains, a suite of AEM genes had gone through an accelerated burst of evolution compared to our mini-brained cousins. Six of our AEM genes that appear to have been strongly shaped by natural selection even have elephant counterparts that have gone through the same process.

Of course, humans and elephants are much larger than mice and tenrecs. But our genetic legacy isn't just a reflection of our bigger size, for Goodman confirmed that AEM genes hadn't gone through a similar evolutionary spurt in animals like cows and dogs.

Goodman's next challenge is to see what difference the substituted amino acids would have made to us and elephants and whether they make our brains more efficient at producing aerobic energy. He also wants to better understand the specific genes that have been shaped the convergent evolution of human and elephant brains over the course of evolution. That task should certainly become easier as more and more mammal genomes are published.