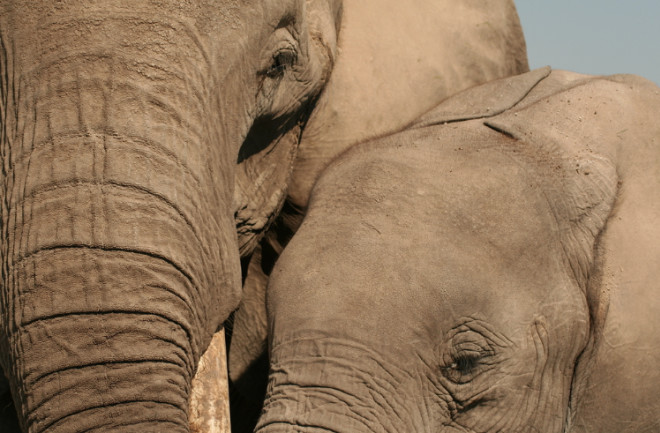 A close-up of an elephant mother and her daughter. (Credit: Graeme Shannon/Shutterstock)

A young female elephant spends almost every minute of every day by her mother’s side. The deep mother-daughter bond is a reflection of the important role older matriarchs serve in elephants’ complex social networks. Elder females are the glue that keeps groups together.

But the passage of time yields longer tusks, which puts matriarchs square in poachers’ crosshairs, and the resurgent ivory trade has claimed the lives of countless elephant family leaders. But in the face of dramatic familial disruption, the daughters who spent their lives in their mother’s shadow step up and fill the void left behind by mom, a new study reveals. For elephants, it appears their social bonds are stronger than the ravages of poaching.

All in the Elephant Family

For nearly two decades, George Wittemyer has followed the same elephant families in northern Kenya’s Samburu and Buffalo Springs national reserves. He’s witnessed pachyderm groups soldier through adversity — from droughts to periods of heavy poaching. And from his extended research, he’s developed a deep appreciation for just how important elephant social networks are to their survival.

“Elephants are highly socially complex, and are probably among the most complex species next to ourselves,” Wittemyer says. “Their social structure is really critical…In some ways, their relationships are stronger than our own.”

Elephant calves will spend almost all their time traveling, eating and resting with their core group. Meet-ups with their bond groups occur less frequently, and clan gatherings occur even less frequently — usually during the wet season when resources are abundant. The matriarchs lead the core groups, and they also decide when and where to interact with bond groups and clan groups. They form the links between disparate elephant groups.

Apart from their networking skills, matriarchs are also repositories of knowledge, which is key to helping their groups solve problems. When Wittemyer started following his elephants, he tracked four families, each led by matriarchs over the age of 40. And age is a good thing: Members of groups led by older females have a better chance of survival.

“Studies have shown that (elephants) perform better when you give them certain tests if they have a matriarch who is very old,” says Shifra Goldenberg, study co-author and Ph.D. candidate at Colorado State University. “Probably the mechanism for that is that they have better memory and more experience.”

Wittemyer and Goldenberg were particularly interested in how elephant social networks responded if a matriarch was killed. What happens when a matriarch’s wisdom and social skills suddenly vanish from a group? To see how elephants responded to dramatic changes, they combed through data collected from roughly 100 elephants during a 16-year period between 1998 and 2014 .

All four matriarchs that Wittemyer started watching nearly two decades ago were killed during that time period. In fact, just 30 percent of the elephants that were alive in 1998 were still alive in 2014, due to the impacts of poaching and a devastating drought. Surprisingly, the elephants’ social structures remained intact, and here’s why: After matriarchs were killed, their daughters stepped up to maintain the extended relationships their mothers had formed with other elephants.

Additionally, the daughters reached out to old acquaintances from their bond and clan groups to renew relationships and reconstruct their core and bond groups. Ultimately, the daughters reconfigured their social networks until they reflected the structure that was in place prior to a matriarch’s death. In other words, younger female elephants kept their mothers’ legacies alive, and, more importantly, prevented social collapse.

“Under certain levels of pressure the population will be resilient and reconfigure itself,” says Wittemyer. “In some ways it’s an optimistic result…the resilience of elephants themselves is a positive note in a pretty bleak picture.”

Still, the reformed groups are led by younger females with less experience, and isn’t clear how that may affect long-term group health. The clan structure has also disappeared among the elephants they’ve studied, and Wittemyer says that clan connections may have diminished because they were a byproduct of ancient matriarchal connections that have since been lost. Wittemyer and Goldenberg published their findings Thursday in the journal Current Biology.

Not Out of the Woods

“We haven’t looked at their fitness or how well their calves survive. While it is a positive story, and certainly optimistic, there’s still a lot we have to do in terms of understanding how poaching is affecting them in the long term,” says Goldenberg.

Goldenberg says we probably won’t know how poaching has truly affected elephants until many years into the future, and Goldenberg says monitoring the animals’ long-term fitness will be their next focus.

Though there’s still much to be learned, elephants’ emergent social complexity serves as a shining example of strength in the face of adversity.