Elephant Seals Take Naps During Slow Dives Through the Sea 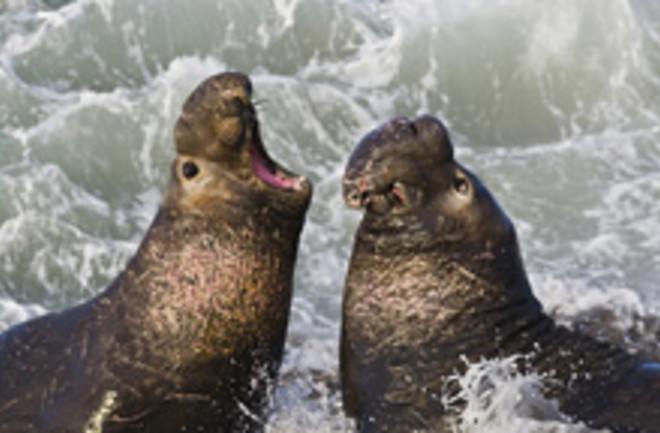 For elephant seals, at least, there is some rest for the weary. These marine mammals undertake epics migrations of thousands of miles, in which they might not return to land for as long at eight months. But elephant seals don't have the same talent as whales and dolphins, which can have one hemisphere of their brains sleep while the other stays awake, so marine biologists weren't sure how the seals managed to doze off while at sea. A new study in Biology Letters, however, suggests the seals might sleep as they drift slowly downward.

Past research had identified certain types of dives that include a period of slow descent that might be a siesta of sorts, for resting or digesting [The New York Times].

So scientists tagged a half-dozen young northern elephant seals off the California coast with instruments that tracked the seals' positions and modeled their dives in three dimensions. The monitors revealed that the seals periodically flip onto their backs and slip into slow, spiraling dives.

The seals wobble as they drift down, and most of the time their bodies follow circular paths toward the bottom of the sea, said study co-author Russel Andrews.... "[They] resemble a leaf that has dropped from a tree branch and is falling toward the ground, fluttering from side to side," he said [National Geographic].

It seems likely, the scientists say, that the seals catch a quick nap during these long drifts; in fact, once in a while they strike bottom without even noticing. Related Content: DISCOVER: 20 Things You Didn't Know About... Sleep DISCOVER: Portrait in Blubber reveals surprising details of the elephant seal's private life DISCOVER: How to Pinpoint a Pinniped describes a tracking technology for seals 80beats: Attempt to Control Invasive Species Backfires Spectacularly on an Antarctic Island 80beats: Otter-like Fossil is a Missing Link in Otter Evolution