By implanting electrodes in jellyfish, researchers can prompt the nerve-less creatures to swim three times faster than normal. 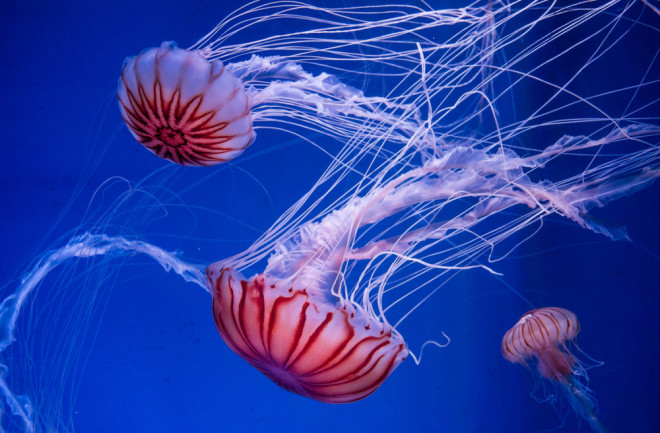 Many robots exploring the ocean's depths come back broken when the cold and pressure prove too much to handle. Certain species of jellyfish, however, thrive in those deep-sea environments. And if researchers tinker with the species’ natural navigation skills, maybe expeditions could rely on these naturally gifted divers instead of on metal contraptions.

That’s a possibility that John Dabiri, a biological engineer at Stanford University, and his graduate student, Nicole Xu, propose in a new Science Advances paper. Electrodes implanted in the jellyfish mimicked the species' own movement system and prompted the tentacled swimmers to travel almost three times faster than normal.

No Pain, All Gain

Designing robots that can handle extreme underwater environments is very difficult. And while researchers attach sensors to whales and other deep divers, data that come from those projects depend on where, exactly, the animal chooses to go. But unlike other ocean residents, jellyfish don't have pain receptors and can't feel the shocks from electrodes. Dabiri thinks researchers could possibly implant electronics in the organisms and control these natural ocean navigators — without worrying about them rusting or breaking apart.

These electrodes could enable researchers to control a jellyfish's movement by making the animal's muscles contract, providing a new approach for exploring the ocean's depths. “From my perspective, it’s possible to do this ethically and practically in a way you can’t with mammals,” Dabiri says. “In terms of efficiency, [jellyfish] have this ability to perform in water that’s really unique. It might be the best of both worlds.”

To prove how this might work, he and Xu tampered with the species’ natural movement system. Jellyfish rely on eight groups of pacemaker cells, which emit rhythmic, electric jolts, spaced out around the edge of their domed body. When any of the clusters activate, they send a ripple of contraction around a muscle ring that tightens and launches the jelly forward.

Dabiri and Xu added two devices, similar to heart pacemakers, to the system. The electrodes initiate the same kind of contraction when they go off, just like a pacemaker prompts the heart to pump. When the implants fired at a higher rate than the jelly’s natural contractions, the duo could make the jellyfish swim faster.

Dabiri and Xu found they could make the jellyfish contract about three times faster than normal. Typically, moving three times faster would consume nine times as much energy, Dabiri says. But when they measured how much oxygen the jellyfish were using while swimming faster, the team saw that the jellies were only using twice as much energy as normal.

If moving this fast is so efficient, “it begs the question, ‘Why not do this all the time?’” Dabiri says. Maybe there wasn’t enough evolutionary pressure for jellies to hustle, as they have few predators. The jellyfish also didn’t appear to be bothered by having electrodes inserted into their tissue. They can’t feel pain, Dabiri says, and none of the jellies secreted any fluids, a classic stress signal for the species.

More research will tell if jellyfish can handle forced movement for longer than a few hours in the lab. Jellies might move slowly because the pace helps them catch food, and researchers would have to make sure diving jellyfish eat enough on expeditions. It's these reserves of energy that enable the boneless critters to contract their muscles in the first place.

Dabiri also hopes other labs start experimenting with the concept, too. All the gear cost about $20 per jellyfish, and Dabiri thinks the system could be customized to help change what direction they swim in or even what kind of data — like salt levels or temperature — the sensors collect. “Telling it to dive to a depth, take measurements and come back is in the realm of possibility,” Dabiri says.