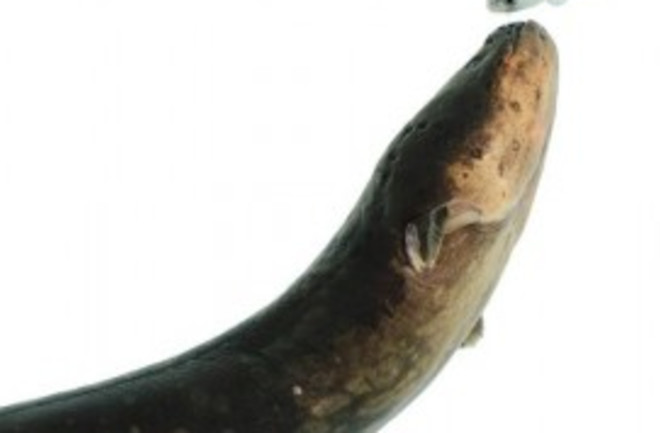 An electric eel reaches for its prey. Photo by Ken Catania, Vanderbilt University Lurking in the muddy waters of the Amazon is a fish that has fascinated some of the greatest scientists in history, including Darwin and Faraday. The electric eel (Electrophorus electrics) is one of the most notorious species on the planet, and yet, there is still much to be learned about these elusive fish. Despite the name, electric eels aren't actually eels at all — they're the only species in the genus Electrophorus, a member of the knifefishes (order Gymnotiformes). These slender shockers can grow to lengths in excess of 7 feet and weigh almost 50 pounds, and are one of the top predators in the muddy South American waters they call home. Their name comes from the current-producing cells that coat roughly two-thirds of their body, called electrocytes, which can collectively discharge more than five times the voltage of a US power socket. In humans, the shock produced by electric eels feels much like that of a stun gun, causing brief, painful paralysis by overactivation of muscles. And since the discovery that these slippery fishes can cause such a strong electrical pulse, it has generally been assumed that they use their weaponized electricity to stun prey, using their electric organs to produce taser-like shocks. But neurobiologist Kenneth Catania wasn't sure that was the whole story. While the eels' shock is enough to take out the small goldfish fed to them in captivity, Catania wasn't sure that it would work on the diversity of invertebrates and fishes that could comprise the eels' natural diet. He was curious what would happen if the eel were presented with larger, less easily subdued meal choices. Catania's first shock while studying these formidable predators was that scientists' assumptions about how the eels hunt were largely wrong. Previously, it had been believed that the eels have two electric modes — low voltage, to hunt for prey, and high voltage, to shock what they find. But Catania found that the fish use high-voltage simultaneously as a weapon and as a sort of echolocation, to precisely locate fast-moving food. And while he was studying their voltage modes, he noticed that sometimes, feeding eels did something weird: they curled into a circle. https://www.youtube.com/watch?v=as229H16IF4 Perplexed by the behavior, Catania built what he describes as an "eel chew toy" — a dead fish or crayfish tail studded with a pair of electrodes — to measure the eel's voltage while feeding ("If you've got a dog and play with it, they get really excited. It wasn't exactly the same, but it reminds me of that."). He discovered that the curling action led to a significant power boost. "The head and tail of the eel are essentially the negative and positive sides of a battery," Catania said. By coiling, the animal is able to double the voltage experienced by the unfortunate prey item in the middle.

By wrapping around their prey, electric eels can deliver twice the voltage. Image by Ken Catania, Vanderbilt University The curling was necessary because, contrary to what was previously believed, the eels don't always stun with a single jolt. "Striking eels emit electricity in volleys of 1 ms, high-voltage pulses," explained Catania. "In a typical attack, eel discharges cause brief, immobilizing tetanus, allowing eels to swallow small prey almost immediately." But when the eel's efforts don't go as planned, the animal turns to plan B: electrical exhaustion. "Each of these pulses the eel gives off is activating the nervous system of the prey," Catania said. "The eel essentially has remote control over the prey's muscles and runs them to exhaustion, leaving the prey temporarily helpless." The eel then maneuvers its meal to a favorable swallowing position and finishes the job. https://www.youtube.com/watch?v=HfAgIm3cuGk How do the eels emit these currents while curled up without shocking themselves? So far, Catania can't say, but he's itching to find out. He'd also like to determine what the eels actually eat in the wild — something that no one knows. "Even after an animal has been studied for 200 years, there are still incredible things to learn," Catania said. Citation: Catania, K. C. (2015). Electric Eels Concentrate Their Electric Field to Induce Involuntary Fatigue in Struggling Prey. Current Biology, 25, 1-10. DOI: 10.1016/j.cub.2015.09.036