Eland antelopes click their knees to prove their dominance

You are the alpha male, the top dog, the grand kahuna. A young upstart is trying to muscle his way onto your turf and compete for your women. Your solution - click your knees loudly at him. It seems like a strange strategy. For humans, a clicking knee would hardly be a sign of strength but it's all part of the bizarre communications of the world's largest antelope - the eland. 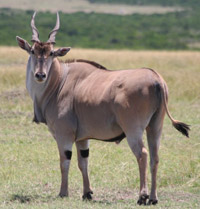 Elands bulls have a strict pecking order that determines their access to females in the herd. On the few occasions when they fight, they hardly ever use their dangerous horns and hooves, preferring instead to prove their strength through neck-wrestling. Even these grapples are a rarity; most eland conflicts are settled without violence through a series of ritual signals.

These signals include the bizarre knee-clicks which the bulls make with their front legs while walking. They sound like castanets and can be heard hundreds of metres away (listen to a WAV file). Predators could obviously use these distinctive noises to home in on eland males, so what purpose could they serve that compensates for this risk?

Bro-Jorgenson and Dabelsteen spent several months in Kenya studying the signals used by elands. Armed with little more than a microphone and a camera, they meticulously recorded information on 48 males and followed up on 14 of these a year later to see if they had changed at all. They found that the frequency of an eland's knee-clicks reflects its size. The bigger the animal, the lower the frequency of its clicks and the deeper the resulting sound.

The clicks are made by the eland's tendon. As it slips over a bone in the knee, it vibrates like a string, and like any string, the frequency of the sound wave it produces falls as its diameter and length increase. So as an eland grows and its tendon gets longer and wider, its knee-clicks deepen. Indeed, only one out of fourteen bulls produced higher clicks after the year-long gap, and it was clearly wasting away from poor health.

Settling conflicts through signals is commonplace in the animal kingdom. Combatants may be armed (often literally to the teeth) with lethal weapons but it behoves both to settle disputes without risking spilt blood or wasting valuable energy. The eland's knee-clicks are just one example, albeit a frankly bizarre one, of such ritual signals.

They are also honest messages - it's physically impossible for a small or weak male with wimpy tendons to produce the resonant clicks of prime specimens. And since eland bouts rely on strength, and larger animals have an advantage over smaller ones, knee-clicks allow elands to accurately assess each other's fighting prowess.

Other visual signals help. Along with the clicks, Bro-Jorgensen and Dabelsteen studied several potential visual traits that could also serve as indicators of strength. These included the greyness of the elands' bodies, the darkness of the mask-like fur across their faces, the size of the brush-like knob of hair on their heads and the size of their dewlap - a flap of skin beneath their throats that can greatly increase the size of their silhouettes.

They ran these measurements through a mathematical technique called 'principal component analysis', designed to look for patterns in complex data. The analysis showed that the size of the dewlap increased with age (as estimated from the length of each animal's horns), another quality that can separate winners from losers.

Meanwhile, the darkness of the face mask, the size of the frontal brush and the greyness of the body all varied in the same way from male to male. Those with extreme versions of one trait had extreme versions of all three. The duo think that these traits reflect the levels of testosterone and other male hormones circulating in their bodies, which could in turn convey their aggressiveness and temperament. So with a combination of colour, shape and sound, elands can tell one another about how strong, how experienced and how aggressive they are.

Among other hoofed animals, only reindeer produce similar clicks and their purpose is still unknown. Perhaps, they are a signal, perhaps reindeer use the clicks to echolocate in order to pull sleighs accurately through misty weather...

[Quick note - check out the image below showing an eland and the various physical features that were measured. I absolutely love the little musical note next to its knee.] 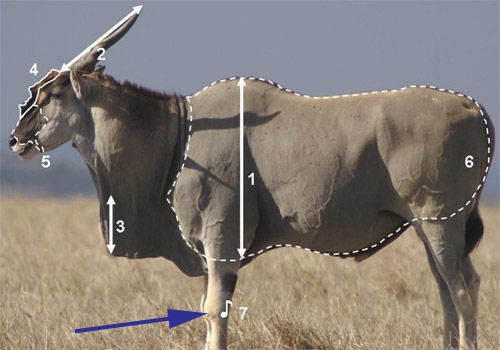