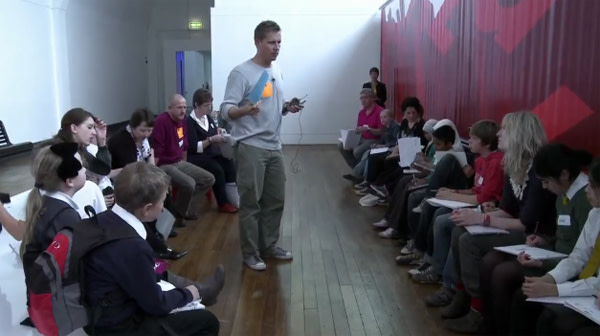 “We also discovered that science is cool and fun because you get to do stuff that no one has ever done before.”

This is the conclusion of a new paper published in Biology Letters, a high-powered journal from the UK’s prestigious Royal Society. If its tone seems unusual, that’s because its authors are children from Blackawton Primary School in Devon, England. Aged between 8 and 10, the 25 children have just become the youngest scientists to ever be published in a Royal Society journal. Their paper, based on fieldwork carried out in a local churchyard, describes how bumblebees can learn which flowers to forage from with more flexibility than anyone had thought. It’s the culmination of a project called ‘i, scientist’, designed to get students to actually carry out scientific researchthemselves. The kids received some support from Beau Lotto, a neuroscientist at UCL, and David Strudwick, Blackawton’s head teacher. But the work is all their own. The class (including Lotto’s son, Misha) came up with their own questions, devised hypotheses, designed experiments, and analysed data. They wrote the paper themselves (except for the abstract), and they drew all the figures with colouring pencils. It’s a refreshing approach to science education, in that it actually involves doing science. The practical sessions in modern classrooms are a poor substitute; they might allow students to get their hands dirty, but they are a long way from true experiments. Their answers are already known and they do nothing to simulate the process of curiosity and discovery that lie at the heart of science. That’s not the case here. As the children write, “This experiment is important, because no one in history (including adults) has done this experiment before.”

The experiment The trick was to get the children to see the scientific process as a game – we play by a set of rules to discover hidden patterns and relationships in the world around us. It’s a viewpoint that Lotto firmly believes in and one that turns science education into “a more enlightened and intuitive process of asking questions and devising games to address those questions.” With games on their minds, the children started talking about how animals see the world, using everything from bug-eye lenses to videos of silly dog tricks. The conversation moved onto bees and how they forage for nectar, and the questions came thick and fast. In the childrens’ own words: “We came up with lots of questions, but the one we decided to look at was whether bees could learn to use the spatial relationships between colours to figure out which flowers [to visit]. It is interesting to ask this question, because in their habitat there may be flowers that are bad for them, or flowers from which they might already have collected nectar. This would mean that it is important for bees to learn which flower to go to or to avoid, which would need them to remember the flowers that were around it, which is like a puzzle.” The children designed a Plexiglas cube with two entrances and a four-panelled light box in the middle. Each panel had 16 coloured lights, illuminated in clear patterns of blue and yellow. Each light had a feeder that dispensed either delicious sugar water or repulsive salty water. Once the bees had learned to drink from the feeders, the kids turned the lights on. At first, the outer lights on each panel were set to blue and held salty water, while the yellow inner lights contained sugary water, rather like a simple flower (image below, left). Every 10-40 minutes, the colours were swapped so that the inner blue lights were sugary and the outer yellow ones were salty. To ensure a sweet mouthful, the bees had to visit the central lights rather than relying on a single colour. And they did. Without any actual water to guide their choices, they landed on the central lights over 90% of the time. But individual bees (marked with coloured paint) had learned to do this through different rules. Some flew to the central lights on each panel, regardless of colour. They still flew to the right lights even when the kids switched them to green (image below, middle). Other bees were more strongly influenced by colour; when faced with the green-centred panels, they visited the more familiar yellow or blue lights. As a final test, the kids switched all the lights on each panel to the same colour, except for the four corner ones (image below, right). This time, the bees didn’t show any clear preference for the corner or middle lights. They weren’t just using a “visit central lights” rule, or a “visit least common colour” rule. Their selections were almost random, although some of them clearly still had a “favourite colour”. In a commentary that puts the study in perspective,

say that the bees can clearly “extract and flexibly recall different cues from complex scenes”. They use a combination of colour, location and pattern in a way that varies between individuals, and that rivals some back-boned animals. 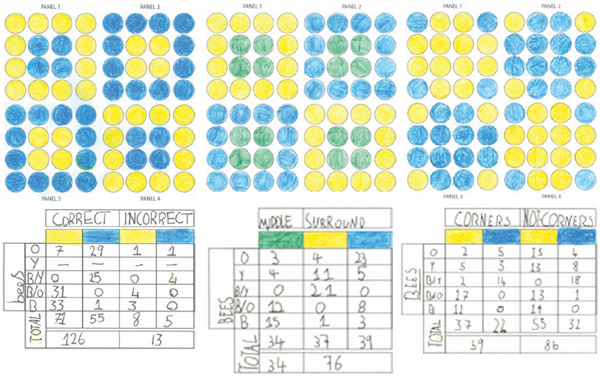 The road to publication While the experiments are “modest in scope”, Maloney and Hempel think that they’re “cleverly and correctly designed and carried out with proper controls.” They write, “The experimenters have asked a scientific question and answered it well.” Their work is certainly unorthodox. There aren’t any statistical analyses and there are no references to past literature. Lotto doesn’t see that as a problem. He writes, “The true motivation for any scientific study (at least one of integrity) is one’s own curiousity, which for the children was not inspired by the scientific literature, but their own observations of the world.” The lack of context doesn’t weaken the study. “On the contrary, it reveals science in its truest (most naive) form.” Not everyone agreed. The editors of several top journals, including Nature, Science, Current Biology and PLoS ONE loved the idea but passed on publishing the paper because it lacked references and was written in kid-speak. But Lotto was determined. “The aim was to not get it published simply as a kid's project, but for its scientific contribution,” he says. To that end, he asked four independent experts in vision to review the paper, and only one questioned its scientific merit. That helped to convince Chris Frith

, an editor for Biology Letters. Frith agreed to publish the work after soliciting four more reviews (all positive) and the commentary from Maloney and Hempel. Real science While Biology Letters typically requires a subscription, the Blackawton bees paper will be free until the New Year

. I’d strongly encourage everyone to read it for themselves. It’s full of warmth and humour. The methods includes, “We then put the tube with the bees in it into the school’s fridge (and made bee pie)”. One of the headings reads, “Training phase 2 (‘the puzzle’ . . .duh duh duuuuhhh)”. Science teacher Alom Shaha

loved the cheeky tone. He says, “What an inspiring bit of work. I feel strongly that there isn't enough "real" science in schools... I suspect the students who participated in this will have a more positive attitude towards science than before the project.” However, he adds, “How long will that last for if they are not exposed to the same level of interesting science teaching in the future? How do we get more schools doing stuff like this?” It’s a question for headmasters to consider. For now, Lotto is far from done. He has recently moved his lab to the Science Museum in London

, transforming it into a public space “where children (and adults) from the around the UK come together to design experiments.” He says, “If we receive our long-term funding from the Wellcome Trust and others, then the space will become a permanent location for anyone (public, organisations, etc) to do real science.” Next year, he plans to apply for a similar project called “i,am...”, which will turn young, vulnerable people into real researchers. To Lotto, this is about far more than just making young scientists – it’s about harnessing the values of science to improve people’s lives. He says, “The best science celebrates uncertainty, to be willing to make mistakes and learn from them, to take risks, to see situations - any situation (not just scientific) - from more than one perspective, to collaborate, to observe and play. In other words science is a way of being that, at its best, is natural, creative, adaptive and compassionate. It's these latter qualities that the programme is attempting to foster.” Reference: Biology Letters http://dx.doi.org/10.1098/rsbl.2010.1056

More on science outreach and education: