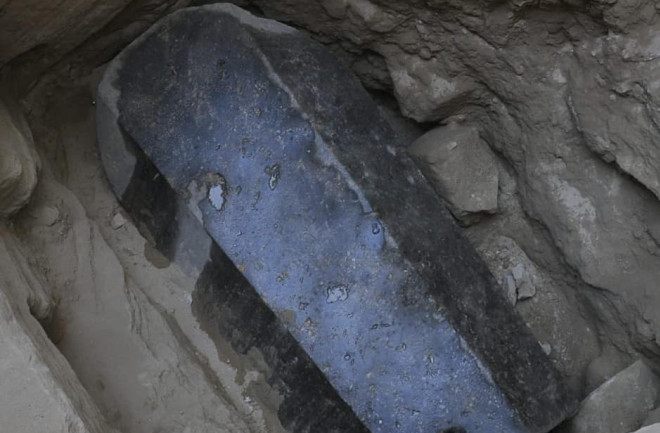 A 2,000-year-old sealed black coffin was unearthed in Alexandria this month. Plans to exhume and open it has caused chatter online. (Courtesy of the Ministry of Antiquities) Alexandria, known for its ancient library and a lighthouse counted among the Seven Wonders of the Ancient World, just keeps on giving. The reaction to its latest gift has been bad mummy jokes online. During a construction survey, a sealed sarcophagus was found in the Egyptian city 16 feet beneath the Sidi Gaber district, according to a news release this month. The tomb is made of black granite, 9 feet long and 5 feet wide, the largest ever discovered in the city. Mortar seals the coffin, indicating it’s never been opened, says Mosatafa Waziri, general secretary of the Supreme Council of Antiquities. Also discovered is a head sculpture, believed to represent the coffin’s inhabitant. The tomb, which weighs 30 tons, is likely from the Ptolemaic dynasty (305 to 30 BC). While there’s speculation about who might be inside (a nobleman of Alexander the Great is a leading pick), the internet has mostly latched on to Egyptian tomb curses —you know, the stuff in mummy movies. On the Ministry of Antiquities Facebook site, where the find was initially announced, posters have been weighing in. A sampling:

“For some reason, this find imbues me with unease, and I’ve only seen a couple of mummy movies lol….BTW, humanity’s curiosity has been its downfall on more than one occasion, I’m sure. This find is just too intriguing NOT to open, you know what I’m saying?” “So what is the grave robbing curse cutoff? One thousand, ten thousand years, 2 months three business days?” “Be very careful stranger things have happened, this person or person maybe put there to remain undisturbed.”

It might take weeks or months, but make no mistake — the coffin will be opened and its contents disturbed, which will certainly set off another round of curse chatter.