Egypt Finds Tombs of Pyramid Builders, And More Evidence They Were Free Men 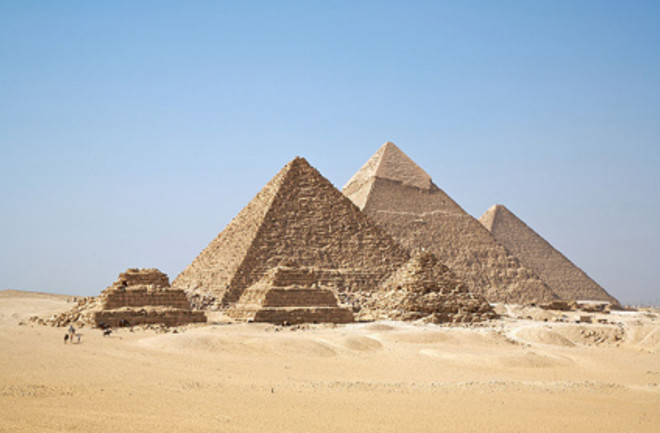 Forget the myths about massive numbers of slaves or Jews building the great pyramids, Egypt's chief archaeologist argues this week. He says Egyptian researchers have found the tombs of more pyramid builders, and in those tombs more evidence that free men erected these monumental tributes to the ancient pharaohs. Zahi Hawass this week unveiled new research on 4,000-year-old tombs found near the pyramids—tombs he says belonged to pyramid builders.

"These tombs were built beside the king's pyramid, which indicates that these people were not by any means slaves," said Mr Hawass. "If they were slaves, they would not have been able to build their tombs beside their king's" [The Times]

. In addition, Hawass says that the walls of the tombs (which the builders probably built for themselves) bear graffiti like "friends of Khufu (a pharaoh)." For Egyptologists like Dieter Wildung, a former director of Berlin's Egyptian Museum, this is more confirmation than surprise.

"The myth of the slaves building pyramids is only the stuff of tabloids and Hollywood.... The world simply could not believe the pyramids were build without oppression and forced labour, but out of loyalty to the pharaohs" [Canadian Press]

, says Wildung. In particular, Egyptian officials like Hawass, who have national pride at stake, have long pushed against the idea slave-built pyramids,

saying it undermines the skill involved in their construction, and the sophistication of ancient Egypt's civilisation [BBC News]

. Actually, the slave myth dates back much further than "tabloids and Hollywood," to ancient texts.

The Greek historian, Herodotus, visited Egypt several thousand years after Khufu’s pyramid was built, he wrote that Khufu forced his people to “labour as slaves for his own advantage” thus prompting the first accounts that the pyramids were built by slaves [The Times]