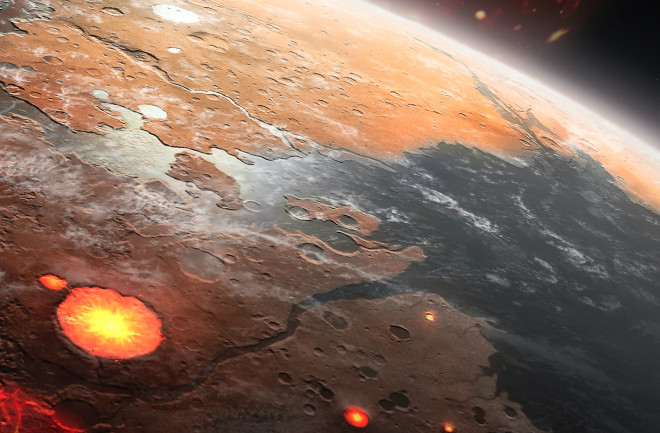 Geologists have long debated when continents first formed. A new model suggests they took shape half a billion years earlier than thought, during our planet’s turbulent childhood — which could mean life started earlier, too. (Credit: Science Photo Library)

We’re all here thanks to continents.

Among rocky planets in the solar system, only ours has masses of less-dense rock that rise above surrounding crust. Yet our planet wasn’t born with them.

We know that these land masses are a direct consequence of plate tectonics, when slabs of crust, continental and oceanic, interact as they move across the planet’s melted mantle. But we don’t know when or how quickly the continents formed — it’s one of the most challenging questions about Earth’s early history. Some geologists believe most of the continents popped up in the last billion years. Others think they have been forming slowly and steadily since the planet took shape some 4.6 billion years ago. Still other schools of thought suggest the land masses formed in fits and starts as pieces of them collided and then broke apart.

The evidence needed to solve this mystery is hard to find. Geologists typically analyze samples of Earth’s oldest-known crust — dating to the Archean Eon, from 4 billion to 2.5 billion years ago — to try to determine when the first continents formed. But little of that material has survived.

Some researchers consider 4.4-billion-year-old Australian zircon crystals — the oldest preserved building blocks of rocks — as evidence of very early continental crust, but theirs is a controversial conclusion.

Derrick Hasterok of the University of Adelaide and his colleagues took a new approach to solving this mystery. They collected a huge amount of geochemical data from almost 25,000 samples to map out how much heat has been produced by rocks in Earth’s crust in the last 4 billion years. The continents are made of granite, which is enriched with radioactive elements like potassium, uranium and thorium. As these elements decay, they produce heat at known rates.

In July, the team reported in the journal Precambrian Research that they’d identified a “heat deficit” in the models of our planet’s early history that could only be solved by more granite existing in the past than previously thought.

The team’s results suggest that continental crust might have formed half a billion years earlier than most current models suggest. These early continents would have been unstable, due to more abundant radioactive elements present at the time. The elements could have produced four times the heat than levels seen later in the geological record, making the first continents prone to melting and reworking — and thus less likely to be preserved.

Much more than the ages of rocks is at stake. If the new model is correct, and the first continents emerged earlier than thought, it means plate tectonics was already in motion at the time. The tectonic engine has been a driving force on the planet, creating carbon dioxide-belching volcanoes and influencing ocean and wind currents, for example. Without that influence on climate, Earth may have remained a lifeless planet. And, if the dynamic process began much earlier than we thought, it’s possible that so did the story of life.