Earthquakes, Tsunamis and Eruptions in Indonesia 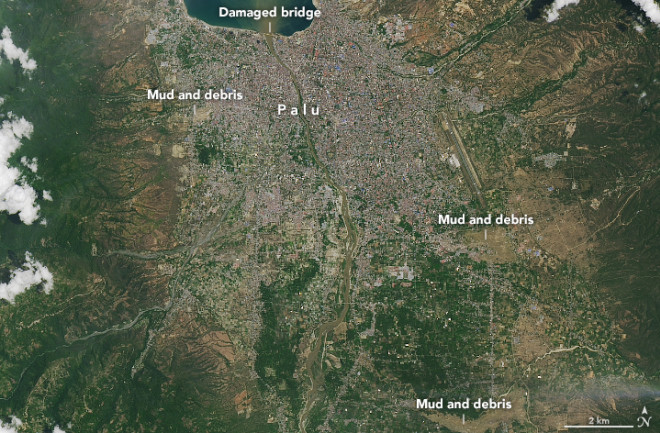 'Landsat 8 image showing the damage to Palu from the M7.5 earthquake and tsunami. <a href='https:

The earthquake and tsunami that happened last week on Sulawesi in Indonesia has been more devastating than anyone expected. The number of deaths in and around Palu has topped 1,400 and aid has been slow to reach the survivors due to the damage to infrastructure in the area. It is still unclear exactly what triggered the tsunami that followed the M7.5 earthquake — there is speculation it was an undersea landslide that followed the temblor. What is known is that this earthquake ruptured a long stretch of the island with displacement of over 5 meters along the strike-slip (side by side) fault (see below). We also know that Indonesia’s early warning system for tsunamis, built mainly after the 2004 Boxing Day tsunami, did not appear to operate as planned.

USGS Shape Map for the Palu earthquake. Soputan is located on the far eastern portion of Sulawesi near Manado. USGS.

USGS Shape Map for the Palu earthquake. Soputan is located on the far eastern portion of Sulawesi near Manado. USGS.

Now, with any big natural disaster, there is the tendency for people (and the media) to start jumping to conclusions about connections and correlations. Case in point: the eruption of Soputan (see below), also on Sulawesi, that happened yesterday. This Indonesian volcano is one of the more active volcanoes in a country that is filled with them. Sulawesi itself has at least 10 potentially active volcanoes. However, although the earthquake and eruption happened on the same island, they are almost 1000 kilometers apart. If you need a comparison, that is almost the distance between Seattle and San Francisco! If you check out the shake map related to the Palu earthquake, very little shaking was felt that far east near Soputan.

Adding in the fact that Soputan has been restless for months and erupts frequently, I think what we have here is correlation that isn’t causation. Indonesia is one of the most geologically-active countries in the world, with 6-10 volcanoes erupting at any given time and dozens of M5+ earthquakes each year. Although the timing might be coincidental, the earthquake and volcano are not particularly close and there is little evidence of this sort of long-distance triggering of eruptions due to earthquakes.

So, the short here is that Sulawesi has just seen a stretch of terrible luck, with a major earthquake and tsunami, along with a more vigorous eruption from Soputan. That’s what happens sometimes when you live in a country surrounded by subduction zones that generate earthquakes and eruptions.