Earth Speaks in an Inaudible Voice

You can’t hear it, but our planet’s ultradeep hum could save your life.

No matter how closely you listen, you will not hear the Earth hum—but humming it is.

Far, far below the range of human hearing, waves of energy are coursing through the crust, causing the ground beneath your feet to rise and fall about three-millionths of an inch every few minutes. First detected by networks monitoring seismic activity in 1998, the tiny ripples were initially chalked up to the many small earthquakes that occur each day around the world. But studies over the past decade have proved that the hum is far too constant for that explanation.

In February, oceanographer-turned-seismologist Spahr Webb, of Columbia University’s Lamont-Doherty Earth Observatory, reported finding the hum’s likely origin: ocean waves colliding over continental shelves. When two trains of waves, traveling in different directions, smash into one another, they send a continuous cacophony down to the seafloor. That energy triggers vibrations that ripple through the planet, producing an inaudible ringing. “It’s the equivalent of a magnitude 6 earthquake occurring every day,” Webb says. “That’s the kind of energy we’re talking about.” 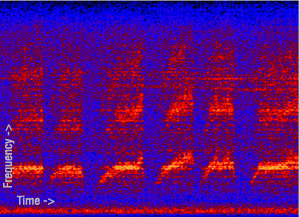 A spectrogram of ocean sounds records a tremor from an underwater volcano near Japan. Each column represents a three-minute pulse of an ultralow sound. | Image courtesy of Kate Stafford/University of Washington and Robert Dziak/NOAA Vents Program/Oregon State University

Earth’s hum turns out to be just one of the many enigmatic signals resonating in the range known as infrasound. Broadly defined as sound waves longer than 56 feet, infrasound lies below the rumbling 20-hertz bass notes at the threshold of human hearing. Hurricanes, tsunamis, and tornadoes also generate their own characteristic low-frequency noise. Scientists are now studying infrasound to learn more about those powerful natural events and how to predict them—a skill that certain animals may already have. In fact, some animals generate their own ultrabass tones for a unique type of long-distance communication.

A big reason for the surge in interest is the growing number of monitors capable of picking up reverberations from nuclear tests, a mandate of the 1996 Comprehensive Nuclear Test Ban Treaty. In 2004, the stations helped scientists prove that what was feared to be a North Korean nuclear test was in fact the detonation of a train carrying explosives. The same basic technology can document a previously unheard world of natural sound as well. For example, physicist Alfred Bedard of the NOAA Earth System Research Laboratory in Boulder, Colorado, is working on a network of sensors that can identify a tornado before it reaches the ground.

The NOAA team has set up several arrays of sensors, spaced hundreds of miles apart, that register slight variations in air pressure—a sign of a lengthy sound wave passing by. (Scientists are not sure why tornadoes pump out infrasound, but Bedard thinks it may result from a rapid expanding and contracting of the vortex.) The readings are relayed to a laboratory in Boulder, where they are analyzed for advance warning of an approaching tornado. “The goal of the weather service is to get an average warning of tornadoes of about 10 minutes,” Bedard says. “We’re detecting signals that are arriving at our sites 30 minutes prior to a tornado report.

At the University of Mississippi, physicist Henry Bass leads a group using infrasound to help predict developing storms. Hurricanes stir up ocean waves and may contribute to the planet’s overall hum. Picking out the infrasound pulses from individual hurricanes could be “a way of supplementing the information available from satellites and airplanes,” Bass says. “We don’t know if it will work, but at this point the state will try almost anything.”

Infrasound detection may also be useful for predicting volcanic events. Certain low-frequency activity may signal that a volcano is likely to spout an ash cloud, a column of jagged volcanic sand that can reach as high as 30,000 feet. An early warning would be tremendously useful, says University of Hawaii geophysicist Milton Garces, because pilots could divert their flights around the threat. Similar infrasound monitoring is already under way to detect avalanches in Utah and Wyoming. Garces has also analyzed the low-frequency sound waves accompanying the seafloor earthquake that caused the 2004 Indonesian tsunami for premonitory clues.

Crashing waves, volcanoes, hurricanes, earthquakes, avalan­ches—if it’s a powerful enough event, Bass says, it will have an infrasonic signature. Infrasound would therefore seem to be a possible explanation for the folk wisdom that animals have a sixth sense attuned to impending natural disasters. After the 2004 tsunami, for instance, rumors spread of dogs that refused to go outside, zoo animals that wouldn’t leave their shelters, and elephants that burst their chains and rushed to higher ground.

Katy Payne, a bioacoustics expert at Cornell University, has found that some animals tune in to infrasonic rumblings. While observing elephants at the Oregon Zoo a couple of decades ago, she experienced a familiar shuddering around her. As a youth, Payne had sung in a choir in a massive church with a pipe organ that pumped out extremely deep bass sounds. Sitting near those elephants, she felt the same sensation. “I was feeling a throbbing in the air,” she says. “I guessed that the elephants were making sounds below the frequency humans can hear, and I turned out to be right. There was a whole frequency down there that nobody was paying attention to.”

Subsequent studies have shown that elephants generate infrasound calls to communicate over long distances. The elephants’ calls would be deafening—around 110 decibels, as loud as a rock concert—but we cannot hear a note because the waves are so lengthy, as long as 225 feet. This part of the sound spectrum travels especially well through water, so alligators, hippos, and whales use infrasound calls as well. The cries of blue whales may reach thousands of miles undersea.

But can infrasound-using animals actually sense a tsunami or other impending disasters? Caitlin O’Connell-Rodwell, who studies elephants at Etosha National Park in Namibia, sees evidence that elephants can sense the approach of major storms, but she is not convinced by the tsunami story. There is just not much hard evidence that animals really did sense the danger. In fact, a herd of collared, satellite-tracked elephants in Yala National Park in Sri Lanka did not move at all. “There really is no short, easy answer,” O’Connell-Rodwell says.

This sixth sense is not the only infrasound-related conspiracy theory. Rumors persist that a low-frequency buzz pervades certain locations, allegedly inspiring foul moods or even suicides. In 2003, English artist Sarah Angliss built an enormous pipe capable of producing sounds below 17 hertz, then put on two concerts back to back. Two pieces in each concert included an infrasonic hum. After the infrasound-enhanced performances, she says, some listeners cited a feeling of coldness, anxiety, and shivers down the spine. Yet Bedard, who once carted his equipment over to Taos, New Mexico, to test persistent rumors that the town was haunted by an almost inaudible noise, says there is no scientific consensus on this issue: “It’s a conundrum. There’s literature that says there’s no effect, that people aren’t bothered by infrasound, and yet there’s another body of literature that says they are.”

To Bass, these unknowns are what make the study of infrasound so exciting. “You hear things all the time, and 95, 98 percent of the time you haven’t a clue what they are,” he says. “They’re going to be equally cool once you figure them out.”