Earth Puts on Its Sunday Best 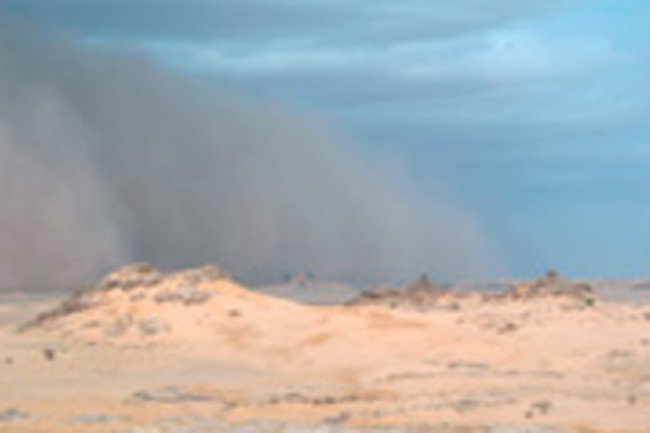 (All images courtesy of the BBC) | NULL

The BBC team behind the much-loved natural history series BLUEPLANET is back, this time with an 11-part series celebrating the vastand varied wildernesses of PLANET EARTH. The first episode (“From Poleto Pole”) is disappointingly disjointed, but then the magic begins.Each of the 10 remarkable hours that follow is devoted to a differenthabitat—mountains, deep ocean, deserts, ice worlds—and to the animalswho have learned to survive there. The BBC’s cameras plunge over thelip of the world’s highest waterfall, drop down the deepest cave shaft,and float beside the summits of Mount Everest and K2. We see pink riverdolphins presenting stones as gifts during courtship and (in tense slowmotion) a great white shark leaping from the water to close its jaws ona seal. The series airs at various times onApril 22, 23, 29, and 30 on the Discovery Channel.

DISCOVER’s Kyla Dunn spoke with producer Huw Cordey (“Caves,”“Deserts,” and “Jungles”) about what it took to gather the shots for aseries five years in the making.

Some of the cave scenes are especially dramatic. How did it feel to film them?

The Cave of Swallows in Mexico is this enormous cave chamber thatwould fit the Empire State Building in it. It just takes your breathaway. The only way down was either to use a parachute—which is reallyonly open to utter nutcases, let’s be fair—or a rope the width of yourindex finger. I remember thinking, “What am I doing? This is madness.”The most terrifying thing about the cave is that it’s shaped like abell, so you start off next to the wall, but the wall starts todisappear away from you. Soon you’re in the middle of this enormousopening where you can barely see the bottom. It’s 1,300 feet, straightdown.

In Deer Cave in Borneo, you do a tracking shot up a 300-foot guano mound...

Yes. With millions of bats roosting above it. These bats fly backand deposit their waste after a night catching insects. And that is thenutrient base for the cave system. So you’ve got dozens of differentspecies of animal living off the bat guano. Large predatoryinvertebrates like these giant centipedes, rather frightening in theirsize—about 6 inches long—that feed on other invertebrates. It’s a veryunusual food chain. It took five days to get that shot of the mound.You’re knee deep in bat pooh. Several hundred thousand cockroaches areon the mounds, getting into your clothing.

What were the biggest challenges you faced filming the “Deserts” episode?

I was very keen on filming these wild Bactrian camels that nobodyhad ever filmed before, certainly not in midwinter when they cometogether in groups. We trekked across Mongolia using GPS to find theGobi Desert—camping at minus 30 degrees Celsius [–22ºFahrenheit]. Inthe summer, it would be around plus 45ºC [113ºF], but in winter you getthe snow blowing in from Siberia. This camel is able to cope with thevast swings of temperature. There’s no other animal on the planet thatcan survive those extremes.

You were there for two months. Why was it so hard to track down the camels?

A wild Bactrian camel is one of the rarest mammals on the planet.And incredibly sensitive to humans. Often they’d spot you from about 4kilometers [2½ miles]. Then that would be it. They’d run off and youwouldn’t see them for two or three days. We had only six filmingopportunities in two months.

How has technology changed the way you make your documentaries? The technology that’s taken this series to a new level is thisincredible gyrostabilized helicopter mount. It allowed us, for thefirst time, to be far enough away from an animal to film it withoutdisturbing it. Previously in natural history aerial shots, you sawanimals running like the bloody wind away from the helicopter. Now youcan see the animal in context. For instance, the desert lions inNamibia. Suddenly you see the scale of their challenges. That endlessdune field? These three animals have to find their food supply in this.And it just speaks volumes.

EnvironmentHow Did 5,500 Miles of Seaweed Spread Across the Atlantic? Researchers Still Aren’t Sure