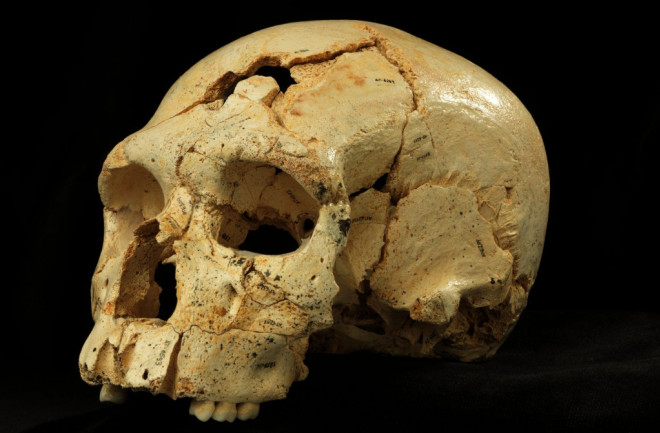 Known as Skull 17, this fossil find from Spain's Sima de los Huesos represents one of the most complete craniums of an early hominid ever found, and is just one of the site's landmark finds. Photo credit: Javier Trueba/Madrid Scientific Films It was a world not of a single population unified into one kingdom, but a violent, chaotic continent divided into houses, each representing a different family. Some of the houses were isolated; others competed for the same territory, sometimes mingling, sometimes warring. As glaciers advanced from the north, the houses were faced with a prospect familiar to fans of the popular HBO fantasy series Game of Thrones: you win or you die. "Because winter," said Dr. Juan-Luis Arsuaga, "was coming." Discussing the analysis of 17 early hominid skulls, published today in Science, Arsuaga, the study's lead author, said the new research suggested a much different evolutionary path for the genus Homo than previously thought. The hominids of Europe some 430,000 years ago, during the Middle Pleistocene, were not a single population that gradually evolved at a constant rate. Instead, Arsuaga compared Pleistocene Europe to Westeros, the war-torn continent home to Game of Thrones. A number of different early hominid populations were spread over the vast area, some evolving in isolation, others interbreeding, all of them adapting in fits and starts, and often in response to environmental changes, including periods of glaciation.

The skulls come from a group of early hominid fossils found in the nearly-inaccessible cave shaft of Sima de los Huesos ("Pit of Bones") in Atapuerca, Spain. Though a genetic analysis of one of the individuals was published last year, this study is the first to analyze all 17 skulls. Previous attempts to date the skulls and other hominid fossils from the site had yielded controversial and sometimes contradictory results. For today's findings, however, researchers used half a dozen different dating methods, arriving at an age of about 430,000 years for the remains. Researchers are not able to say definitively how the remains ended up in the shaft, but have ruled out burial or predation. Arsuaga noted that most of the skulls in today's analysis came from teenagers or young adults, age groups with the lowest probability of illness-related mortality. He believes the individuals were thrown down the shaft by other hominids, possibly as part of a ritual or a ruthless act of snuffing out the competition — another parallel to the ultraviolence of Game of Thrones. The skulls' most striking features, compared with other early hominids, were related to chewing, including a forward projecting jaw and teeth. Arsuaga suggests the individuals may have used their teeth to grasp meat while holding an animal carcass in one hand and cutting it with the other, using a primitive but unidentified tool. He stressed this theory was beyond the scope of today's paper and merely his opinion.

What the skulls do not reveal — at least not yet — is where they fit into the Homo genus. The Sima individuals had comparatively smaller brain cases than Neanderthals, leading researchers to declare the Sima individuals were at the "roots" of the Neanderthals' origins. The Middle Pleistocene period of human evolution has been hotly contested, and classification of some of the early hominids, such as Homo heidelbergensis, have been based on what Arsuaga dismissed as "very little information." The researchers involved in today's study, in fact, refused to classify the Sima hominids. Despite repeatedly suggesting that the find revealed the roots of Neanderthal evolution, Arsuaga noted "they were not Neanderthals at all" but did belong to the same clade, "just like we (humans) belong to the same clade as chimpanzees." Pressed to place the Sima hominids somewhere on our family tree, Arsuaga would say only that he would be presenting additional research on the topic later this year, and that perhaps the entire taxonomy, or grouping, of the genus Homo should be revisited. His comments echoed the call by other researchers last year for a reconsideration of how early hominids are classified based on several skulls found in an eastern European cave. In other words, this early-hominid Game of Thrones has more plot twists up its sleeve this season...