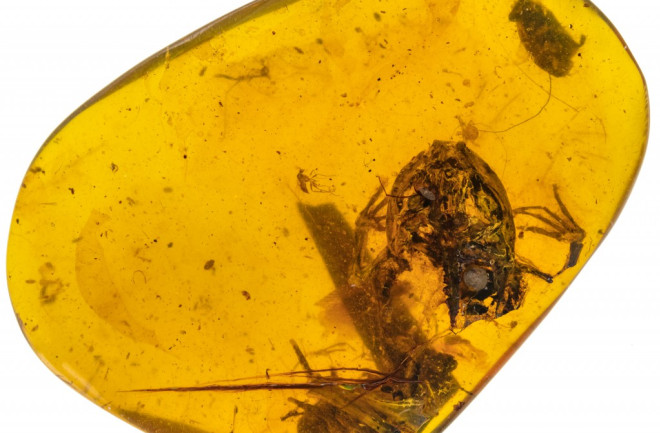 One of four frogs preserved in amber for nearly 100 million years and formally described today in Scientific Reports. (Credit Lida Xing) Frogs in a rainforest? Sure, rainforests are home to tons of them. Nothing new there — except that researchers just found four, preserved in amber and nearly 100 million years old, that suggest frogs have been hanging out in that environment much longer than previously shown. Anura, the amphibian order that includes frogs and toads, has been around for at least 200 million years. But the frog fossil record is spotty, and the earliest examples of the animals appear to have lived in bodies of freshwater within semi-arid, or, at most, moderately wet environments. Until today, evidence suggested that the first frogs to call a tropical rainforest home were no more than 66 million years old. (If that date rings a bell, yep, it's right around the time of the End-Cretaceous mass extinction that offed the dinosaurs (and many other animals). There is some evidence that frogs were among the beneficiaries of the extinction event: They appear to have expanded in diversity to fill newly vacated ecological niches, including in rainforest environments, as vegetation rebounded post-Dino-apocalypse.) Today, however, researchers formally describe four frogs preserved in amber from the mid-Cretaceous, clocking in at about 99 million years old. The new species, Electrorana limoae, is the earliest example of an anuran living in a rainforest. How do we know it was a rainforest? So glad you asked.

Artist's rendering of Electrorana limoae, the earliest known frog to live in a rainforest. (Credit Damir G Martin) The specimens came from the same famous amber deposits of Myanmar that have given researchers insects, spiders, ticks, birds and the occasional non-avian dinosaur. Other flora and fauna present include bamboo-like vegetation, mosses and tiny crustaceans called ostracods, all of which, when taken together, point to a hot, humid, tropical rainforest that had freshwater habitats, with some of the forest running along the shore of possible marine environments. As an added bonus, the state of preservation allowed the team to study the frogs in 3-D, a rarity for anuran remains of this age. The paper appears today in Scientific Reports and it's open access, so have fun, kids.