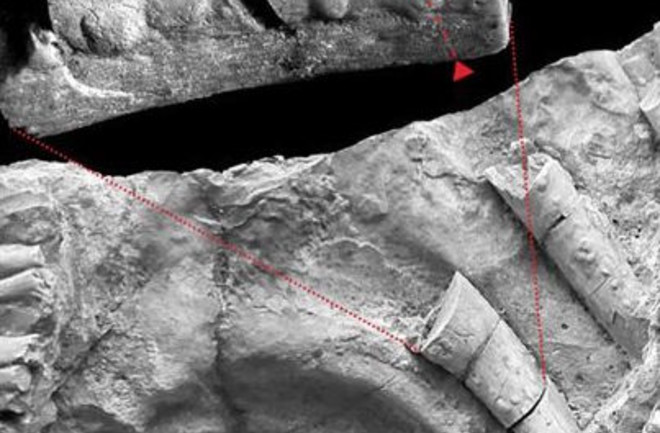 One of the oldest diseases to haunt our species — the lung infection known as pneumonia — is actually a lot older. Evidence of pneumonia, and possible tuberculosis, has turned up in a marine reptile that’s 245 million years old.

Researchers analyzed a fragmentary specimen of “Proneusticosasiacus*, a Middle Triassic marine reptile, that had anomalies on several ribs. Specifically, they found a bunch of blebs, or protrusions. Using X-ray microtomography, the team took a closer look.

(Wondering about those quote marks around the genus? It’s because the actual identification of the specimen is not resolved. Some researchers, including the authors of today’s study, have interpreted the fragmentary material as belonging to another marine reptile, Cymatosaurus, but it’s currently not possible to know for sure given the fragmentary nature of fossils representing both animals.)

The team was able to rule out potential causes for the abnormalities, including healed fractures, cancer, fungal infections and even scurvy (hey, marine reptiles don’t have access to much citrus) based on the location, shape and other characteristics of the blebs. The pattern of abnormal bone growth around them also told the researchers that the infection that caused them was chronic, lasting for months if not years.

The lesions, which appear on at least four of the animal’s ribs, are similar to damage done by the infamous bacterial infection tuberculosis. Meanwhile, additional abnormalities on the animal’s vertebrae were consistent with Pott’s disease, a bone-invading form of tuberculosis.

Humans are not, of course, the only animals who suffer from TB; it’s also been documented in other mammals, as well as an assortment of reptiles. But while early evidence for it goes back to a marsupial fossil that’s upwards of 3 million years old, finding hints of it — or a similar infection — nearly 250 million years ago is a surprise.

The researchers have no way of verifying which bacterium caused the infection that led to the blebs in this rather unfortunate marine reptile — 245 million years is far too long ago to hope for preserved DNA that might reveal exactly what the pathogen was. But there is one other intriguing thing about the discovery.

By the way, yes, pneumonia and tuberculosis are two different things, so don’t send me angry emails berating me for using the terms synonymously. I’m not. I’m basing this post on the study itself, which uses both terms when describing the fossil evidence for a respiratory infection in this particular animal.

Tuberculosis can cause pneumonia (and when it does, it’s particularly nasty pneumonia), but that’s not its only danger. An active TB infection robs victims of energy and can invade bones, leaving a trail of damage in its wake. One of the reasons TB casts such a dark shadow through human history is, of course, that it’s contagious (albeit not extremely so).

Which brings us to the other curious tidbit from today’s paper.

Researchers know next to nothing about “Proneusticosaurus” (or Cymatosaurus, for that matter), and not much about similar marine reptiles, called nothosaurs, that were swimming about Triassic World. It’s generally believed, however, that nothosaurs were the seals of their day and lived a semi-aquatic lifestyle. Today’s seals happen to be the marine mammals most susceptible to TB.

While the coincidence is by no means conclusive, it does raise a number of avenues for future exploration, including whether “Pro”/Cy lived like a seal and, if so, whether there is something about the animals’ semi-aquatic ways that puts them at particular risk for the infection.