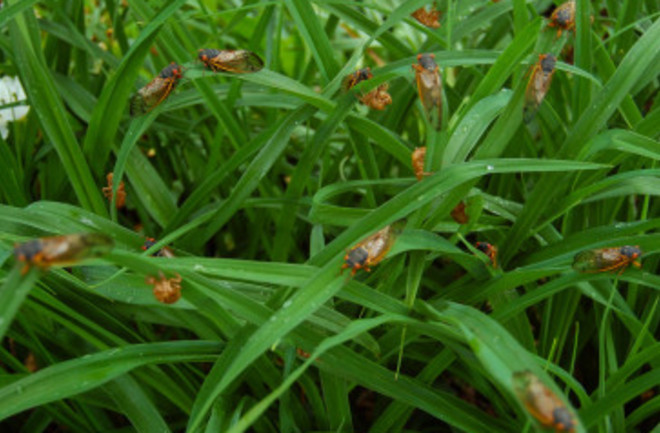 With thousands of newly-hatched 17-year cicadas blanketing the Eastern U.S., residents would be forgiven for not noticing a less conspicuous absence: birds. Bird surveys have repeatedly shown a mysterious trend of a population downtick in areas of cicada emergence.

It's the exact opposite of what might be expected---crows, blue jays and cardinals are among the species affected, and they feed on insects. And it's fascinated ornithologist Walter Koenig for years. “The birds are just not coming in there to eat them,” says Koenig, a senior scientist at the Cornell University Laboratory of Ornithology. “Why aren’t the birds taking advantage of the cicadas? The fact that there may not be birds around seems like a good explanation.”

Now, this spring is the first time he’s been able to measure his theories against a real-life emergence.

The emergence of millions of cicadas at the exact same time in 13- and 17-year cycles across the East Coast and Midwest is one of the natural wonders of the world---although many people consider the sudden presence of millions of huge, red-eyed insects a horror rather than a wonder.

Brood II cicadas are now buzzing and laying eggs throughout their range, from North Carolina to Connecticut. Andrew Liebhold, a forest pest expert with the U.S. Forest Service’s Northern Research Station in Morgantown, West Virginia, says that the main reason cicadas all come out at once is as an evolutionary adaptation to avoid being eaten by birds. “You will probably never notice 99.99 percent of all insect species because they never exhibit outbreaks,” he says. “That’s because birds keep insect populations in check.” “The amazing thing about periodical cicadas is they have figured out a way around that,” says Liebhold. So many cicadas suddenly appear on the landscape, that predators, including birds, can fill their bellies and barely make a dent in the population.

Where Are the Birds?

It was a surprise, then, when bird watchers in recent decades reported seeing fewer birds, not more, in areas where cicadas had emerged. Could it be that the din of the cicadas’ mating buzz drowning out the birdsong, so that the bird watchers only thought there were fewer birds?

Cicadas aren't toxic for birds to eat, but could it be something else about the cicadas was driving the birds away? Or is there another explanation? Koenig and Liebhold teamed up to find out. They began by looking in the data from the Breeding Bird Survey, a yearly census of bird populations collected by the U.S. Geological Survey since 1966. During a Breeding Bird Survey, volunteer scientists and expert bird watchers across the country drive their assigned routes during breeding season, stopping at pre-determined locations to look and listen for birds.

The key to Koenig and Liebhold’s research was that in the Brood X emergence years of 1987 and 2004, Breeding Bird Survey volunteers in the brood’s range were asked to gather information about cicadas as well as about birds. At each stop along their routes they were asked to note whether they could hear cicadas calling or not. “That was fabulous,” says Koenig, who is an expert at crunching Breeding Bird Survey data. “It allowed us to test those hypotheses.” Koenig reasoned that if the cicadas were driving the birds away, bird numbers would be lower in areas where cicadas were heard and higher in nearby areas where cicadas couldn’t be heard. If the cicadas were drowning out the birds’ songs, then the number of birds would be lower in areas where cicadas could be heard, but remain the same in nearby areas. If, however, there were actually fewer birds in the area, there would be fewer birds both in areas where cicadas could be heard and in the nearby areas without cicadas. And that’s what the data showed. They also showed the number of birds bouncing back the very next year.

The plot thickened when Koenig looked at the Christmas Bird Count, another annual bird survey. These data showed fewer crows, blue jays and other insect-eating birds in areas of cicada emergence, six months before the emergence happened. The normal bird population had dipped, as if anticipating the insect surge. “There are no cicadas around; nobody is thinking of cicadas,” says Koenig. “And there was already a decline. That’s what made me think that maybe I’m not making this up after all.” After proving that there are actually fewer birds in areas with a cicada emergence, the team’s next question was, “Why?” It's a question they're still trying to answer today.

Koenig thinks it’s going to take more than Breeding Bird Survey data to find out. “One of the enduring mysteries of evolutionary biology is how we have gotten these 13 and 17 year cycles,” he says. Koenig suspects that cicada and bird populations mutually influence each other, but he hasn't figured out an experiment that will tease out all the dynamics of the relationship yet. As a self-proclaimed "data guy"---he experienced his first cicada emergence as an adult this month---Koenig hopes that a fieldwork-oriented grad student will take on the task of tracking individual birds through an emergence to solve the mystery. “I bet there is something really cool going on that we just don’t know about yet.”

Madeline Bodin writes about science and the environment for national magazines and the occasional newspaper from her home base in Vermont.