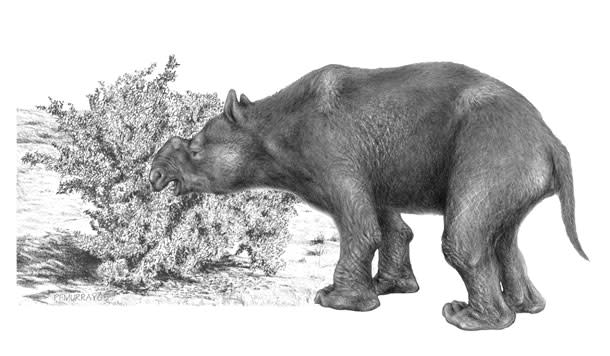 In Australia, an ancient murder mystery is coming to a riveting conclusion, thanks to an unusual clue – not a fingerprint, or a bloody weapon, but fungal spores preserved in fossilised dung. The spores belong to Sporormiella, a fungus that only grows in mammal and bird droppings. Large plant-eaters provide it with vast banquets. In turn, the fungus reveals how many big vegetarians were living in the neighbourhood. Scientists have used these spores to study the deaths of the giant animals that once grazed North America – “megafauna” such as mammoths, woolly rhinos, and more. Now, it’s Australia’s turn. By using Sporormiella records, along with other buried clues, Susan Rule from the Australian National University has found strong evidence that acquits a changing climate in the death of Australia’s giants. Instead, her study points the finger squarely at humans. Australia was once home to giant versions of its current animals, as well as strange forms with no modern counterpart. These included Megalibgwilia, an echidna the size of a sheep; Procoptodon, a huge kangaroo more than twice the size of today’s reds; Thylacoleo, a lion-like hunter with a bone-crushing bite; Diprotodon, a hippo-sized wombat; and a giant monitor lizard, even bigger than the Komodo dragon. By 40,000 years ago, all of these animals were extinct. This was shortly after humans first arrived on the continent, and many scientists think these facts aren’t coincidental. Humans either killed the beasts themselves, or made the land inhospitable by regularly burning it – a practice that still happens today. But there’s an alternative theory: Australia’s climate had been drying out for a long time, forcing the large animals to the edge of extinction. Humans merely nudged them off. Or perhaps, humans and a changing climate were equally culpable. None of these competing explanations has gained a clear upper hand. It’s not clear precisely when the megafauna died out, and places that hoard their remains are few and far between. To settle the debate, Rule and her team travelled to Lynch’s Crater, a huge lake in north-east Australia. The team drilled into the crater and extracted two cylinders of rock, or “cores”. Each one represents fossils, soils and chemicals that have been laid down over the course of 130,000 years. They are time capsules, where millennia of Australia’s history have been crushed into solid rock. The Sporormiella spores within the cores suggested that giant animals were common in Australia until around 41,000 years ago. At that point, the spores almost completely vanished. This gives us a very precise estimate for when these animals finally died out. Around 100 years after this fungal vanishing act, the land also experienced more fire, as evidenced by the growing amount of charcoal in the cores. Two centuries after that, the local plants also changed. Pollen grains, preserved in the cores, showed that rainforest plants, like flowers and conifers, started to decline. They were replaced by grasses and sclerophylls – the trademark plants of the Australian bush, such as eucalyptus. This accurate timeline shows that Australia’s climate and plant life were stable for at least five millennia before the great beasts died out, and only started changing later. Rule’s study also shows that the megafauna were relatively unaffected by earlier climatic upheavals. Australia experienced two great periods of climate change around 120,000 and 75,000 years ago, when it became cooler and drier. Neither was accompanied by a fall in Sporormiella. The climate shifted, but the megafauna took it in their stride. Their numbers (and thus the fungi in their dung) only declined after humans arrived. Stephen Wroe, who has championed the climate hypothesis before, says that the new study is a “very useful contribution”, but Rule has assumed that Sporormiella reflects the presence of Australia’s megafauna. “Even in North America, Sporormiella is associated with many species, not just big plant eaters,” he says. Jacquelyn Gill , who used the dung fungus to study the loss of North America’s megafauna, has no such objections. She says, “Understanding the causes of megafaunal extinctions in North America have been complicated because humans arrived while climate was changing rapidly. This study neatly avoids that problem.” Gifford Miller, who studies ancient climates, notes that there’s some uncertainty about the precise dates in Rule’s timelines, but that their timings relative to each other are “very strong”. He adds, “[The study] suggests that the arrival of humans indeed is the leading explanation for the demise of Australia's megafauna.” As the megafauna died, the plants they ate began to thrive. That provided more fuel for severe fires that were lit either by lightning strikes or by the newly arrived humans. The fire left the charcoal that Rule would eventually find. It also changed the vegetation even further, killing off the sensitive rainforest plants and allowing the tolerant sclerophylls to prosper in their ashes. A similar chain of events probably happened in North America, according to Gill’s research. Understanding what killed the megafauna isn’t just an academic exercise in historical finger-pointing. What happened then can tell us about what is happening right now. Australia’s plants also changed during the two earlier periods of climate change, but they reacted just as strongly (if not more so) to the loss of the megafauna. The demise of these iconic animals had just as much an impact on their environment than big shifts in climate across an entire continent. Today, other giants, such as elephants and rhinos, are also at risk of extinction. “Large animals are some of the most threatened species on the planet today, and unlike past extinctions, the causes of the modern ones aren’t controversial,” says Gill. “The study is important because it suggests that those extinctions may have a legacy of landscape change.” Reference: Rule, Brook, Haberle, Turney, Kershaw & Johnson. 2012. The Aftermath of Megafaunal Extinction: Ecosystem Transformation in Pleistocene Australia. Science http://dx.doi.org/10.1126/science.1214261Image: Diprotodon by Peter Murray More on the megafauna: