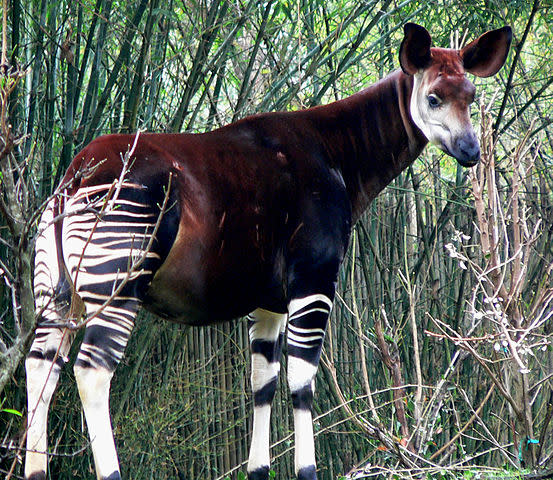 Try to read up on the okapi and you won't find much. This African mammal is most often seen next to the adjective "elusive." But even if we can't find any okapi, we can learn about their lifestyle through their DNA—and we can find their DNA in their feces. The okapi is an ungulate, like a cow. Or really like a giraffe, its closest relative. It has an elegant face, a long bluish tongue, and a zebra-striped rear end. It lives in the dense rainforest of the Democratic Republic of Congo, chewing tree leaves in privacy. No one in the Western world knew the animal existed until the 20th century. "One of the great things about studying okapi was that there was so little known about them in advance," says David Stanton, a PhD student at Cardiff University in the United Kingdom. "So in this sense, everything that we found out was a surprise." Stanton and his coauthors just published an investigation of okapi society. Rather than search for actual wild okapi (elusive, remember?), they scoured the Réserve de Faune à Okapis, a national park in the DRC, for dung. The researchers gathered 208 fecal samples. They were able to extract and sequence DNA from 105 of these samples, and confirmed that all 105 came from okapi. And even without seeing any wild animals, the scientists could piece together a few clues about the okapi's lifestyle from that genetic material. To start, they analyzed whether okapi that are more closely related live (and poop) closer to each other. Do the animals live in family groups? The answer was no. Except for mothers with offspring, "related individuals do not appear to live closer together than unrelated individuals in any meaningful sense," Stanton says. The researchers concluded that okapi are solitary. They could also get a peek at the animals' sex lives through their dung. To do this, the scientists used a computer program that sifted through the genetic sequences and looked for siblings. The program found one pair of full siblings (animals with the same mother and father). But there were around 200 sets of half-siblings among the animals. This suggested that okapi are polygamous; they don't stick with one mate. Finally, the researchers investigated how widely okapi move around. Judging by dung piles that had identical DNA, individual okapi didn't wander very far. Almost all of these matching piles were less than a kilometer apart. Male okapi, though, were less closely related to each other than females. This suggests that before settling into a home range, males roam farther from where they were born. This system is not unusual for mammals, though sometimes females are the ones who do the roaming, or "dispersing." "The most surprising thing," Stanton says, "is how far this animal seems to be able to disperse." The team gathered dung samples from all across the park, which covers nearly 14,000 square kilometers. Yet the genetic analysis found no subgroups within the okapi population. It seems that when an okapi disperses, it "moves relatively freely through a national park that is the size of a (very) small country," Stanton says. "We found no evidence that barriers such as rivers or roads affected this movement at all." Okapi are endangered, and knowing more about their lifestyle can help humans protect them. Beside being a worthy target of conservation, Stanton says the okapi is "a fascinating animal scientifically." More than 15 million years of evolution separate the animal from its closest relative, and its feeding behavior is unlike any other African ungulate. Conserving okapi may not make them any less elusive, but at least we'll know this weird species is still out there somewhere.

Image: by Raul654 (via Wikimedia Commons)