Dung Beetles Transmit Worms During Sex — And It's A Good Thing 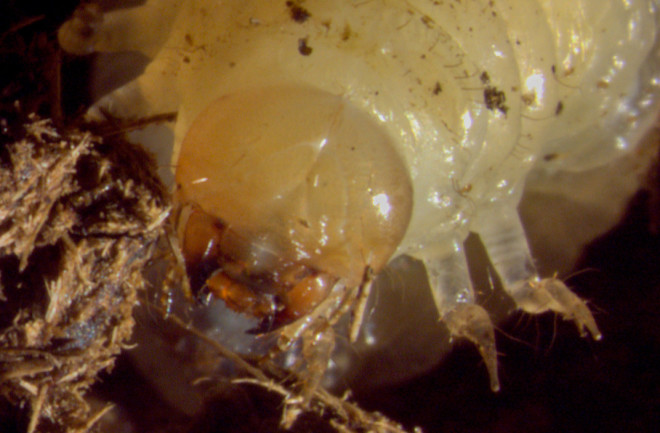 Horned beetle Onthophagus taurus. (Credit: PNAS) As humans, sexually-transmitted microbes worry us. They can cause some pretty nasty diseases, and we've learned to take precautions. But, some creatures actually welcome the tiny hitchhikers that can jump ship during mating. For dung beetles, the act of procreation can sometimes come with an extra benefit: Nematode worms. Just as there are countless species of bacteria living on and in us that help our bodies out, not every sexually-transmitted creature is out to cause harm. For the dung beetle Onthophagus taurus, one of those is a type of nematode worm that helps cultivate the right mix of bacteria and fungi to ensure the beetle larvae stay fed and healthy.

Diplogastrellus monhysteroides live on and around the dung beetles, probably because the beetles attract a selection of bacteria the worms like to eat. As it turns out, many of those bacteria are bad for the beetles health. After the worms eat the harmful bacteria, different species are allowed to flourish, some of which help break down tough plant matter for the dung beetles to eat. Ultimately, both the worms and beetles get a meal out of their partnership, a classic example of symbiosis. This is crucial for the beetles' larvae, who are raised in what's called brood balls — hollowed-out balls of dung that provide both food and shelter for them. The larvae are surrounded by food, but they rely on bacteria in their environment to break down many of the plant compounds in the dung before they can actually digest it. This takes the right mix of bacteria, and researchers from Indiana University have now found that the nematodes are instrumental in curating the collection of bacteria surrounding the beetle larvae. The researchers looked at the populations of bacteria with and without the worms present, and they found that numbers of bacteria that aided in digestion went up when the worms were there and potentially dangerous bacteria were more scarce. In experiments in the lab, they also watched what happened when dung beetle larvae were raised with or without the worms. Those who grew up with the worms got bigger, an indication that they were better fed and something the researchers tie to the worms' bacterial cultivation. Giving your offspring a wormy inheritance is the caring thing for beetle mothers to do, and the researchers show that not only do the mothers pass worms on to their children, they also transmit them to their sexual partners, and vice versa. The worms can often be found in beetle genitalia, and the researchers tracked what happened when both males and females without worms mated with partners who did have them. All of the worm-less beetles were found to carry nematodes afterward, a strong indication that they were being passed through sex. The beetles, unlike us, can actually look forward to the microbes they might be gifted during a sexual encounter.