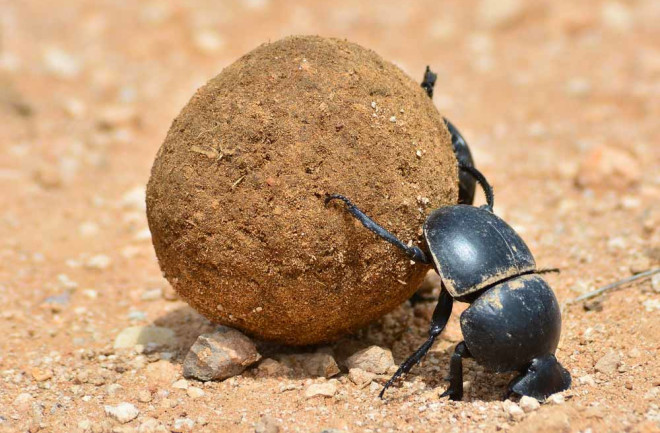 Dung beetles can navigate using polarized light, but only nocturnal dung beetles can use the dim light of a crescent moon. (Credit: Michael Potter11/shutterstock)

Like humans throughout history, it turns out that dung beetles are celestial navigators. Steering is important to dung beetles. When a choice load drops, they want to grab their ball and roll away in as straight a line as they can manage. In this sense, they’re not so much navigating (which implies a destination), but they are orienting themselves by the skies.

Dung beetles who work during the day can use the sun. But nocturnal dung beetles rely on moonlight – and that waxes and wanes throughout the month. It turns out that dung beetles rely specifically on the polarization of light – the orientation of the light waves – to orient themselves. And that can be much trickier when moonlight is scarce. Researchers led by James Foster from Lund University in Sweden set out to discover just how much polarization changes over a lunar cycle. They published their results Jan. 28, in the Journal of Experimental Biology.

Reading a Map of the Sky

Reading polarization maps isn’t unusual for insects. Many do so during the day, when sunlight entering through Earth’s atmosphere polarizes, creating a map of light angles across the sky to creatures who can see such things. And moonlight has the same effect. But as the moon wanes to crescent and then New Moon, when no moon is visible, the polarization decreases.

Dung beetles who usually work during the day can use bright polarized moonlight to navigate, provided you can wake them up, says Foster. But unlike their nocturnal brethren, they can’t use dim polarized light, like a crescent moon. “So there’s a lot of adaptation in the nocturnal species that make them good at collecting light,” Foster says. “They’re much like radio telescopes. They combine wide angles to reclaim signals, at the sacrifice of spatial scales.”

Conversely, the nocturnal species do just fine substituting bright polarized sunlight for moonlight – again, once you convince them to do anything at all during their normal off-hours.

Even the nocturnal beetles have some trouble when moonlight is truly scarce. “Presumably they use the stars,” Foster says, “But it’s a lot worse.” Previous studies have also looked at whether beetles can use the Milky Way’s bright band to orient themselves, and found that they can – though it’s still less bright, and therefore less helpful, than full moonlight. They mostly rely on the contrast between the Milky Way’s bright splashes of stars and darker dusty bands.

Light pollution can also confuse the beetles. The extra, mostly unpolarized light swamps the beetles’ vision, making it more difficult to orient themselves – but usually only when the moonlight is dim to start with. Under a Full Moon, they’re able to ignore most light pollution.