A good defence was a vital part of life in the Cretaceous. Plant-eaters needed effective ways of warding off the crushing jaws of Tyrannosaurus and its kin. Some species like Triceratops and Ankylosaurus had fairly obvious protective equipment, including horns, frills and armoured plates. But others lacked defensive armaments, and had to fend off predators through subtler means.

Take Hypacrosaurus. It was one of the duck-billed dinosaurs known as hadrosaurs, and like most other members of the group, its soft body lacked any obvious protection. Its main advantage was size; a fully-grown adult was an immense animal that almost rivalled T.rex in height. Its name even means "near the highest lizard". And if a large size is your only defence, it's a good idea to grow quickly.

That's exactly what Hypacrosaurus did. Lisa Noelle Cooper from Kent State University has shown that the dinosaurreached its towering size in record time and grew much faster than the predators that hunted it. Other dinosaurs sought refuge behind shields and armour, but this otherwise defenceless species hid in plain sight, behind a large bulk attained at an extraordinary rate. 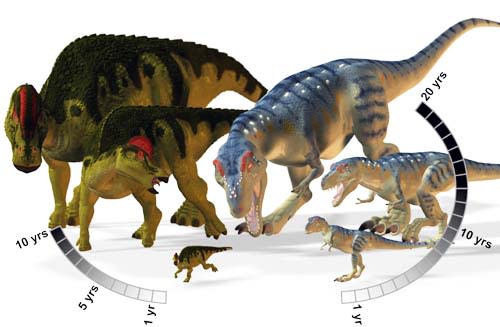 Together with Andrew Lee, Mark Taper and legendary palaeontologist Jack Horner, Cooper looked at the telltale rings in the leg bones of one Hypacrosaurus specimen (see bottom picture). Like the rings of trees, these bands represent a year of growth. By analysing them, Cooper could reconstruct the early years of this long-dead individual.

She calculated that the animal was about 13 years old when it died, but the increasingly narrow spacing of its growth rings showed that it had clearly finished growing. The rings also revealed that the hadrosaur went through a massive early growth spurt that catapulted it to full size in just 10-12 years. 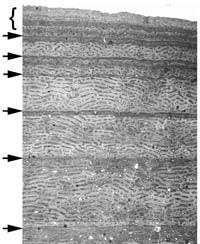 Hypacrosaurus shared its homelands with four predators, including Troodon, a small but intelligent hunter, and no less than three tyrannosaurs - Albertosaurus,

and Gorgosaurus. To see if its fast growth was a defence against these hunters, Cooper compared Hypacrosaurus's speedy spurt with those of Albertosaurus and Tyrannosaurus (standing in for Daspletosaurus).

She found that unlike Hypacrosaurus, the giant predators were late bloomers. Albertosaurus took 23 years to reach its full stature, while Tyrannosaurus took 36 years to crawl to adulthood. That means that Hypacrosaurus grew 2-4 times faster than the predators that hunted it. Even though Albertosaurus would eventually outsize its prey, it was only half-sized by the time its quarry was fully grown.

It's difficult to generalise to an entire species from a single specimen, but these results fit with earlier estimates using other duck-billed dinosaurs. For example, a closely related species called Maiasaura is thought to have put on over a tonne of weight every year during it first few years of life.

This pattern of growth is what you would expect of hunted species, whose young are likely to die early at the jaws of predators. That was certainly the case for Hypacrosaurus and other hadrosaurs - the bones of juveniles have been found inside the skeleton of a Daspletosaurus, and one Hypacrosaurus leg bone actually has a tooth of a predatory dinosaur embedded inside it!

In response to these dangers, species tend to grow quickly and start reproducing early. Indeed, the growth of Cooper's Hypacrosaurus sped up dramatically in the first 2-3 years after hatching and subsequently slowed down. Recent studies suggest that this turning point marks the age at which dinosaurs become sexually mature, so this creature was probably fertile just a few years after emerging from its egg.