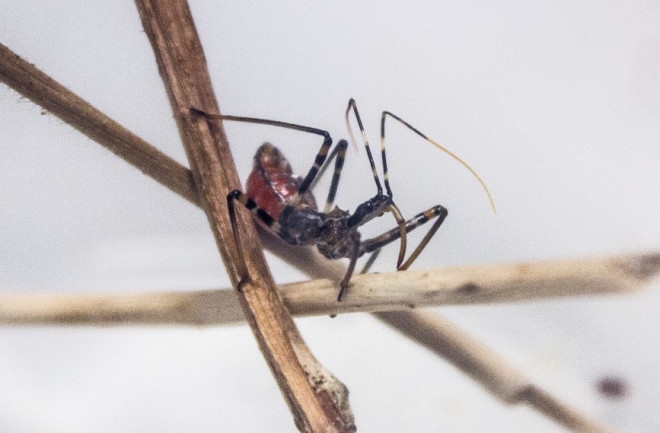 A well-fed assassin bug in the lab at the University of Queensland. Photo Credit: Christie Wilcox In one of his journal entries from his time aboard The Beagle, Charles Darwin told of a "great black bug" and how it boldly sucked blood from his finger through its large mouthpart. The creature was likely Triatoma infestans, a kissing bug—one of the almost 7,000 species of assassin bug that are now described. Like its kin, it's armed with an ominous looking proboscis which it uses to slurp up its meals. But the kissing bug is one of only a few assassin bugs with vampiric tastes. Most are much more murderous, preferring to use potent venoms to paralyze a their prey so they can liquify them from the inside out, then suck their soupified meal through their needle-like mouths. It was that behavior which intrigued Andrew Walker, a molecular entomologist and postdoctoral fellow in the Institute for Molecular Bioscience at The University of Queensland. He and his colleagues were curious what the paralyze then liquify-and-slurp venom looked like. "We wanted to see if assassin bugs had venom that was similar in composition to other venomous animals due to convergent evolution, or if the different feeding physiology would result in a different composition," he said. And when their research began, essentially no one has looked at their venoms—"almost nothing was known about them." But what they found was much more surprising: the animals are equipped with two different venoms, which are made and stored in distinct compartments—a first for any venomous animal.

The dual-venom wielding Pristhesancus plagipennis. Photo Credit: Jiayi Jin While it makes sense to use two different venoms for offense and defense since they might need to work on very different critters, that kind of finely tuned system isn't the easiest to evolve, said Walker. "To do this you would need specialised anatomical structures that allow you to select which venom is appropriate and somehow control its movement into the delivery apparatus and then into the animal being injected with venom." But apparently, that's precisely what the assassin bugs have, according to the study published last month in Nature Communications. The authors basically threw the toxinological kitchen sink at 'bee-killer' assassin bugs (Pristhesancus plagipennis), scanning and visualizing their tissues with with an MRI scan, a micro-CT scan, and confocal laser scanning microscopy to figure out all the moving parts. And that allowed them to see that there were different compartments to the venom gland which could store completely separate secretions. "We also saw multiple valves and pumping structures, as well as innervation of these structures from the central nervous system," said Walker, which allow the animal to switch between the two venoms.

A reconstruction of the bugs unique glands from the MRI scans; the main gland is in red, while the smaller compartment containing the new venom is in dark blue. Figure 1a,b from Walker et al. 2017 Then, since they thought they knew what was in the venom from their earlier work on the animals, they extracted RNA from each venom gland compartment, which would tell them what proteins are actively being made by that tissue. "The results were very clear," Walker said. "The venom we'd previously analysed came from the bigger compartment, whereas the smaller compartment was producing a very different secretion we'd never seen." But if it wasn't the venom they'd extracted... what was it? First, they had to figure out how to get the animals to give up the goods. Initially, they were collecting venom using tried and true methods for spiders—gentle electric shocks which cause the muscle to squeeze and squirt out a bit of venom—but that was only getting the bigger compartment's venom. It was careful observation of the animals' behavior that revealed another way. "Many of these bugs will produce a little bit of venom when you just annoy or threaten them—but only a little bit," Walker explained. "When this was analysed, it turned out to be our 'missing' secretion from the smaller compartment of the venom gland."

How you harass an assassin. Video Credit: University of Queensland When they injected the electrically milked venom into crickets, it rapidly paralyzed them. It also turned out to be full of digestive enzymes called proteases, so the team concluded the larger compartment contained the predatory venom used during the hunt. But the venom carefully collected from annoyed bugs was pretty mild in comparison—it wouldn't be any good for capturing or killing their meals. "So we suspect this one might be specialised for defense," Walker said. They're not the only venomous animals with two very different venoms, note the authors and Nick Casewell, a venom biologist with the Liverpool School of Tropical Medicine who was not involved in the study. Still, he said, "the concept of venomous animals delivering dichotomous venoms, in other words venoms for different purposes, is relatively new and has only previously been described from scorpions and cone snails." The really intriguing part is the compartmentalization. "Unlike those previous examples, this study demonstrates that assassin bugs have a venom system that is actually segregated anatomically with different glands producing different venoms for either predatory or defensive purposes," Casewell continued. Casewell complimented the work for its "robust integration of lots of different types of experimental data...something that is not easy to do on non-model—or largely unstudied—animal." He also found the paper "very interesting" because it "really highlights how little we know about the venom systems of many venomous animals," he said, and "unveils a new level of complexity in venomous animals."

One of many dual-venomed species? Perhaps. Photo Credit: Jiayi Jin And it raises the question of whether there are other species with dual venoms that remain undiscovered given that so few animals have received such careful examination. Detailed studies simply haven't been carried out on the hundreds of thousands of venomous animals that exist on this planet, particularly in small insects where specialized compartments could easily go unnoticed. "These findings seem likely to encourage other scientists to explore—or re-explore—the venom systems of other venomous animals to investigate the generality of dichotomous venoms in the animal kingdom," said Casewell. The dual venoms are especially exciting from a bioprospecting perspective, because each is a complex cocktail of more than 100 different components with very different functions. "A venom specialised for hunting is likely to be a good source of bio-friendly insecticides," Walker explained, while "a venom used defensively would be expected to be a good source of pain-inducing toxins, which are great tools with which to investigate the function of pain sensation, both in healthy physiology and in disease states like chronic pain." The next step is to really dive deep into what each of these venoms does by characterizing the activities of the different toxins within them—and to see if any seem like potential candidates for pharmaceuticals or other useful chemicals.