Drying out the cane toad invasion 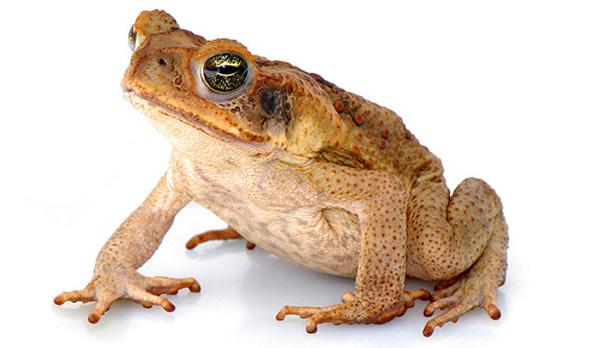 In June 1935, the cane toad began its invasion of Australia. Sailors brought the animal over from Hawaii in an attempt to control the cane beetle that was ravaging Australia’s sugar cane crops. It was a mistake that the continent’s wildlife would pay for. The toad did nothing to stop the beetles. Instead, it launched its own invasion, spreading across the continent from its north-eastern point of entry. As it marched, it left plummeting populations of native species in its wake. The toads are born conquerors. Females can lay 35,000 eggs many times a year, and each can develop into a new frog in less than 10 weeks. They’re unfussy eaters and they’ll munch away on bird eggs, smaller native frogs and more. And they have large glands behind their heads, which secrete a milky poison. Local predators (or domestic pets) that try to eat them tend to die. Now, Daniel Florance from the University of Sydney has found a clever way of corralling the cane toad invasion. He realised that humans have continued to give the toad a hand, long after we first brought them to Australia. By creating dams and troughs, we provided the toad with watery staging grounds that allowed it to spread across otherwise impassably dry land. By blocking the toads from these hubs, we could prevent them from spreading over 857,000 square kilometres, an area of land the size of Pakistan. As Florance says, it’s not a “silver bullet for toad control”, but it can certainly help to cut the numbers of these troublesome trespassers. Cane toads are less dependent on water than many other frogs, but they’re not adapted to truly dry climates. While some frogs burrow underground or create protective cocoons, cane toads simply lose water until they die of dehydration. In the heat of Australia’s dry season, they need bodies of water to survive. Fortunately for them, humans have provided them with moisture galore, in the form of cattle troughs, boreholes, and dams. Florance fenced off these artificial water sources in the Northern Territory during the dry season, when temperatures can regularly climb as high as 37 degrees Celsius. He used wire and metal posts to prevent the toads from jumping over, and buried cloth to prevent them from digging under. Once the barriers were set up, Florance evicted all the toads within them, more than 2,000 in total. The fences worked. In the following months, Florance couldn’t find any toads within the protected areas (although he found several that died at the fences, trying to get in). He fitted radio-trackers to 60 individuals and followed them in their quest for water. Near the fenced areas, all of these toads died within three days. Most of them kicked the bucket after just twelve hours, and they had lost around half of their body weight by that point. Meanwhile, almost all of those released near unfenced water survived. 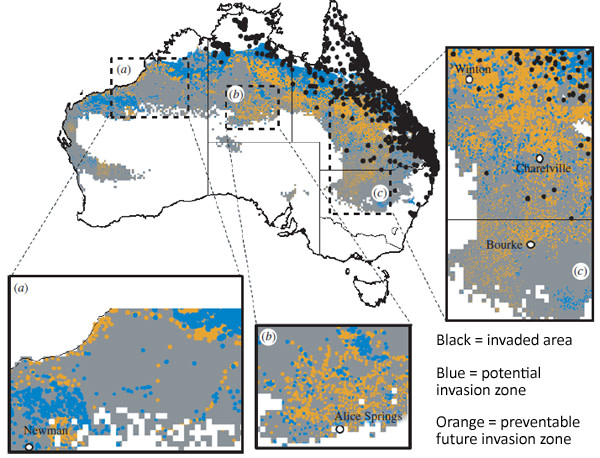 Without any countermeasures, Florance predicts that the toads will eventually colonise the top half of Australia, spreading over 2.2 million square kilometres. Using a simulation, he calculated that he could reduce that area by 38 per cent if he kept the toads away from man-made water sources. Conservationists could even achieve that by focusing their efforts at 40 to 50 critical “corridor” sites, during the country’s dry season. The fences don’t seem to harm any other native animals. Small native frogs have adapted to Australia’s harsh climate and they have ways of dealing with the heat without human help. Some died near the fences, but only very few. Meanwhile, larger animals like birds, pythons or mammals are more than able to hop over the relatively short fences. And Florance thinks he could make the fences even more friendly to locals by installing “gates”, made of mesh that’s large enough to let small frogs through, but small enough to keep out the bulky cane toads. The same ideas could help to halt the spread of other invasive species. These incursions don’t usually happen in a gradually spreading wave – they stem from specific staging grounds. For example, the Argentine ant, another superb invader, spreads by travelling long distances to new areas and setting up colonies that then seed the surrounding lands. But Florance’s strategy is not foolproof. In some areas, natural waterholes will always allow toads to stage fresh invasions. Blocking artificial sources could keep the toads from spreading to certain strategic areas, but it’s not going to turn back the invasion in any way. If this seems like a shallow victory, remember that against cane toads, victory of any form would be welcome. Since their invasion began, conservationists have tried all sorts of tricks to control them. And as fond as Australians are of “cane toad golf” and “cane toad cricket”, no measures have actually worked on a large scale. Scientists have tried to find viruses, bacteria or parasites that could hit the toads with debilitating diseases, but to no avail. Others have tried to simply catch the animals or to use pheromones to lure them into traps, but none of these methods are feasible on a large scale. Some have considered releasing sterile males that would prevent other males from fostering the next generation, but that approach would only work if we release far more sterile toads than the entire existing population! Even bouts of arthritis can’t stop them. In the light of these failures, conservationists are getting desperate. Some are playing at damage control, trying to train native predators to avoid the taste of toads. And you know things are dire when people optimistically greet the discovery that meat-eating ants are devouring the toads. Florance’s study isn’t going to magically solve the problem, but it’s a step in the right direction. Reference: Florance, Webb, Dempster, Kearney, Worthing & Letnic. 2011. Excluding access to invasion hubs can contain the spread of an invasive vertebrate. Proc Roy Soc B http://dx.doi.org/10.1098/rspb.2011.0032Image by Sam Fraser-SmithMore on frogs: