Don’t Try This at Home: Flamingos Get Their Blush From Oily Rump Glands 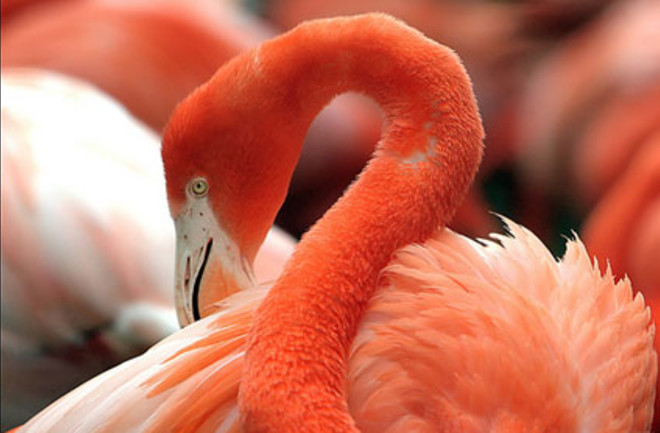 Researchers found new evidence of the importance of make-up while studying Spanish flamenco dancers flamingos. The scientists discovered that the birds augment their signature coloring by applying tints drawn from their own glands--and they use their painted plumage to attract mates. The hue of the leggy birds' feathers come primarily from the pigments in their diet, but researcher Juan Amat found that they also secrete the colored pigments, called carotenoids, from their preen glands. Flamingos (and many other birds) press their heads to the preen glands at the base of their tails to pick up feather-protecting oils, which they then spread around their bodies. The researchers realized that those oils contain pigments, ranging from red to yellow, by keeping an eye on the flamingos' feathers and behavior: They noticed that the coloring of the birds was brightest during the mating season, and quickly diminished after they found a mate. Amat told BBC News:

"The rubbing is time-consuming," Dr Amat told BBC News. "And the more frequently the birds practise it, the more coloured they appear. If the birds stop the rubbing, [their] plumage colour fades in a few days because carotenoids[pigments] bleach quickly in the sunlight."

So the birds go through extensive preening rituals

, using their cheeks to rub the colored oils into their feathers, in the hopes of attracting mates (similar to characters from the Jersey Shore

that the flamingos who paid more attention to their plumage were more successful in their mating endeavors:

"We found that the more coloured birds started breeding earlier than paler ones," explained Dr Amat. "So by mating to a colourful bird an individual may increase its reproductive success, as from previous studies we know that the first pairs to start breeding gain access to the best breeding sites."

The researchers published their findings

in the journal Behavioral Ecology and Sociobiology. It isn't just the male flamingos that work hard to attract mates; the game goes both ways with this species. Amat's team noticed that the females actually spent more time coloring their feathers than the males. And, as he told BBC News

, they reaped the rewards for this extra investment:

"We have data indicating that females make-up much more often than males - just like in humans," he told BBC News. "Also, we know that flamingos apply make-up more often in better habitats, and that the more coloured birds obtain food of better quality."

(photos) Not Exactly Rocket Science: The renaissance of technicolour dinosaurs continues (and the gloves come off…)