The view of Earth from 22,000 miles away in space helps explain what's going on. 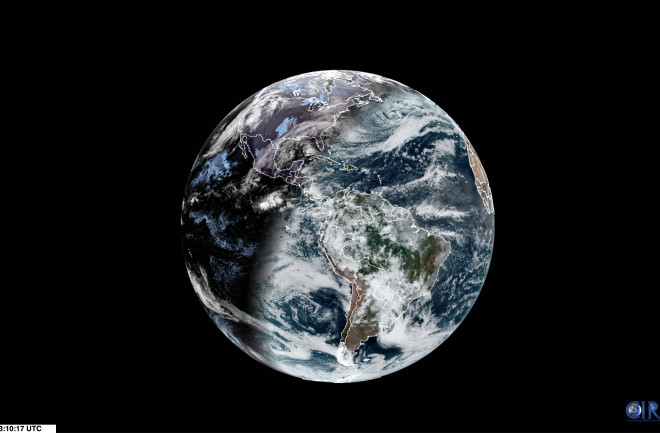 For many people, this time of year brings joy.

I'm no exception, but it hasn't been solely because of parties and presents. I've been particularly happy lately for another reason: My shadow has been getting shorter and shorter.

December 21st was the day of the winter solstice in the Northern Hemisphere. This meant that at high noon, the Sun was lower in the sky — and thus my shadow was longer on the ground — than on any other day of the year. Since that low point, the Sun has been arcing higher across the sky, lengthening each day and also shrinking my shadow.

Just for the record: I'm not scared of my shadow. To the contrary, its ever-shortening profile is helping gird me for the brutal days of winter ahead. It's doing that by reminding me that we're finally on the solar upswing toward the long, languid, beers-in-the-backyard days of summer.

The winter solstice happens, of course, right before the holidays. This is a period in parts of the Northern Hemisphere when the days are so fleeting one can be forgiven for reflecting on the waxing and waning of seasons. Given my own interests, I got to wondering what the seasonal shift marked by the solstice on December 21st looked like from space.

For a whole-Earth view, I turned to the GOES-16 weather satellite. Here's what I came up with:

As Earth spun on its axis, the satellite kept perfect pace in its geostationary orbit 22,000 miles above a single spot on the surface. From this vantage point, GOES-16 watched as the shortest day in the Northern Hemisphere progressed from east to west. (In the animation, the sequence of one day repeats three times.)

The progressing diagonal line separating night from day occurs because Earth's axis is off kilter — it's tilted 23.5 degrees with respect to the plane of our orbit around the Sun. On this day of the winter solstice, Earth's tilt causes the Northern Hemisphere to lean farther away from the Sun than on any other day of the year.

That, in turn, means the winter solstice brings the longest night, as well as the shortest day — and longest shadows.

Also note that as day progresses, the northernmost reaches of our planet remain dark. This is because Earth's tilt is keeping the Sun below the horizon, enforcing the darkness of the polar night.

The pattern is reversed in the Southern Hemisphere, which leans closest to the Sun at this time of year. So late December brings the longest day and shortest night — the summer solstice. For the southernmost regions, the Sun circles the horizon all day, resulting in 24-hours of sunlight. Check it out:

This view of the Southern Hemisphere captured by the GOES-16 satellite shows that most of Antarctica experienced 24 hours of full solar illumination during summer solstice on December 21st, 2019. (Source: CIMSS Satellite Blog)

The arc of brightness seen in this image from GOES-16 is indicative of 24 hours of daylight over Antarctica on December 21st. For an animation of images like this showing the progression of the day, click here.

Before I go any further, I should say that the terms used to describe the solstices can be a little confusing. On December 21st, the Northern Hemisphere experienced the winter solstice, whereas in the Southern Hemisphere, it was the summer solstice. On June 21st, it'll be reversed.

To avoid that potentially confusing dichotomy, the terms 'December solstice' and 'June solstice' are also used.

Another potential point of confusion: These events don't technically fall during an entire calendar day. They occur at a particular moment of a particular day.

The December solstice we recently experienced occurred at the very moment that the Northern Hemisphere was leaning farther from the Sun than at any other time (and the Southern Hemisphere closer). That occurred precisely at 04:19 UTC on December 22.

Before I wrap it up, I thought I'd share the animation above consisting of images acquired by the Meteosat-9 satellite in 2010 and 2011. It starts with the September equinox. This occurs late in the month, when when the plane of Earth's equator passes through the center of the Sun. At this time, day and night are of equal duration in both of hemispheres.

The animation progresses to the December solstice, then the March equinox, which is just like its counterpart in September. And it concludes with the June solstice. This occurs late in the month, when the Northern Hemisphere receives the most amount of light during the year, and visa versa in the south.

Up here in the north, December 21st brought the official start to astronomical winter. But meteorological winter is something else. It is defined as the coldest three month period of the year, and it runs from Dec. 1 through the end of February.

But my shadow is definitely getting shorter. So I can live with the cold and snow still to come.