Dolphins Cooperate by Talking It Out 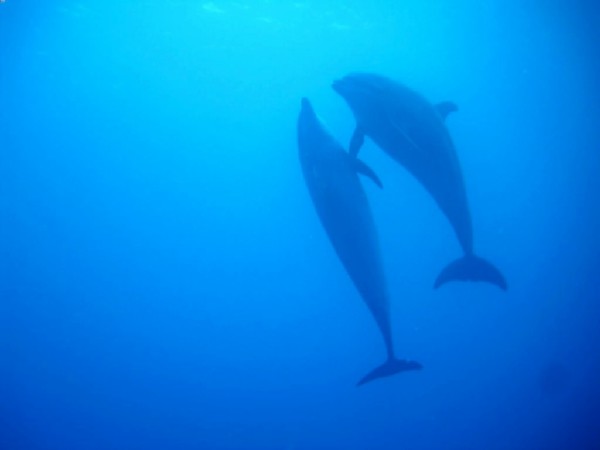 How do you know when animals are working together? Just because two animals got something done jointly doesn't mean they cooperated. They might have succeeded by dumb luck, or trial and error. Scientists who study animal minds, though, would really like to know when cooperation happens on purpose—and how animal partners manage to communicate with each other. Studies in capuchin monkeys and chimpanzees hinted that the primates coordinated their actions by glancing at each other. (But this video shows some chimps who were stumped by a cooperative task, unless their partner was a human.) Baboons smacked their lips while working together. Lionfish used certain fin displays before hunting together. Dolphins often cooperate to hunt. They may use regionally specific tricks to trap prey—dolphins in Florida, for example, slap their tails to scare fish out of the water and into their partners' mouths. Researchers from the University of Southern Mississippi and a Florida facility called Dolphins Plus studied captive dolphins to learn how they might communicate while working together. They did their experiments in a lagoon holding six Atlantic bottlenose dolphins, three male and three female. The researchers challenged the animals using a device similar to a Christmas cracker. It was a PVC cylinder with a loop of rope at either end. The tube came apart in the middle and was stuffed with snacks: fish, ice, cubes of gelatin. The easiest way for dolphins to get at the goodies would be for two of them at a time to grab the rope loops and pull. For each experimental trial, the researchers dropped the snack-filled tube into the lagoon and waited to see what happened. They did this 24 times, making video and audio recordings at the same time. Only two of the six dolphins, both male, were interested in the PVC container. In four trials, a dolphin managed to get the container open on his own. The other 20 times, the two dolphins worked together to open it. From the audio recordings, it wasn't possible to tell which whistles and clicks came from which of the six dolphins in the lagoon. But the researchers saw a distinctive change in the chatter when the two males were working together to open the tube. There was significantly more noise while the dolphins were cooperating, compared to when one dolphin was working on the tube alone, or when no one was interacting with it. Presumably, the increased noise was coming from the two dolphins who were working together. The researchers saw that one particular type of sound increased, called a "burst pulse." This is a rapid set of clicks. Other sounds, like whistles, didn't increase while dolphins were opening the tube. So for these dolphins, burst pulses seem to be the language of cooperation. The finding is also a good clue that the dolphins really were cooperating. If each dolphin were just focused on his own work, there shouldn't have been any change in their vocalizations when two animals were pulling on the ropes, as opposed to one. The researchers hope to eventually figure out which sounds come from which dolphins. That could tell them more about dolphin cooperation and communication (besides just how to say "Pull harder!").