Dogs Notice When People (or Other Dogs) Sound Sad 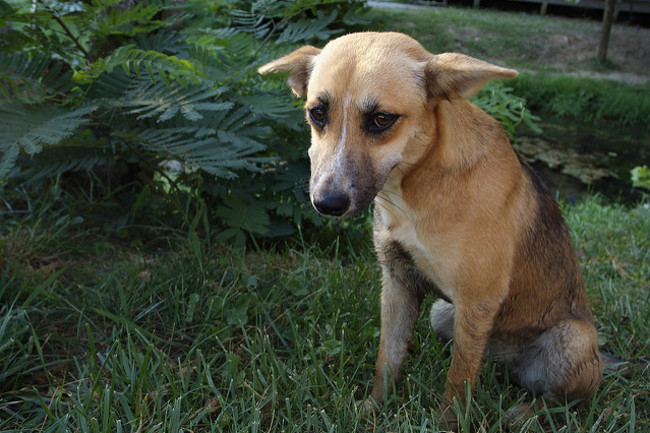 Your dog may act like a good listener—but does she really notice when you're feeling down? Or does she just know how to deploy a wet nose and a tail-wag to earn treats? A new study says negative emotions are contagious for dogs. They'll pick up a companion's bad feelings just by sound, whether that companion is human or canine. "Emotional contagion" is the most basic form of empathy, write Annika Huber of the University of Vienna's Clever Dog Lab and her colleagues. We're not talking Counselor-Troi-level empathy, strong enough to reach between starships. Emotional contagion is just the automatic, unconscious matching of two animals' emotional states. Earlier studies have found evidence of this feeling-sharing in primates, rodents and birds. Studies of pet dogs have found signs of empathy, too: When people pretended to cry, dogs offered comfort. Dogs also responded negatively to the sound of babies crying. (But when owners faked a heart attack, their dogs failed to solicit help from a bystander. Thanks a lot, guys.) To learn more about emotional contagion in dogs, Huber and her colleagues recruited 53 adult pet dogs. The dogs were a variety of breeds, as well as mutts. Then the team tested the dogs' responses to sad sounds. In different trials, the dogs heard recordings of humans either laughing or crying. They heard other dogs barking during play, or whining when they were lonely. They also heard sounds that shouldn't carry any emotion, including crickets, birds, rain, and neutral human speech. The dogs heard the sounds coming from a speaker in an experimental room while their owners sat nearby (wearing headphones and reading a magazine, so they wouldn't sway the results by reacting to the sounds themselves). Researchers analyzed videos of the trials to see what reactions the dogs had. Did they look to their owners, or walk over to them? Did they look at or approach the loudspeaker? Did they have a negative or uneasy reaction, including barking, whining, scratching, yawning, licking their lips, stretching, shaking, wagging their tails, panting, or freezing? The researchers found that dogs showed more of these behaviors in response to emotional sounds (humans laughing or crying; dogs barking or whining) than non-emotional ones (nature sounds; neutral human talking). The dogs also reacted more strongly to the sounds of negative emotions than positive ones. After hearing a dog whining or a person crying, they showed more of the uneasy behaviors, and dogs that froze stayed frozen for longer. However, there was almost no difference between a dog's reactions to hearing a human in distress and another dog in distress. "Despite equal degrees of attentiveness," the authors write, dogs had a stronger negative reaction to hearing the negative emotions of people and other dogs. This could make sense evolutionarily, they add. If an animal is displaying negative emotions because it's in a dangerous situation, it would be wise for nearby animals to pick up on those feelings. Paying attention to other animals' positive feelings is less likely to keep you alive—though it might help you perfectly time your request for a game of fetch.