Dogs Are Poor Problem-Solvers, And It's Our Fault 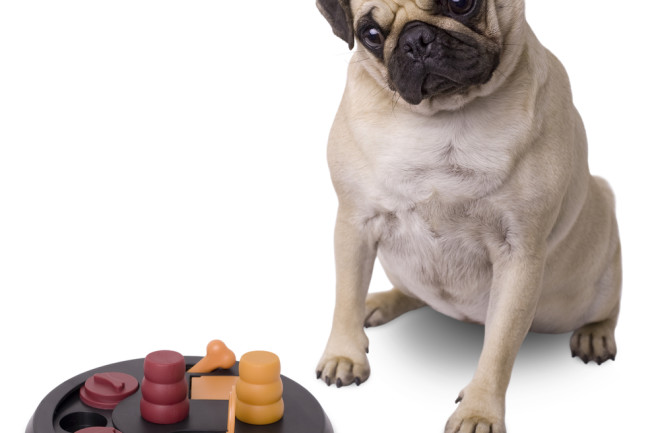 Note: This was not the actual study setup. But it's still cute. Credit: GorillaAttack / Shutterstock Most pet owners know that dogs are masters at the art of getting humans to obey their wishes, whether it’s a trip outside or retrieving a tennis ball that rolled under the couch. For decades, researchers have assumed that dogs’ imploring gazes were a brilliant problem-solving strategy: “I’ll just get the human to do it.” But a new study suggests that dogs may have become so dependent on human cues that they give up easily when confronted with a challenging problem.

For instance, in a 2003 experiment, researchers challenged dogs and wolves with an impossible puzzle: a tasty treat trapped in a box, with no way to remove it. While the wolves kept trying, the dogs quickly gave up and looked to the nearest human for help. “This has traditionally been interpreted as the clever, socially advanced, response to this problem,” wrote researcher Monique Udell and her colleagues, but they say it could also be a sign that dogs are less persistent and less independent problem-solvers than wolves – especially when there’s a human available to ask for help. Or maybe dogs are just better at knowing when they’re barking up an impossible tree. Udell and her team reasoned that if looking to humans for help really was a brilliant strategy for tackling unsolvable problems, then dogs shouldn’t resort to it when facing a puzzle they could actually solve.

To test that, the researchers presented a puzzle box containing a treat to 10 pet dogs, 10 shelter dogs, and 10 wolves raised by human caretakers. It was a much easier puzzle than the 2003 task; during a test run, an eight-week-old puppy solved the puzzle. Each dog or wolf had two chances to solve the puzzle: once in a room by themselves, and once with a familiar human standing a few feet back, looking at the box but not interacting with the animal. Although dogs and wolves all showed interest in the puzzle box at first, wolves were much more persistent than dogs. They spent more time looking at the box and more time in contact with it, physically working on the puzzle. And 80 percent of the time, the wolves solved the puzzle and got the treat. Dogs, on the other hand, didn’t stick with the task, and they sought help more quickly. When there was a human in the room, the dogs spent more time looking at the human, and less time working on the puzzle box, compared to wolves. Not surprisingly, the dogs had a much lower success rate: only about 10 percent.

But when researchers gave the dogs a third chance to solve the puzzle – this time with active encouragement from a human – they showed much more interest in the puzzle. Dogs with human encouragement spent more time looking at the box and more time in contact with it than they had when the human didn’t get involved.

Udell and her colleagues published their results in the Proceedings of the Royal Society B, and they say it’s a sign that dogs aren’t using human cues as a clever way to get around otherwise impossible challenges. Instead, it appears that dogs are generally less persistent and more dependent on human cues than wolves.

That makes sense, since dogs have spent thousands of years evolving to get along with humans, and most modern dogs spend their lives depending on humans for food, water, toys, and access to the outdoors. “Instead of human-like behavior, pet dogs instead demonstrate behavior that is liked by humans – they look to us for guidance and in many cases show a childlike reliance on our actions,” said Udell. “In the long run this may be the best strategy for dogs, especially if behaving this way can lead to greater success in human homes and better relationships with their owners over their lifetime.” That’s a strategy that has worked out pretty well for the species. But along the way, it may have also cost them their independence.