Dogs and Hugs May Not Mix 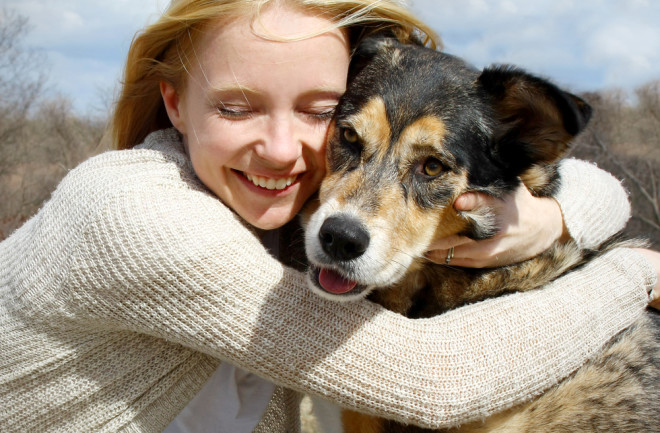 This dog doesn't exactly look thrilled. (Credit: Christin Lola/Shutterstock) It's hard to resist wrapping your arms around a furry pup, but our well-intentioned hugs might be stressing dogs out. While it's natural for us to demonstrate caring by wrapping our arms around our companions, such behavior is likely activating a primal stress response in dogs, says Stanley Coren, a professor of psychology at the University of British Columbia who specializes in canine psychology. When it comes time to choose between fighting and fleeing in a stressful situation, dogs are cursorial creatures, meaning they are naturally disposed to running away, he says. When we grab them in an embrace and hold on tight, they feel anxious and constrained, because there's nowhere to run. In other words, our behavior communicates the opposite of what we intended.

Coren studied 250 pictures of dogs getting hugs from humans, and looked for telltale signs of distress, which are well-documented. While growls and bared teeth are easy-to-spot behaviors of an unhappy dog, there are more subtle signs as well. Unhappy dogs consciously avoid eye contact by looking away, flatten their ears, lick their lips, close their eyes, raise their paws and flash "half-moon eyes" — that look where a crescent of white shows in their eyes. Coren used Google search terms such as "hug dog" and "love dog" to gather the images for his analysis. He wrote about his informal analysis in an article for Psychology Today. His findings, however, have not been published in a peer-reviewed journal. Photos from the internet don't convey context about the situations dogs were photographed in, which places some limits on Coren's data. And, again, the findings weren't published in a peer-reviewed journal. Still, his observations were striking: In over 80 percent of the pictures Coren scrutinized, the dog receiving the hug looked uncomfortable and displayed those telltale signs of anxiety. Just 7 percent of the dogs actually looked like they were cool with the embrace.

How about a belly rub instead? (Credit: Liz Randall/Flickr) While we may have only the best intentions, hugs could incite aggressive behavior if the dog feels overly threatened. Coren says that hugging may be to blame when dogs bite small children in some cases.

Humans and Dogs — Not the Same

Studies have shown that hugs decrease stress in humans and might even strengthen our immune systems, illustrating the positive effect that deliberate physical contact has on our lives. Why wouldn't we want our canine companions to share in those benefits? Yes, physical contact is an important element of our relationships with dogs, but Coren's findings highlight the importance of being sensitive to our canine companions' perspective. Instead of giving dogs a hug, it may be better to approach them on their terms, with a kind word, friendly scratch behind the ears or a yummy treat.

More From Discover
Mind
Why Alone Time Carries a Stigma (Even If It Feels Great)
Mind
What Makes Us Introverts, Extroverts or Ambiverts?
Health
Ibogaine: The Psychedelic Drug That Could Fight Addiction
Mind
The Psychology of Why Consumer Rewards Programs Suck You In
Mind
Awkward Silences: Maybe It's Time to Stop Avoiding Them and Start Embracing Them
Mind
Why People Become Overwhelmed by Conspiracy Theories — and How To Help Them
Recommendations From Our Store
My Science ShopCosmos: Possible Worlds
My Science ShopStrange Science
My Science ShopEinstein's Universe
My Science ShopElements Flashcards
Shop Now
Stay Curious
Join
Our List