Dogs Align Themselves to Earth's Magnetic Field When Pooping 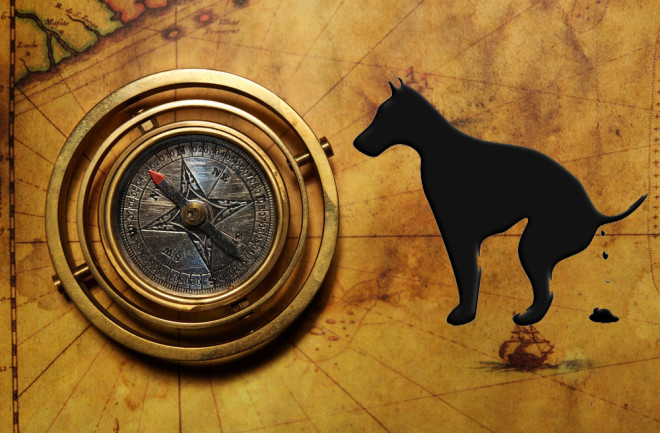 Dogs seem to do their business wherever they feel like it, sometimes in very unfortunate places like neighbors’ yards and kids’ sandboxes. But scientists now say it isn’t random: dogs actually align themselves with the Earth’s magnetic field before dropping a doody.

An ability to sense the orientation of the Earth’s magnetic field has been detected in migratory animals such as birds, whales and bees. They are thought to use it for navigation. But this study is the first to find such “magnetosensitivity” in dogs. The researchers spent two years gathering the necessary data (i.e., watching 5,582 pee breaks and 1,893 defecation stops) in Germany and the Czech Republic. After ruling out the influence of wind, time of day, and sun angle, the researchers found that the only factor that played a role in determining how and where the dogs popped a squat was the Earth’s magnetic field.

When the field was stable, dogs preferred to squat along the North-South axis and actively avoided the East-West axis. That’s without the influence of leashes, fire hydrants or fences.

The researchers don’t know if the 70 dogs in the study actually “felt” the magnetic pull, according to the paper published in Frontiers in Zoology. But the scientists base their conclusion on the fact that during periods of instability in the Earth’s magnetic field, when the sun’s magnetic field and solar winds vary its orientation, the dogs no longer showed a preference for the North-South axis.

Next time you take Fido for a walk, bring a compass and see if the results hold true.