Do You See What Shrimp See?

The mantis shrimp can pick up on ultraviolet, infrared—and circular polarization. 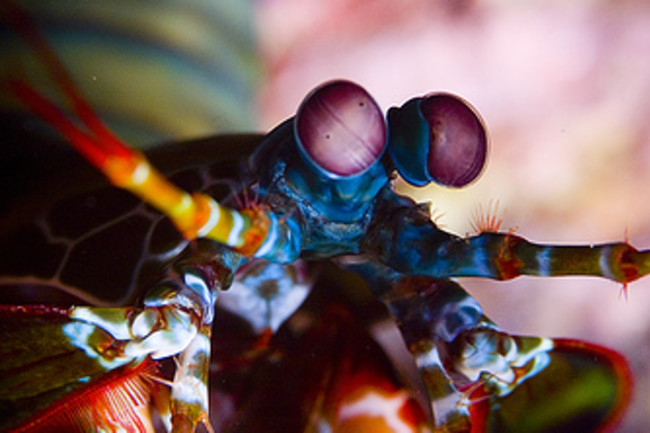 What does the world look like through the eyes of a mantis shrimp? It’s not a question most of us would think to ask, but a new study has given us the answer: It looks like nothing humans (or any other animals) have ever seen.

It turns out that these exotic sea critters—affectionately known to the researchers in the study as “shrimp from Mars”—can see a kind of light that, as far as we know, is not apparent to any other animal on the planet. Not only that, but certain parts of the shrimps’ bodies can reflect the same kind of light, creating a signal only other mantis shrimp can see. Thanks to this phenomenon, the creatures have their own visual code—a completely private way to communicate with one another as they scuttle across the ocean floor.

As for what one mantis shrimp looks like to another, Tom Cronin, a biologist at the University of Maryland Baltimore County and one of the study’s authors, says that “it’s impossible to know.”

For more information on the super-sight of mantis shrimp, see the related Discoblog post.