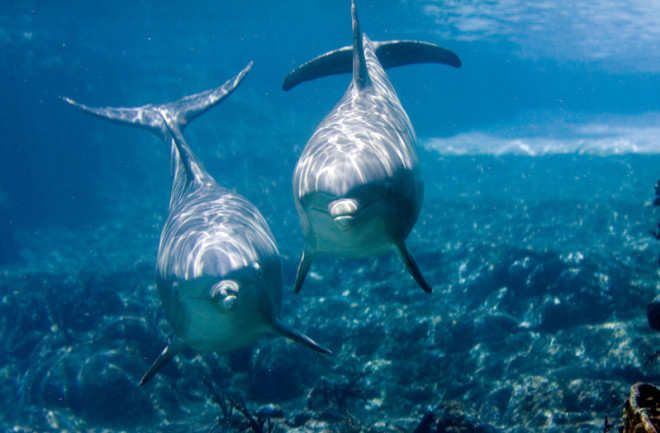 You would always be smiling, too, if you were high as a kite. Photo by Flickr user jeffk42

The BBC will be airing a cool new underwater documentary on Thursday called Dolphins: Spy in the Pod, where carefully disguised cameras were used to film the daily lives of everyone’s favorite marine mammals. But the most interesting detail seems to have been leaked on Sunday: during the documentary, some of the dolphins reportedly used a pufferfish to get stoned.

“Even the brightest humans have succumbed to the lure of drugs and, it seems, dolphins are no different,” said The Sunday Times. The article goes on to describe how the team got footage of dolphins gently harassing a pufferfish, which led to the dolphins entering “a trance-like state after apparently getting “high” on the toxin.”

“After chewing the puffer and gently passing it round, they began acting most peculiarly, hanging around with their noses at the surface as if fascinated by their own reflection,” said Rob Pilley, zoologist and one of the producers of the documentary. “This was a case of young dolphins purposefully experimenting with something we know to be intoxicating.” And so it would seem that we can add drug use to the long list of dolphin bad behaviors, (a list which includes bullying, rape and murder, for the record; illicit drug use seems a minor offense in comparison).

It sounds too awesome to be true—which means it probably is.

I’m not convinced. Dolphins are curious and intelligent, so I have no doubt that they would investigate a strange animal like a puffer. They might see what happens, explore the texture, taste, or smell of this novel creature in their midst, as they do in this video:

But do they intentionally harass them to get high? I doubt it. I guess it’s possible—but if they do, they’re playing a very deadly game, and one that I doubt is much fun for anyone involved.

When harassed, pufferfish first are true to their names and enlarge their bodies to make themselves less palatable. But if that’s not enough, they have the ability to secrete tetrodotoxin (TTX) to ward off potential predators.

The argument being made by The Sunday Times (and the filmmakers, it seems) is that dolphins are intentionally using TTX to get “high”. I just don’t buy it. A curious bunch accidentally indulging in a little puffer poison? Sure. But I’m to believe that dolphins are using tetrodotoxin regularly to get baked? Or even worse, include these toxic treats as a part of their “diet“? No way. Not even dolphins are crazy enough to take that risk.

Tetrodotoxin simply doesn’t make sense as a drug (and let’s be honest—if it did, humans would be snorting it off bathroom counters already). In very, very, very low doses, tetrodotoxin causes numbness, tingling, and the slight lightheadedness that fugu, the Japanese preparation of raw pufferfish flesh, is known for. I guess it’s possible to see how one might relate these mild effects to the “high” feeling that comes from THC, the main ingredient in marijuana*, but it’s a stretch to say the least. Every illicit drug has one thing in common: they alter minds. It’s right there in the definition of narcotic. Tetrodotoxin, however, doesn’t cross the blood-brain barrier; it doesn’t change perception or enhance sensation. People get poisoned with TTX every year, and there’s a reason you don’t hear anyone describing the experience as a ‘high’: that’s not how tetrodotoxin works.

Mind-altering is right there in the definition of narcotic, according to Merriam-Webster —one thing that TTX doesn’t do.

Tetrodotoxin is a potent neurotoxin that shuts down sodium channels, silencing neural activity. In low doses, it numbs. In slightly higher ones, it paralyzes. In between it slows heart rate, plummets blood pressure, and causes respiratory distress. It’s a poison, not a party drug. There is nothing fun about it.

Perhaps even more importantly, though, tetrodotoxin doesn’t make sense as a narcotic because it is far more deadly than any of the substances used recreationally. For all the stink you hear about illicit drugs, they’re harmless in comparison. THC is a gentle compound that acts as a relaxant and appetite stimulant. For a person to die from orally ingesting marijuana, they would have to eat 1 lb or so of the most potent pot on the market in one sitting (which is probably why there has never been a case of fatal THC overdose). Tetrodotoxin, on the other hand, killed 179 people and poisoned another 467 in Japan alone from 1974 to 1983.

It might not look like much, but tetrodotoxin is one of the deadliest chemicals on Earth. Image from Wikipedia.

Even if we give the dolphins their weight advantage, as mammals, it still would only take a few milligrams of TTX to kill one—a dose which, when provoked, puffers can secrete. Once poisoned, it can take up to an hour to begin feeling the effects, which start with numbness, tingling and lightheadedness. Quickly, things get much, much worse.

Paralysis spreads from the face throughout the body, to the point where any movement becomes difficult and even resting is described as uncomfortable. Muscles weaken, speech slurs, and breathing becomes labored. Within an hour or two, victims can lose feeling and control of their entire body. Around four to six hours after a lethal dose, the victim’s respiratory system succumbs.

Sublethal doses are no picnic, either. Some have described becoming completely paralyzed head to toe, unable to move yet fully conscious, an aware and alert mind trapped in a motionless body. Because TTX doesn’t cross the blood-brain barrier, the mind is clear, unaffected. “The victim, although completely paralyzed, may be conscious and in some cases completely lucid until shortly before death,” says the FDA. It’s a particularly terrifying state of mind referred to by physicians as cerebromedullospinal disconnection, pseudocoma, or, most simply, locked-in syndrome.

I find it tough to believe that dolphins are so careful that they can walk the fine line between tingly lips and maddening paralysis, especially when different individuals of the same species of pufferfish can carry vastly different amounts of toxin in their tissues. Instead, what I hear in the BBC’s description is naive animals learning a hard lesson: soon after ‘puffing’ on puffer, young male dolphins were filmed behaving strangely, even near-motionless at the surface. It doesn’t sound like a happy high; it sounds like the first stages of tetrodotoxin-induced paralysis, with the dolphins instinctively (and perhaps luckily) hovering in shallow water to retain the ability to breathe. It seems unlikely that they interact with puffers like this routinely. Even if the dolphins were pleasurably intoxicated, the inability to react quickly would leave them dangerously exposed to predators like large sharks, not to mention the inherent risks to their lives associated with the toxin involved.

While dolphins may play with puffers to see them expand, or even foolishly put one in their mouths on occasion, I doubt they’re “using” them with any regularity. Instead, the young male dolphins that were caught on camera by this crew probably played a little too rough with their toy and paid an uncomfortable price for their mistake. Lucky for them, only a hidden camera was watching.

That said, as a scientist that studies the evolution of toxins and toxicity, I kind of hope I’m wrong on this one. The use of tetrodotoxin by dolphins would be really, really cool, especially since it seems to make so little sense. Not a whole lot is known about recreational drug use in animals, and every case tells scientists something new. From a philosophical standpoint, what does it say about intelligent beings if, as a group, we cannot resist getting high? How much are we willing to risk to experiment with dangerous drugs, and what are the evolutionary costs? Though, personally, I’m more interested in the nitty-gritty questions, like how does the recreational use of toxins alter the evolution or expression of the toxins themselves in the animals that produce them?

Still shot from the upcoming BBC special Dolphins: Spy in the Pod

Lastly, if dolphins do puff for pleasure, theres one more question I have to ask: could someone please pass Flipper a joint already? That poor fish has suffered enough.