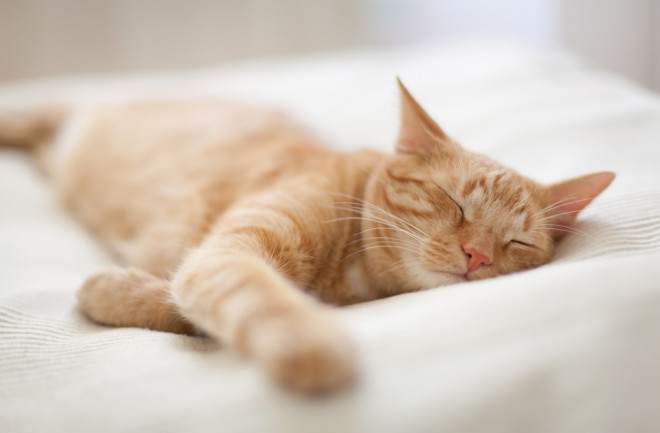 Curiosity doesn’t always kill the cat. And for a while, that's left scientists wondering if cat’s dream. They certainly sleep. A cat in a typical 24-hour cycle, whether it’s a tabby at the foot of your bed or a lioness in the African savannah, can sleep upward of 20 hours. This is to say, 70% of a cat’s life is spent snoozing.

Scientists have long focused on how animals sleep and if they dream. They’ve monitored the brains of rats that are awake and performing tasks such as running around mazes for food. Scientists discovered that the rat’s brain performs virtually those same patterns while asleep, an indication that rats do dream.

It wasn’t until the 1950s when researchers discovered and identified Rapid Eye Movement (REM) sleep in humans. It is during this phase of sleep, which can occur several times during one sleep cycle, that we experience our most vivid dreams. This happens because it is when the brain is the most active when sleeping.

In the 1960s, scientists confirmed that cat’s, too, have REM sleep. Cats show low voltage electroencephalogram (EEG) activity with eye movements and while in REM sleep, have atonia, a type of muscle immobility. Scientists believe this is so they don’t hurt themselves and can act out a dream's content.

A cat’s sleep cycle breaks down into four periods: loafing, evening zoomies, deep sleep and morning zoomies, according to Gary Richter, owner and medical director of Montclair Veterinary Hospital in California. Loafing is part of their many cat naps that last between 15 to 20 minutes. The zoomies, after a day of loafing, occur at dusk. During this portion of the day, cats are on the hunt. In deep sleep, cats experience REM sleep like humans. At dawn, the zoomies return until the cat’s activity wains back into another day of slumber.

The Benefits of Dreams

Scientists aren’t sure if cats dream as we do, or what they dream about, but they do know cats have the same physical properties of sleeping. If they do dream for the same reasons as humans, it’s to organize and arrange images from the day. Dreams allow humans to process information, form memories and understand new experiences.

Dreaming benefits humans and would benefit cats, as well. Dreams help humans reduce the emotional tone of memories. If there is stress or trauma in one’s waking life, one’s sleeping life dulls those events through the process of dreaming. Researchers also believe dreams can prepare humans for future events. By dreaming, one can practice going through difficult tasks and events without having to face it immediately. Upon waking, humans are better prepared to handle unforeseen events as they come.

For a cat, that might mean escaping a neighbor dog. It’s a traumatic experience, to be sure. After the jolt of fear, the cat might take a much-deserved nap, perhaps dreaming of an open can of tuna fish on the back patio.