Discovery Could Give Bees an Extra Shot at Life 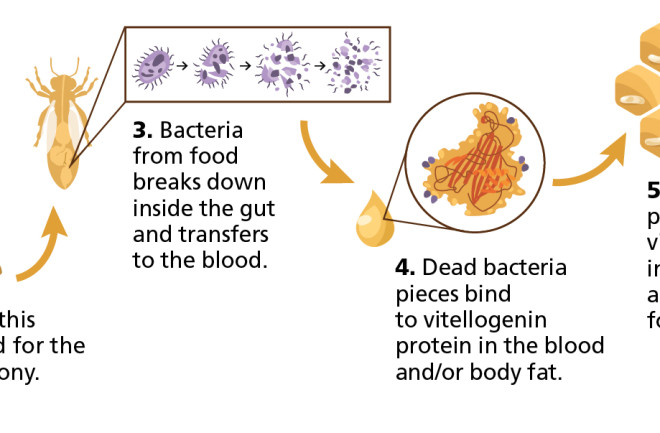 Sign up for our email newsletter for the latest science news
Experts now know how bees inherit their immunity, a key to crafting vaccines for bees. | Christofer Bang

The honeybee’s immune system has a few tricks up its sleeve — tricks that scientists could soon tap to protect stressed bee populations.

Insects don’t produce antibodies, the immune system’s way to remember and arm the body against recurring pathogens. Yet bees somehow pass along pathogen immunity to their young, something that shouldn’t be possible without antibodies.

The missing mechanism lies within vitellogenin, a protein that transfers fat into egg yolk, says Gro Amdam, a biologist at Arizona State University. In research published in July in PLOS Pathogens, Amdam and colleagues in Finland show that this seemingly simple protein can bind to “pathogen patterns.” These patterns are like molecular fingerprints for an invading microbe. Vitellogenin shares these patterns through the mother’s hemolymph (the bee version of blood) with the developing embryo, sending along a “most wanted” poster for diseases the mother has already encountered.

Using this knowledge, researchers are developing an edible vaccine against American foulbrood, a disease that decimates honeybee hives. This could pave the way to develop more vaccinations to give stressed colonies an extra shot at life.

[This article originally appeared in print as "Giving Bees a Shot."]