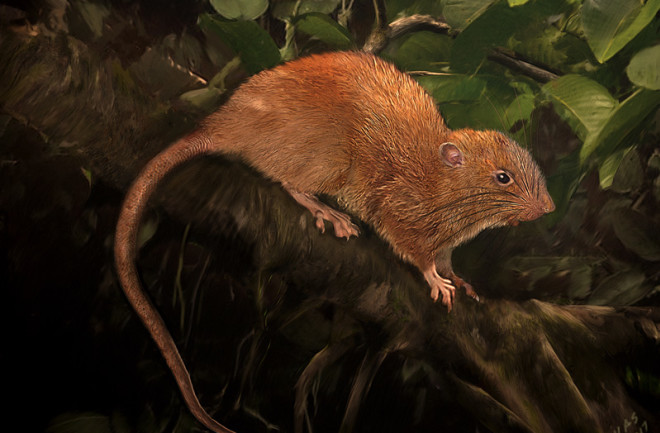 This is an illustration of the new species, Uromys vika. (Credit: Velizar Simeonovski, The Field Museum) The mysterious tale of the giant rat of Sumatra was famously "a story for which the world is not yet prepared," according to Sherlock Holmes. Now, after years of searching, researchers have discovered a new tree-dwelling, coconut-piercing species of giant rat in the Solomon Islands—and it measures 18-inches long. The isolated nature of the Solomon Islands, a nation that lies roughly a thousand miles northwest of Australia, have led animals there to evolve in unique ways. More than half of the mammals on the Solomon Islands are found nowhere else on Earth, which helped draw mammalogist Tyrone Lavery of the Field Museum in Chicago. "The Solomon Islands are such a spectacular place to work," Lavery said. "Each isolated island offers an opportunity to discover something new."

On his first trip to the Solomon Islands in 2010, Lavery heard rumors of a giant, possum-like rat that natives of Vangunu Island called the vika. "It had been a long time since anyone had been working on mammals in the country," says Lavery. "A lot of species were discovered there in the late 1800s or early 1900s, and many have not been seen since." However, after 10 trips, Lavery failed to track down the vika. All he could find with cameras and traps set up in trees were regular black rats spread across the globe by European colonists. "I was sure that vika existed, but I was very worried it may have been a species that was already extinct, and that the signs of vika people were telling me about — for example, chewed ngali nuts — were merely from the introduced rats," Lavery said. "After some exhausting attempts to find it, I was on the verge of giving up." Then, in 2015, when a logging company cut down a tree on Vangunu Island, a vika fell out and died shortly afterward. One of the company's employees, John Vendi, knew the scientists were looking for this rat and let them know they had one. Lacking salt or any other substance to help preserve the vika, it was initially simply buried in a hole lined with stones. By the time the researchers could examine the specimen, it had largely decomposed. Still, from the skull and partial skeleton, as well as DNA analysis of its hair, the scientists determined the vika was unique. The new species, named Uromys vika, is the first rat discovered in 80 years from the Solomons. The researchers suggested that its ancestors probably rafted to the islands atop floating vegetation. "There are eight known species of rodent from Solomon Islands; this is among the largest," says Lavery. "There is only one larger species in the country called Poncelet's giant rat, which probably weighs over 1 kilogram."

These are nuts bearing the characteristic tooth-marks of Uromys vika. (Credit: Courtesy of Tyrone Lavery, The Field Museum) Traditional stories of vika suggest they can eat coconuts. While Lavery has not seen one crack open a coconut, "I have evidence they can eat a very thick-shelled nut called a ngali nut. Based on this, it is likely they can chew through the shell of a coconut." The newfound rat will likely get designated as critically endangered because of its rarity and the threat posed by logging to its rainforest habitat. "The animal was found on the edge of the Zaira Conservation Area, an initiative led by a small village of only 250 people," Lavery said. "Recognition of this new species raises the value of their conservation area — they also have an endangered bat, and nesting endangered leatherback turtles." Preserving this giant rat is not just vital for ecological reasons, but also cultural ones — there are nursery rhymes about such creatures across the Solomon Islands, Lavery said. For instance, on Bougainville, two rats called Kamare and Isuku "feature in a children's rhyme that is a lot like our 'this little piggy went to market,'" he said. Other species of mammals likely remain to be discovered on the Solomon Islands, Papua New Guinea and Australia, "and I would like to continue to undertake this type of work," Lavery said. "The field work is extremely challenging, and in some cases it is a race against time to discover them before all habitat is lost." Lavery and his colleague Hikuna Judge detailed their findings Sept. 27 in the Journal of Mammalogy.