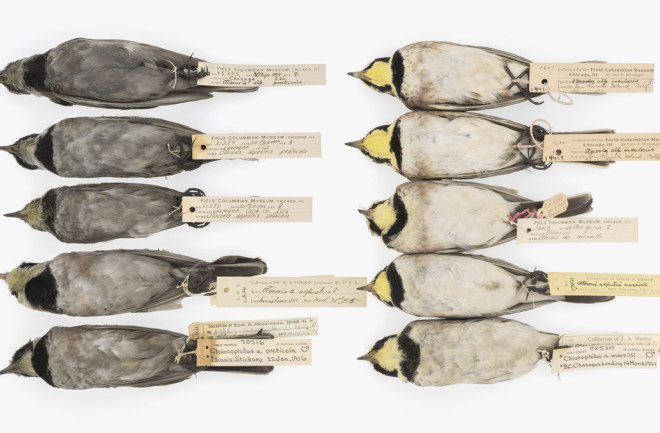 A comparison of Horned Larks collected inside and outside of industrial areas during the early twentieth century. The specimens on the left were collected in Illinois, inside the U.S. Manufacturing Belt. The specimens on the right were collected along the western coast of North America, away from industry. (Credit: Carl Fuldner and Shane DuBay) Enterprising researchers working at the Field Museum in Chicago dusted off a collection of Horned Larks to get a better look at the dirt trapped in their wings. That's because these birds, some more than a century in age, together form a unique, physical record of industrial-era air pollution. Using soot that billowed from smokestacks and onto feathers during the factory boom, two University of Chicago graduate students updated estimates of atmospheric soot levels in the early 20th century, something previously based largely on models.

As far back as the 1930s, scientists and collectors noted something odd — some birds appeared darker then they used to. The culprit was quickly determined to be tiny particles of soot from the soft, bituminous coal that was powering the growing Rust Belt factory boom, and science moved on. Shane DuBay is an evolutionary biologist and Carl Fuldner studies art history; they were brought together by a grant program that pairs the arts and sciences to promote innovative research. Based on a shared interest in the ways history collections reveal past environments, they stumbled across the museum's sooty birds and realized that they had hundreds of winged, atmospheric time capsules from the 19th and 20th centuries. "All living organisms don't exist within a vacuum, and any species, humans included, you might find in a natural history collection, if it was collected from an environment, that means it was interacting with that environment," Fuldner says. They found several species of birds from the Midwest that contained soot particles picked up during their final year or so of life, and which remained embedded in their plumage. The Field Museum contains hundreds of specimens of some bird species, collected as time-series collections. This creates an unbroken record of a species over a span of years — perfect for the kind of work DuBays and Fuldner wanted to do. Crucially, specimens at the museum are painstakingly labeled with dates and location information — sometimes down to the street corner, according to Fuldner "It gives us an incredible opportunity to basically map the distribution of atmospheric black carbon over space," DuBay says.

They photographed over a thousand birds of five different species, the main requirement being that they have light-colored breast and belly feathers. Ranking the birds according to reflectance — in other words, how dark they were — gave them a good proxy for levels of soot in the air. They noted peak levels in the early 20th century and a big dip during the Great Depression, when factory production slowed. As soon as WWII broke out, soot levels rose again with wartime industry, and then tapered off afterwards as legislators began demanding pollution reduction. Matching their results to known events gave them confidence that the model worked, and they took it a step further. Our previous estimates of atmospheric soot levels between 1880 and 1910 are too low, they say, in a paper published Monday in the Proceedings of the National Academy of Sciences. The birds show soot levels to be much higher than thought, important information given that we use historical records of air pollution to inform our current predictions about climate change. Those previous estimates were based on a model that combined coal consumption numbers with information about the relative efficiency of coal burning at a given time. These remain approximations, however. The birds' plumage is hard evidence. DuBays and Fuldner were also able to pinpoint locations where soot levels were the highest thanks to bird specimens collected nearby. Joliet, Illinois stood out immediately; looking back through historical records, they found that it was home to the second-largest steel-producing plant in the U.S. at the time. The find serves as further evidence that museum birds are part specimen, part atmospheric measuring device.

The technique is filling in gaps in our historical knowledge, but it could find use even today, in places like Beijing where air pollution continues to be an issue. Though the species may differ, the fact remains that animals there are inextricably linked to their environment and the changes it goes through. "Time and time again there are examples of the value of historical collections of specimens from the past that help us to address our present-day environmental challenges," Dubay says. Collections of bird eggs and raptor observations were crucial to unveiling the harmful effects of DDT in the 1960s, and bird feathers served as an early alarm for elevated levels of mercury in the Atlantic. Who knows what other trends might await discovery still, locked away in museum collections? "All of these specimens that exist in collections; at the time they were incorporated into the museum, no one could have ever known how we would have used them now to address this question," Fuldner says. "It’s hard to know how the specimens we collect now are going to be used in the future. Likewise, the meticulous ornithologists of the 19th century never anticipated this day. They simply trusted in the importance of their work.