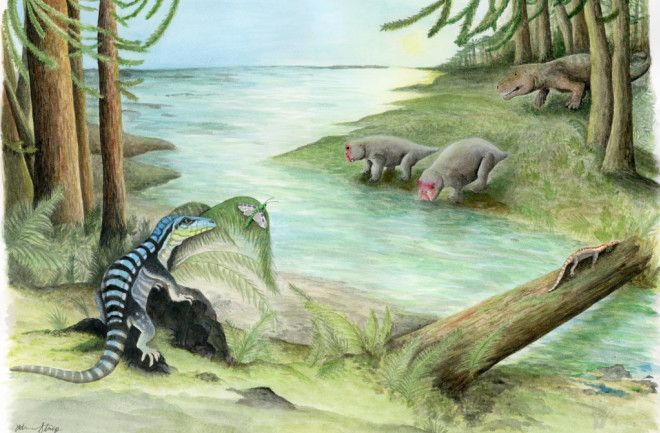 In the wake of the end-Permian mass extinction, the greatest die-off known, Antarctica was a land of rivers and lush conifer forests teeming with animals, as shown in this artist rendering of newly described Antarctanax shackletoni on the hunt (foreground). (Credit: Adrienne Stroup/Field Museum)

A dinosaur relative about the size of an iguana, which lived at the bottom of the world 250 million years ago, is throwing paleontologists for a loop. Antarctanax shackletoni, named for explorer Ernest Shackleton, hints at unexpected biodiversity on the now-frozen continent of Antarctica.

About 252 million years ago, the greatest mass extinction known walloped life on Earth. An estimated 90 percent of all living things perished. In the wake of this event, known as the end-Permian or Great Dying, surviving species diversified to occupy all those newly vacant ecological niches.

Early archosaurs were among the animals that fared well following the mass extinction: The group quickly expanded into crocodilians, pterosaurs and, most famously, dinosaurs. Paleontologists have been piecing together the story of how rapidly archosaurs evolved and spread across the planet — that’s where Antarctanax comes in.

Discovered during a dig in Antarctica’s interior, Antarctanax dates to the earliest days of the Triassic Period, which followed the Permian. Enough of the partial iguana-sized skeleton was preserved for paleontologists to confirm it was an early archosaur.

Antarctanax, like other early Triassic fossils found in Antarctica, is evidence of a continent far different than it is today. While Antarctic ecosystems of the Triassic still experienced midnight sun in summer and long, dark polar nights that lasted months, the climate was far more temperate, rarely dipping below freezing.

Standing on a ridge in early Triassic Antarctica, you would have seen rivers and thick forests teeming with life rather than the barren expanse of rock and ice that dominates the interior now.

At the time Antarctanax lived, the landmass of Antarctica was joined to what’s now South Africa, home of the Karoo Supergroup, well-studied rocks that span a roughly 100-million-year timeframe, including the Permian and the Triassic. The South African formation has been invaluable for helping science understand vertebrate evolution, including how it was nearly derailed by the end-Permian mass extinction.

The Karoo rocks are about the same age as the Beacon Supergroup of the Central Transantarctic Mountains, where Antarctanax was found. Working with layers of rock from the same time and region, paleontologists digging in Antarctica initially expected to find animals similar to those from the Karoo.

The early archosaur Prolacerta broomi, for example, is found in both locations (the largest known specimen, described in Scientific Reports in December, turned up at Graphite Peak, the same locality where Antarctanax was unearthed).

The researchers discovered, however, that the biodiversity of Antarctica’s Early Triassic is significantly different from that of the Karoo. Some species that were snuffed out in the Karoo after the end-Permian mass extinction lingered on in Antarctica while Antarctic species such as Antarctanax are unknown in the Karoo, despite it being one of the best-studied fossil sites in the world.

Finding Antarctanax is particularly significant not only for Antarctic paleontology but for understanding archosaur evolution in general. Together with Prolacerta and fragmentary remains of a large, as yet unidentifed animal, it’s the third Early Triassic archosaur found in the region. Finding so diverse a trio of archosaurs, so soon after the Great Dying, reveals how rapidly the group expanded — to the ends of the Earth, literally — in the wake of the mass extinction.

The research appears today in The Journal of Vertebrate Paleontology.

A paleontologist with The Field Museum and lead author of the Antarctanax paper, Brandon Peecook provides scale for the Antarctic expanse as seen from Coalsack Bluff, a fossil-rich site on the frozen continent. (Credit: Roger Smith)

A paleontologist with The Field Museum and lead author of the Antarctanax paper, Brandon Peecook provides scale for the Antarctic expanse as seen from Coalsack Bluff, a fossil-rich site on the frozen continent. (Credit: Roger Smith)