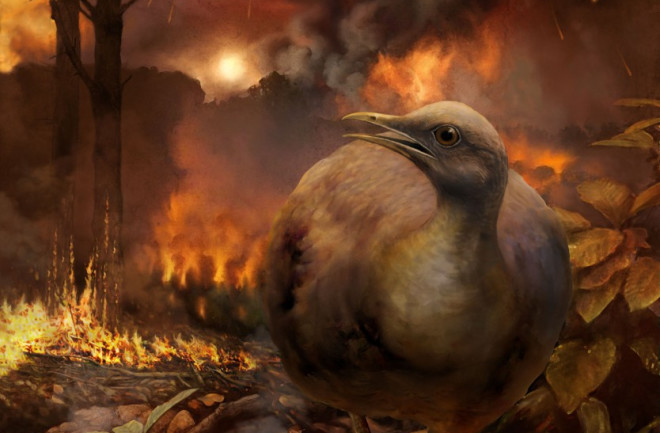 The asteroid impact that eliminated non-avian dinosaurs destroyed global forests. Here, a hypothetical surviving bird lineage flees a burning forest in the aftermath of the asteroid strike (Credit: Phillip M. Krzeminski) It's the most common caveat you'll hear about the End-Cretaceous mass extinction: It wiped out the dinosaurs, except for birds which are, you know, dinosaurs. A new study suggests that the global die-off nearly took birds out as well. About 66 million years ago, a mass extinction offed a huge percentage of life on Earth — about three-quarters of all species that had been going about their business. Researchers still debate whether an asteroid or massive volcanic activity was the main catalyst for the extinction event, but it's fair to say both the space rock and the wide swaths of magma-vomiting fissures played a significant role. The most famous victims of the end-Cretaceous were the non-avian dinosaurs, including tyrannosaurs, of course. But the mass extinction also nailed the coffin shut on other supercool animals, including the fabulous flying pterosaurs and the big and bitey marine reptiles known as mosasaurs. But you know what they say: When one door closes, another one opens. In the aftermath of the end-Cretaceous, at the start of the Paleogene Period that followed it, the fossil record tells a story of recovery and even a boom in biodiversity as surviving species radiated to fill newly vacated ecological niches. Mammals in particular enjoyed a boost, as did birds, the lone surviving branch of Dinosauria. Researchers looked a little closer at the bird boom, however, and uncovered a curious conundrum in the fossil record: During the Cretaceous, most of the birds alive, as well as their nearest dinosaur relatives, had a suite of anatomical traits that suggested they were adapted to living an arboreal lifestyle. In the early part of the Paleogene, however, birds were ground-dwellers, including the distant ancestor of today's chicken. Up A Tree To figure out just what the heck was going on with birds during the end-Cretaceous, a team looked at evidence from multiple sources, including fossilized plants and pollen as well as the anatomical traits of modern birds occupying different ecological niches. Their conclusions: At the end-Cretaceous, a series of catastrophic events destroyed the planet's forests, including global wildfires, acid rain and sunlight-blocking ash filling the skies. Full disclosure: The paper mentions only the asteroid that slammed into Earth near what is now the Yucatan Peninsula and does not acknowledge volcanic activity known to have occurred before, during and after the impact, but hey, that's cool, whatevs. Like I said, there is still a debate over the primary cause of the mass extinction, and people in the different camps get mighty testy about it. Regardless of what caused the global forest collapse, the key point is: No trees, no tree-dwelling animals, including most birds. In the immediate aftermath of the end-Cretaceous, a spike in fern populations that lasted about a thousand years is further evidence that the forests were decimated. Sometimes called "disaster flora," the plants are known to be rapid recolonizers of landscapes devastated by fire and lava flows. Following the fern spike, proper forests, with tree canopies, slowly returned, but for about 1.4 million years were marked by low diversity. Eventually, well, you know, "life finds a way" and all that. The forests recovered and regained their rich biodiversity. Meanwhile, the handful of birds that made it through the dark days of the End-Cretaceous, all of them non-arboreal, continued to evolve and began to branch off, no pun intended, to exploit new ecological opportunities, including living in the trees. That means the 11,000 or so species of birds around today — from hummingbirds to herons, pigeons to penguins — can all trace their ancestry back to those Cretaceous ground-dwellers. Today's study appears in Current Biology.

The handful of birds that survived the end-Cretaceous eventually diverged into penguins, chickens and thousands more winged and wonderful critters. And if you think I'm mentioning penguins just to have a reason to share one of my favorite penguin moments, you're correct. (Credit G. Tarlach)