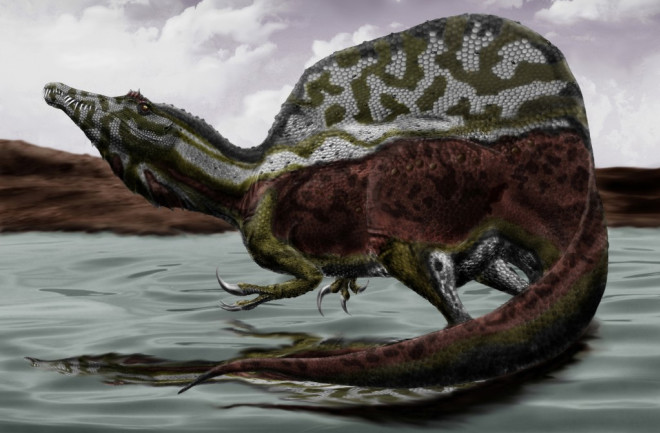 Artist rendering of Spinosaurus aegyptiacus, one of the apex predators that prowled the massive river deltas of North Africa 100 million years ago. (Credit Wikimedia Commons/Durbed) You are what you eat. And if you're one of the apex predators that populated an unusual ecosystem 100 million years ago, researchers can determine both your meal plan and how your local food chain got so top heavy with giant carnivores, including dinosaurs and crocs. Paleontologists have long puzzled over why the ancient river systems of North Africa were home to multiple apex predators. A new study provides a meaty answer, though there's something fishy about its data on Spinosaurus, one of the more controversial dinosaurs. Looking at an animal's teeth to determine its diet is nothing new, but researchers recently drilled down — literally — to obtain additional information stored inside the chompers of several apex predators that once munched their way through the middle of the Cretaceous, about 100 million years ago. It was an interesting time, particularly in North Africa, where a number of massive river deltas flowed northward.

Massive river systems full of apex predators dominated what's now North Africa back in the middle of the Cretaceous, about 100 million years ago (yes, this shows 94 million years ago, but you get the idea...this is geologic time we're talking about, so what's a few million years between friends?). (Credit C. R. Scotese, PALEOMAP Project, www.scotese.com) Recent fossil finds from across the region, including Morocco, Egypt and Niger, have revealed that the long-gone rivers once supported a peculiar food chain that seems top-heavy with apex predators. At several locations, it appears that massive meat-eating dinosaurs such as Carcharodontus saharicus and Spinosaurus aegyptiacus lived virtually side-by-side not only with each other but also with equally bitey and oversized crocodylomorphs, distant ancient kin to today's crocodilians. The food chain isn't supposed to work that way: it's more of a pyramid than a chain, with a single, aptly-named apex predator sitting pretty on top. It's all about having the resources to support energy needs: A single predator typically needs to eat a lot of prey to survive. Paleontologists have long wondered why these mighty Cretaceous river systems in North Africa seemed able to support multiple apex predators. One of the leading ideas to emerge was that these animals occupied different ecological niches: Carcharodontus and similar theropod dinosaurs noshed on land animals, crocodylomorphs such as Sarcosuchus imperator had mixed diets similar to modern crocodiles and the spinosaurids, Spinosaurus chief among them, well, they... Let's back up. The backstory of Spinosaurus is an interesting one of discovery, loss and rediscovery, but in brief: when rediscovered a few years back, Spinosaurus was billed as the first semi-aquatic dinosaur, which caused quite a stir in the field. Critics were aghast: Dinosaurs were land animals, dang it, and didn't like to get their toes wet, never mind go full-on Michael Phelps. Pro-aquasaurus types argued, however, that not only was Spinosaurus and its closest kin built for water, but that being a fish-eater made sense in the broader context of the river system ecology. It's more likely that a single ecosystem could support multiple apex predators if those predators ate different prey. It sounds simple, but how to test it? Well, a team of researchers got their hands on more than 70 teeth from a range of animals that lived in and around these mid-Cretaceous river systems. In addition to teeth from multiple apex predators, they also obtained specimens from a variety of plant-eating dinosaurs, fish and other animals. The team then analyzed the calcium isotopes preserved in certain layers of the animals' teeth. A number of previous studies have used this type of analysis to determine diet from both living and ancient populations of animals. Basically, what you eat — meat, fish or plant — leaves a distinct calcium isotope signature in your teeth that can be preserved, even deep into the fossil record.

Carcharodontosaurus on the prowl for meat, the top terrestrial apex predator of its day. (Credit Nobu Tamura) Added bonus: because the particular layers of teeth studied are less porous than bone, they are less likely to be contaminated during the fossilization process, which means there is less chance of a lot of distracting "noise" in the isotopic analysis results. And those results, according to the new study, show that for all of the locations studied, the apex predators engaged in "resource partitioning." That's a fancy way of saying the carcharodontids and other non-spinosaurid carnivorous dinosaurs ate land animals, most commonly herbivorous dinosaurs. Spinosaurids, long argued to be at least semi-aquatic if not entirely so, ate, you guessed it: fish. Some of the individual spinosaurids that were tested apparently ate nothing but fish food. And, like their modern kin, the crocs appeared to have an intermediate diet of both fish and terrestrial vertebrates. The results are one more piece of evidence in a puzzle paleontologists are still assembling, but they do nudge the debate ever more in favor of the spinosaurids being aquatic dinosaurs, unique in the fossil record. And they show just how long evidence of diet sticks in your teeth. What will your fossil say about you 100 million years from now? Today's study was published in the Proceedings of the Royal Society B: Biological Sciences.