Did the First Americans Arrive Via A Kelp Highway? 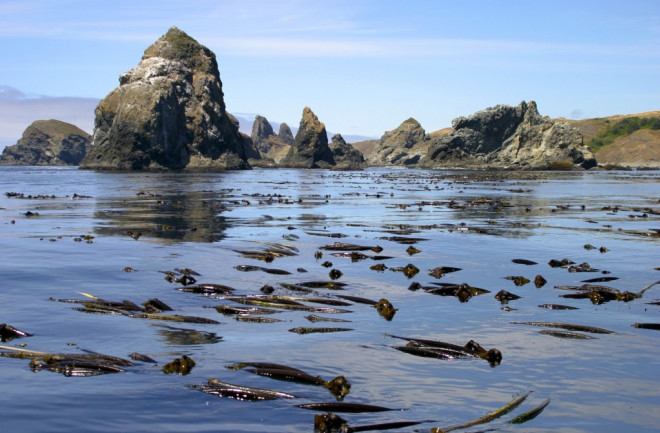 The First Americans may have followed a "kelp highway" of marine resources via a coastal route from Siberia to the New World. Nutrient-rich kelp beds such as these, near Crook Point on the Oregon coast, attract salmon and other sea life that would have sustained the early explorers. (Credit Roy W. Lowe/U.S. Fish & Wildlife Service) The average person's idea of how — and when — the first people arrived in the Americas needs a serious revision, say researchers: The First Americans arrived significantly earlier and via a different route than most of us learned in school. There's something fishy about the whole thing. Open most middle school textbooks to the chapter on how our species migrated to the Americas and you'll likely see an image of people in furs trekking over taiga and tundra, the lost world of Beringia. The land bridge, now submerged, once linked Siberia to North America. For years the standard story was that hunter-gatherers from Siberia crossed it on foot when the glaciers retreated enough, at the end of the last ice age, to open an ice-free corridor. And people did cover Beringia on foot when such a route opened up. But they probably weren't First Americans. Think of them as... Second Americans, perhaps. Thanks to a growing body of archaeological and genetic evidence, researchers publishing today in Science say it's increasingly likely that the first humans to arrive in the Americas followed a coastal route, making the most of marine resources on a "kelp highway" that spanned the edge of the north Pacific from Asia to North America. And they made this journey well before glaciers retreated to open the traditional Beringia overland route. Surf or Turf? To be clear, the kelp highway hypothesis is not new. It's a 21st century tweak of a coastal migration theory that was around — and discounted — for much of the preceding century, when many in the field were all in on the Beringia overland idea. In 2007, archaeologist Jon Erlandson and colleagues, including marine ecologists, fleshed out the earlier idea of coastal migration by reconstructing the environment these early travelers would have encountered. About 16,000 years ago, someone traveling along the northern Pacific Ocean coastline eastward from Siberia would have encountered an essentially unobstructed route at sea level, with plenty of fish, shellfish, kelp, seabirds and other resources — and no dangerous open ocean. The specificity of the hypothesis, together with subsequent archaeological discoveries that defy the Beringia timeline, led more and more researchers to rethink whether they wanted to stay in the overland migration camp. What's new about the kelp highway hypothesis, according to authors of today's commentary, is that we've passed a tipping point, and that most of the field now believes the First Americans followed this Pacific Rim buffet all the way from Siberia to the North American coastline and beyond. As these earliest of Americans moved south into Central America, the marine ecosystem would have changed — no more kelp forests, but mangrove habitats instead, which offered different sustaining fare that the adaptable humans made use of. At the same time that the kelp highway hypothesis appears ever more plausible, the old Beringia overland idea is facing more challenges. For example, a 2016 study of pollen, fossils and DNA from cores of lake sediment reconstructed the environment of that early ice-free corridor into North America. The authors concluded the route would have been inhospitable to humans until much later, perhaps 12,600 years ago — well after archaeological evidence shows humans had moved deep into the Americas. There's solid archaeological evidence at the Monte Verde site in Chile of a human presence on the South American coast at least by 14,500 years ago — and potentially as early as 18,000 years ago. And in Florida last year, researchers turned up evidence of a mastodon butchering site that's about 14,550 years old. Let's Not Get Too Crazy Now Just because it's time to bury the overland Beringia hypothesis for First Americans once and for all, it doesn't mean anything goes, according to the authors of today's commentary. In particular, they take aim at a controversial study published in April that suggested stones found near mastodon bones dated to about 130,000 years ago were evidence of humans at the site in southern California. That study's conclusions are an example of "implausible claims based on limited and equivocal evidence" according to today's authors, who add that there's no evidence humans were even in far northeastern Siberia any earlier than around 50,000 years ago. (And yes, as genomic evidence has shown, all signs point to the First Americans' ancestors coming from Siberia. Claims of a westward migration from Europe before the end of the Ice Age, also known as the Solutrean hypothesis, haven't been supported by DNA studies, though that doesn't stop some folks from continuing to promote the scientifically shaky idea.) Under The Sea Despite exciting finds in the last year or two, notably on Canada's Triquet Island, sites with evidence of an early human presence that would bolster the kelp highway hypothesis remain few and far between. And blame the ocean itself for that. Due to erosion and post-glacial sea rise, coastlines around much of the world have changed significantly, often by ten miles or more, in recent millennia. That said, it's likely there are more remnants of rest stops on the kelp highway somewhere out there, waiting to be found. The researchers behind today's perspective call for a greater focus on fieldwork in coastal areas where the geography has meant little change with sea level rise — and for more work underwater, in hopes of rediscovering what the sea swallowed centuries ago.