Did Native Americans Breed Parrots in New Mexico 1,000 Years Ago? 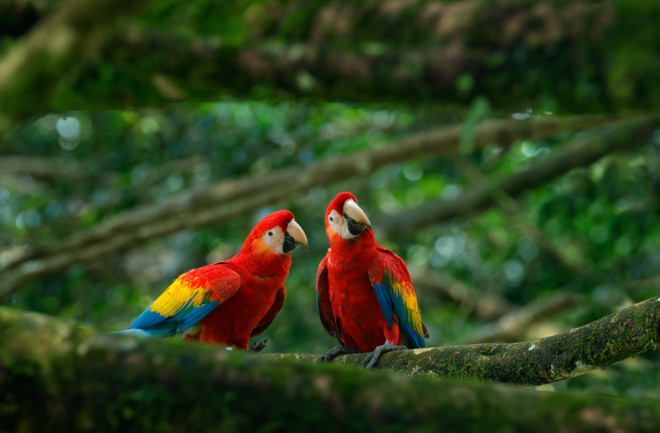 (Credit: Ondrej Prosicky/shutterstock) Native Americans may have kept a breeding colony of scarlet macaws in the American Southwest starting more than 1,000 years ago, a new study finds. The birds were raised for their colorful plumage hundreds of miles from their native jungles. With their brilliant red, yellow and blue plumes, scarlet macaws are likely the best-known parrots of the New World. These birds normally range from South America to eastern coastal Mexico and Guatemala. Yet, over the years, archaeologists have unearthed hundreds of scarlet macaws skeletons in the American Southwest. These birds appear in the archaeological record of the area between 900 and 1200 AD, just as more complex societies were emerging in the region. These ancient civilizations include the Puebloan people at Chaco Canyon in present day New Mexico.

Scarlet macaws figured prominently in ancient cultures throughout the American Southwest. "Even now, ceremonial regalia in a lot of cases have macaw feathers in them," says study co-author Stephan Plog, an archaeologist at the University of Virginia at Charlottesville. "If you go to see a Pueblo dance, there's a good chance you'll see macaw feathers on at least some of the dancers. Macaws can also mimic human speech, and so are often viewed as a bit more human-like, which could have enhanced their significance." In the past, archaeologists had suggested that ancient Puebloans went on long-distance treks to the bird's natural breeding grounds and brought them back. Such expeditions likely would have proven challenging. Instead, Plog and his colleagues explored the possibility these scarlet macaws came from breeding centers. Prior work had found signs of breeding scarlet macaws in pens at the northern Mexican site of Paquimé. However, this breeding colony dated from 1250 to 1450, well after the abandonment of Chaco Canyon. To learn more about the origins of the scarlet macaws of the American Southwest, the researchers analyzed DNA collected from 14 of the birds found at Chaco Canyon and the contemporaneous Mimbres region in New Mexico. The specimens are kept at the Smithsonian's National Museum of Natural History. The scientists discovered that all of these birds had low genetic diversity. Each specimen came from just one of the five major haplogroups, or genetic lines, of the scarlet macaws in Mexico and Central America. The specific haplogroup these parrots belonged to is rare among modern scarlet macaws. The genetic uniformity of these scarlet macaws suggest the 14 specimens from across three centuries all came from an isolated group with a small number of common ancestors. That's an unlikely scenario for wild birds, which fly far and wide to breed. All in all, these findings support the idea these scarlet macaws "came from a breeding center, perhaps more than one," Plog says. So far, no one has discovered where the breeding site for these parrots might be. Future analysis of other ancient macaw specimens from the American Southwest, such as ones kept at the American Museum of Natural History in New York, may help pinpoint the location of this breeding colony, according to the researchers. The scientists detailed their findings online August 13 in the Proceedings of the National Academy of Sciences.