Even Tyrannosaurus rexes needed to nap sometimes. A still-growing fossil record is showing how dinosaurs used to doze. 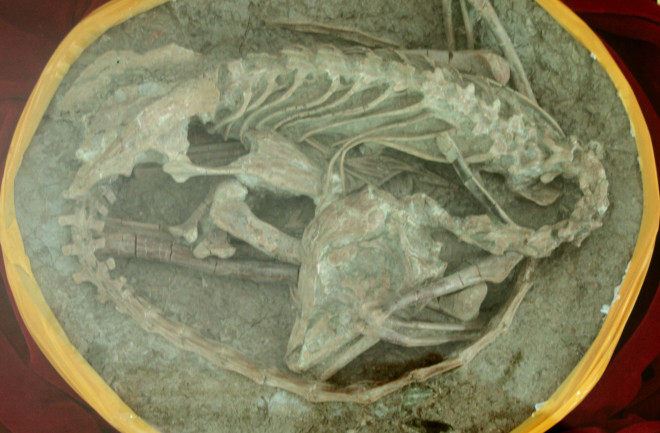 From museum halls to movie screens, we love to see dinosaurs at their fiercest. All those teeth, claws, spikes, horns, and other weird adornments have provided plenty of inspiration for dramatic — and often brutal — Mesozoic scenes through the years. But dinosaur lives were not simply “red in tooth and claw.” These once-real animals had plenty of other concerns in their daily lives — like resting, dozing, and sleeping.

Before getting into how dinosaurs said goodnight, however, it’s worth asking when dinosaurs napped. Animals today tend to be mostly active either during the day, at night, or at dawn and dusk. And in 2011, paleontologists Lars Schmitz and Ryosuke Motani suggested that various non-avian dinosaurs were active at different times of the day, too.

Schmitz and Motani investigated delicate eye bones of various dinosaurs to see how those structures, called scleral rings, related to when the reptiles might have been active. The bones not only outline how large the eyes were, but how much light they let in. Following this logic, then, the researchers found that large, plant-eating dinosaurs like the duckbilled Corythosaurus were likely stomping around during morning and evening, while predators such as the infamous Velociraptor stalked the night.

But dinosaurs eventually wound down from their daily business, no matter whether they were active at night or during the day. A growing collection of fossils is revealing how they did so.

When a drowsy raptor, for example, set about going to sleep, the dinosaur probably took a familiar pose. Rare skeletons and trace fossils — or impressions made by once-alive dinosaurs — indicate that at least some dinosaurs shuffled their feet beneath them, folded their arms, and rested their heads on their backs just like some slumbering birds today. Almost a century ago, paleontologist Charles Lewis Camp described the bones of a small, meat-eating dinosaur called Segisaurus found with its arms and legs tucked beneath it.

Multiple other finds have popped up since then. In the Jurassic rock of southern Utah there’s a body impression of a large, Dilophosaurus-like dinosaur that sat down to rest, shuffled forward, and settled in. From the way the dinosaur sat to how it held its hands, this carnivore acted in a very bird-like way despite living over 40 million years before the first birds evolved. Better yet, paleontologists have also described the fossil of a small, raptor-like dinosaur named Mei long that was asleep — curled up and snugly — as ash buried the unfortunate animal. Its name translates to "sleeping dragon."

To date, most resting dinosaur finds have been of strange, parrot-like dinosaurs called oviraptorosaurs. “We have way more resting oviraptorids than any other group of dinosaurs,” says University of Edinburgh paleontologist Greg Funston, noting that there are more than half a dozen published specimens. Just last year, Funston and colleagues published another example — youngsters of a new oviraptorosaur named Oksoko that were found in the classic resting pose.

So far, most of the finds are associated with one particular branch of the dinosaur family tree — the theropods, to which birds also belong. A rare counterexample is a plant-eating dinosaur named Changmiania that was named in 2020 from a pair of skeletons found in curled-up resting poses, representing dinosaurs that had been buried in a den collapse. But when it comes to favorite giants like Triceratops, Stegosaurus, Apatosaurus and others, those dinosaurs may have been too big to leave clues. “There is probably a limit to how big an animal can get before it can’t get buried alive,” Funston says. So it’s unlikely that paleontologists are going to find a Brachiosaurus that perished while dozing off.

The local environment has a role to play, too. “In areas like the Gobi desert of Mongolia, which is an oviraptorid hot spot, some of the rocks are from desert environments where animals are more easily buried alive,” Funston says. Great sand dunes near where the dinosaurs nested could suddenly collapse and bury them at rest, a special circumstance not found in many other places.

Trace fossils could be helpful here. Dinosaurs left their tracks and impressions as well as bones. The trick would be recognizing them. “If some dinosaurs did lie down in fully horizontal positions, the traces of those behaviors might be so big and messy that we would have a tough time recognizing them as trace fossils,” Emory University paleontologist Anthony Martin says. Thinking on dinosaur scale isn’t always easy.

Nevertheless, paleontologists are still picking away at the quieter side of dinosaur lives. Just this month, paleontologists proposed that they’d found traces made by a resting Tyrannosaurus that pushed itself up off the ground with its forearms. Martin is skeptical of the identification, noting that the traces may be unrelated impressions, but he still is glad other researchers are thinking of dinosaurs doing things other than biting each other. “Dinosaurs weren’t always in constant motion, chasing or being chased,” says Martin. “Sometimes they needed to stop, look, and listen. Or just chill.”