Thanks to federal law and big developments, central Florida has some impressively preserved natural spots. 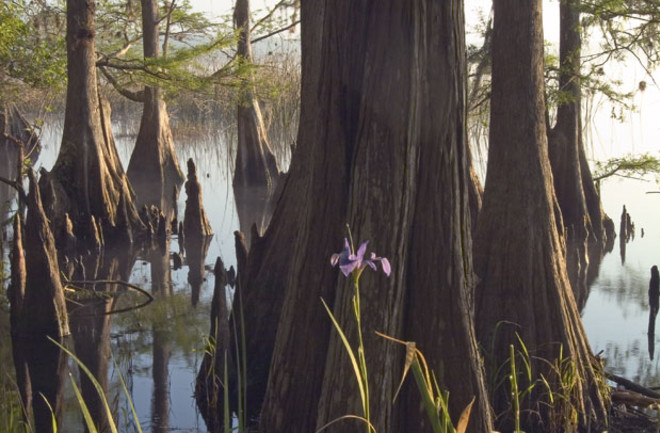 Unpaved Orlando Where: Central Florida What: Pristine wilderness in the shadow of America’s theme park capital

Orlando is famous as the family-fun city that Disney built, but it has quietly developed a secret second identity as a jumping-off spot to some of the most pristine wilderness in Florida. Sadly, the bulk of the 50 million-plus visitors who converge on this tourist megalopolis every year, spending hours creeping along congested highways from hotels to theme parks, probably never realize that the other, wilder Florida lurks just an exit away. When I passed through recently with my daughters en route to a family reunion, we were able to explore this hidden Orlando, where tropical ecology is the prime attraction. It was a relaxing antidote to the hyperstimulating theme park experience: no crowds, no merchandise booths, no imitation castles, and the only mouse ears in sight belong to Podomys floridanus, the Florida mouse.

Orlando’s transformation into a mecca for family vacationers began in the early 1960s, when agents working for the Walt Disney Corporation bought up more than 40 square miles of cattle fields and swamps here. For Walt Disney World (now the Magic Kingdom®), which opened in 1971, the company built dozens of canals and levees and drained an entire lake. But Orlando’s fate changed again in 1972, when Congress passed the Clean Water Act, recognizing that wetlands filter the water that flows through them and provide important habitats for fish and birds. Under the law, when builders drain or pave over wetlands they must restore others nearby, a process known as mitigation.

One result is the Disney Wilderness Preserve, located some 30 miles south of Orlando. In the early 1990s Disney needed to offset new construction at its theme parks and at the planned community of Celebration. The company crafted what was, at the time, an innovative response, says Tricia Martin, the Nature Conservancy’s Central Florida conservation director: “Instead of doing piecemeal mitigation, which tended to produce tiny parcels within a development, they decided to do a larger project off-site.” In the end, Disney decided to buy an entire 8,500-acre tract called Walker Ranch and then donated it to the nonprofit Nature Conservancy. (For information on the preserve: call 407-935-0002, email visitdwp@tnc.org, or see the webpage for the preserve.)

Other developers have since adopted this approach as well, for several reasons. First and foremost, wetlands are more complicated than they look. Marshes, swamps, and bogs are all unique ecosystems with their own water flow patterns, and it takes more to create a healthy, lasting wetland than digging a hole and adding water. Many companies are willing to hire experts to do it, and environmental groups like the Nature Conservancy are ready to help conserve sites that would otherwise become parking lots.

The Disney Wilderness Preserve is a case in point. It sits in the Everglades headwaters, a zone of streams, lakes, and ranch lands stretching between Orlando and Lake Okeechobee in central Florida. Water once flowed freely from the lake to the Gulf of Mexico 100 miles south, creating the Everglades, the extraordinary 50-mile-wide swath of marshes that author and environmentalist Marjory Stoneman Douglas memorably called a “river of grass.” Drainage for ranching and development have shrunk the Everglades to half their original size, but state and federal agencies had adopted a 30-year plan that is projected to cost more than $10 billion. Conserving land in the headwaters area is critical because it helps protect the system at its source.

Driving along narrow side roads to the preserve, subdivisions quickly give way to scattered houses and cattle fields, without any billboards hawking the gator farms and swim-with-dolphin packages that pass as nature tourism in many parts of the state. At the refuge we follow a sandy walking trail that takes us back to a prehistoric Florida. Fields of leathery saw palmettos and stands of longleaf pine trees are pocked with ponds and marshes. Sandhill cranes swoop overhead, and a red-shouldered hawk screeches in the distance. There are more than 1,000 species of plants and animals at the refuge. Some are common, like wild turkeys, but many are endangered or threatened. The Conservancy is reintroducing endangered red-cockaded woodpeckers to the preserve and monitoring a rare wood stork rookery on the site.

To re-wild this tract, the Conservancy filled in drainage ditches, restoring natural water flows. It also attempted to weed out invasive species like feral hogs, a major Florida scourge introduced by Spanish explorers in the 1500s (the animals uproot delicate plants), and saltbush, a shrub that grows well in marshy areas but can spread aggressively. Now curators carry out managed burns across parts of the site each year to clear undergrowth and help native plants germinate. “Burns would happen even if we didn’t set them. This is the lightning capital of Florida, and these plants are wired for fire,” says program assistant Christa Evans. When we pass a burned-over section we see young longleaf pines sending bright green shoots up from their blackened stems, leafing out above the fire line.

The Disney preserve borders 750-acre Lake Russell, one of the last undeveloped lakes in central Florida. At its shore all we can hear is wind rustling through cypress trees that grow straight out of the water. Stained by tannic acid from their fallen leaves, the lake looks like strong iced tea. (It’s said that when Walt Disney saw this phenomenon in another lake on his Orlando land, he had it excavated and lined with sand to make the water look blue.) In a two-hour ramble along the preserve’s loop trail we see far more birds than humans, including a pair of sandhill cranes high-stepping into the underbrush with three half-grown chicks scurrying behind them.

Seeking bigger fauna, we then drive an hour east to Merritt Island, a 35-mile spit of land off Cocoa Beach (321-861-0667 or online here). When the Kennedy Space Center was developed on the island in the early 1960s, NASA bought out local landowners and turned the property into a 140,000-acre national wildlife refuge—another instance of big development paradoxically resulting in large-scale conservation. From April through October it is a prime spot to see manatees lolling in its protected waters.

We choose a kayak tour for a water-level view. The trip launches from a small beach at the inland end of the Haulover Canal, a waterway that bisects the island, connecting the coastal Indian River to the ocean. As we push off, a pair of dolphins troll lazily back and forth no more than 20 feet away, lunching on baitfish discarded by fishermen along the canal banks. The canal is a manatee-free zone, but as we veer into Mosquito Lagoon, where blue herons stalk fish in the shallows and black-headed gulls shriek overhead, I wonder if we will spot one of the elusive sea cows. Just then the water next to my boat erupts in a huge splash, drenching me. For a panicky second I worry that an alligator has snatched my eight-year-old out of the kayak. But Nina is still aboard, and our guide, Andrew Risavy, is grinning.

“We call that a manatee car wash,” he says. Our boat had glided over a dozing submerged manatee, panicking the huge creature (they can grow to 10 feet long and 1,000 pounds) into a lunge for deeper water. Returning up the channel, we pass a half-dozen more manatees floating near the banks and grazing on seagrass. Manatees have no natural enemies and can live up to 60 years, but they are classified as endangered. Because manatees are slow-moving and feed near shore, they are often hit by power boats. As we paddle along, we observe some with propeller scars on their paddle-shaped tails. The Florida population was estimated at around 5,000 last year, a record high.

In the name of thorough research, we spend a day at Disney’s Animal Kingdom®, one of the company’s four Orlando theme parks. The biggest draw here is the more than 1,700 animals on display. Riding in an open safari vehicle across a 100-acre savannah, we get semi-close encounters with black rhinos, elephants, and giraffes that have plenty of room to roam (although we could do without the cheesy narration about heading off imaginary poachers). Signs along the Pangani Forest Exploration Trail offer lots of did-you-knows about gorillas, meerkats, and other creatures on view. But reading them means constantly jostling to see over other visitors’ heads.

After a couple of hours, when I ask Nina how she likes the park, she sighs and says, “It’s okay. But it’s just so humanized.” Then she brightens: “Can we go kayaking again tomorrow?”

A Day Away Kayak Tours (321-268-2655) offers tours of Merritt Island year-round, including night trips to see bioluminescent marine organisms that light up the waters (plankton in summer, comb jellyfish in winter). South of Orlando, Lake Tohopekaliga, known locally as Lake Toho, is famous for bass fishing but is also a good place to see bald eagles and the endangered snail kite, a small hawk that feeds on snails in tropical marshes (800-247-1309). In Orlando the Harry P. Leu Gardens (407-246-2620) is a 50-acre estate donated to the city by a local businessman and avid horticulturist. It showcases plants that thrive in central Florida’s intense heat and humidity, including palms, bamboo, and a huge camellia collection. The gardens’ citrus grove has more than 50 varieties of oranges, grapefruit, and exotics like striped pink eureka lemons, whose rosy flesh yields true pink lemonade.

Jennifer Weeks is a Boston-based journalist specializing in nature, energy, and environmental issues.