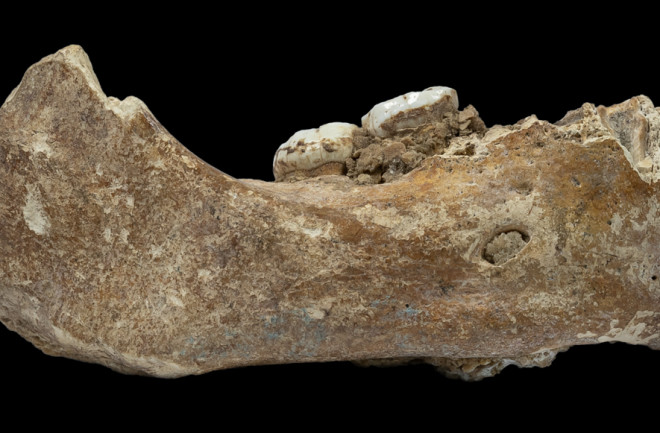 The right half of a Denisovan jawbone was found in 1980 in Baishiya Karst Cave but only recently identified. (Credit: Dongju Zhang/Lanzhou University)

On the mountainous Tibetan Plateau, small groups of nomadic herders still make a living two miles or more above sea level. Most of us would be poorly-equipped to deal with that altitude for long periods of time, but the Tibetans there have unique genetic adaptations that let their bodies function in the thin air.

Mysteriously, those genes seem to come from another species of human, the Denisovans, a little-understood group of hominins who died out tens of thousands of years ago. Until now, Denisovan remains had only been found in a single cave, at low altitude. That left the extinct species' high-altitude genes, like much else about their people, a puzzle. But the discovery of new Denisovan remains in Tibet might begin to change that.

Back in 1980, a monk praying in a cave found a mysterious human mandible, or jawbone, of which only the right half survives. Now scientists have re-examined that bone and say it came from a Denisovan. Their study appears Wednesday in the journal Nature.

And it shows that this particular Denisovan died in the area some 160,000 years ago, according to uranium-thorium dating of a carbonate deposit that grew around the jawbone after it was buried. The Denisovans, a sister lineage to Homo sapiens, were only discovered to be a new lineage of humans in 2010, and their genome was first sequenced not long afterward. However, the physical evidence for their existence is based on just a few bones, and accompanying DNA sequences, that were found at a place called Denisova Cave in Siberia.

But scientists have also found signs of their species by deciphering clues in modern human DNA, which suggests that the hominins ranged from Asia to Papua New Guinea and interbred often with our own ancestors. It suggests that the ancient humans were quite widespread, so it's puzzling that we've never found their bones anywhere but Siberia. And the mandible's location also establishes another milestone for the Denisovans. Because it was found on the Tibetan Plateau, the "roof of the world," it's a strong indication that ancient humans adapted to extreme elevations long before our modern ancestors. Previous estimates of the history of the Tibetan Plateau said that the region was first populated by humans around 40,000 years ago. The Denisovan mandible pushes that timeline back four-fold.

The Jiangla River Valley where Baishiya Karst Cave is located. Denisovans would have called this region home 160,000 years ago. (Credit: Dongju Zhang/Lanzhou University)

Proteins From the Past

Researchers couldn't extract DNA from the bone, a difficult task in a find so old, but they did analyze proteins found in dentin, the tissue that makes up much of our teeth. The technique relies on identifying the patterns of amino acids that make up individual proteins.

"Just like DNA, the amino acids in these proteins are ordered in a particular way," said co-author Frido Welker, a researcher at the Max Planck Institute for Evolutionary Anthropology. "And we can actually sequence these proteins, so we can read the order of those amino acids."

Comparing those proteins to ones from other groups of ancient humans let the researchers identify the jawbone as belonging to a Denisovan. Further analysis of the shape of the bone and the teeth backed up the categorization.

This virtual reconstruction shows what the jaw would look like with the mineral deposits removed. (Credit: Jean-Jacques Hublin/MPI-EVA, Leipzig)

Confirming the bone as Denisovan solves a riddle that's been echoing through the scientific literature. Scientists know that Tibetans and others in the region have a gene inherited from Denisovans that helps them live at high altitudes, the result of mating between our lineages long ago.

The gene, known as EPAS1, alters their bodies' production of hemoglobin, a protein in red blood cells that carries oxygen. But it's puzzling that Denisovans ever had the gene in the first place, as their remains had only been found at one site at relatively low altitude. The Baishiya Cave mandible provides that missing link. Combined with the genetic evidence for high-altitude adaptations, the researchers say that Denisovans learned to deal with rarified mountain air long before modern humans did — and passed that ability on to us.

"Frankly speaking, until today, nobody ever imagined that archaic humans could be able to dwell in such an environment," said Jean-Jacques Hublin, a co-author and paleoanthropologist at the Max Planck Institute for Evolutionary Anthropology. "It’s a big surprise because most people thought that challenging environments like the high altitudes were colonized only by modern humans like us less than 40,000 years ago."

The find also adds to the meager list of the species' remains found in Denisova cave, which include a piece of a pinky bone, a recently identified skull fragment and a few teeth. And last year, scientists ran a genetic analysis that showed one long bone shard from the cave belonged to a first-generation hybrid of a Neanderthal and a Denisovan.

Though the bones we do have are not nearly enough to reconstruct an actual Denisovan skeleton, the mandible does help fill in important physiological details.

"It tells us something about the anatomy and morphology of the Denisovans that so far remained completely elusive," said Hublin. "Aside from the fact that they had big teeth, we had no idea what they looked like."

That knowledge might soon pay further dividends: A better understanding of the Denisovan skeleton could help anthropologists discover new members of the species among bones that we've already found.

"In China there are a number of specimens that are not Homo erectus, that are not modern humans, and that are good candidates for being Chinese Denisovans," Hublin said. "But this has been impossible to prove today because in these fossils there is no ancient DNA preserved."

But if we could identify previously unearthed bones as Denisovans, it would help match up physical evidence with genetic studies that imply the species ranged far and wide across Asia. Modern humans from the region, and even as far as Australia, carry genes inherited from Denisovans.

More confirmed remains would also help scientists untangle the increasing complexity of the Denisovan family tree. A recent study using genomes from modern-day Indonesians suggested that the Denisovans were actually composed of three distinct groups, one of which was likely its own species.

More bones would help anthropologists better understand the diversity within the group of ancient people we currently call the Denisovans. The researchers hope to head back to the cave soon to conduct more excavations. They've already unearthed stone tools and animal bones with cut marks indicating they were butchered. No dates for these objects are available yet, though, so it's impossible to say whether they might have come from the same group of people as the mandible. And because the mandible was removed from the cave, it lacks the archaeological context that would help slot the bone into the history of the site.

Also missing from this find are the DNA sequences that would help illustrate where the Denisovans of the Tibetan Plateau stood in relation to the rest of their kin. They may have been close cousins to the Siberian Denisovans, or perhaps a group that diverged long before thanks to the forces of time and geography. Genetic evidence would also indicate whether the genes that let them live at high altitude were a recent mutation, or something they'd carried with them for many generations.

We might even find out if these Denisovans were still living in the region when our own ancestors climbed the steppes at the roof of the world. As is frustratingly, and enticingly, common in the realm of anthropology, new finds lead only to more questions.