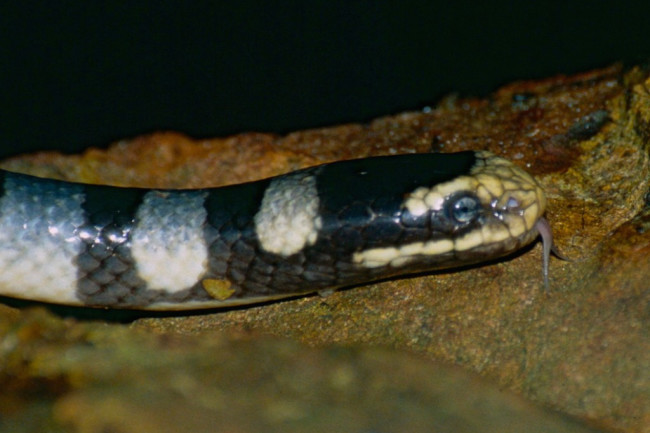 It's a shame snakes can't appreciate irony. If they could, sea snakes in Australia might find some humor in their situation. Despite living in water, they seem to spend much of their time desperately dehydrated. The true sea snakes, or Hydrophiini, include more than 60 species of almost frighteningly well-adapted reptiles. They swim with a graceful, ribbon-like motion through coastal waters around the Indian and Pacific Oceans. They have a venomous bite. Like many other snakes, they give birth to live young. (If you're curious about what this looks like, there's a video of a garter snake mom extruding some babies at the end of this post.) The ancestors of these snakes, though, lived on land. Scientists aren't sure how these formerly terrestrial animals evolved to live full-time in water that's too salty to drink safely. It had been suggested that salt glands under the snakes' tongues help them to process seawater. But more recent research showed that sea snakes can be dehydrated in the wild—they're not getting enough to drink after all. To find out more, University of Florida biologist Harvey Lillywhite and his coauthors got in a motorboat. They went to salty waters at the ends of two rivers on the western coast of Australia. There, they used handheld nets to scoop up about six dozen sea snakes belonging to five different species. Back in the lab, the researchers patted the snakes dry and weighed them. Then they put them in tanks of fresh water and watched to see what they did. Out of all the snakes, only four individuals drank immediately. (The researchers could tell when snakes were drinking because they usually came to the surface of the water and took gulps, flicking their tongues out before each swallow. They also weighed snakes afterward to check whether they'd drunk.) The rest of the snakes passed on the offer and didn't drink at all. Next, the researchers let the snakes get good and parched in the lab. They kept the snakes in the air, where the reptiles would gradually lose water through their skin and their breath. The researchers kept weighing the snakes. Periodically, they put them in either fresh water or salt water to see if they'd drink. Over the course of the next few weeks, the snakes dramatically shrank from dehydration. Essentially, they were shriveling up. Yet none of them took a single sip of salt water. When the snakes had lost about 25 or 30% of their initial body mass, some of them finally began to drink from the fresh water tank. Two species of snake, though, stayed on water strike. Some individuals had lost nearly 40% of their mass by the time the researchers ended the experiment. (Lillywhite notes that although the snakes were shrinking in mass, their bodies still looked "quite good." They did not start to resemble snake-shaped raisins—which "amazed us," he adds.) Meanwhile, other snakes were kept full-time in tanks of fresh or salt water. In fresh water, they either stayed stable or lost a tiny percentage of their body mass. Swimming in salt water, though, the snakes lost about 1 to 3% of their body mass per day. Their usual lifestyle is apparently quite dehydrating. Yet even when the snakes that had been air-dried in the lab did start drinking water, they didn't make up their lost body mass. They usually only ingested enough water to account for a small fraction of what they'd lost. Lillywhite thinks this means the snakes are used to being dehydrated. Living in western Australia, they experience long periods of drought. The sites where he collected these snakes had just gone five straight months without rain. In the wild, Lillywhite thinks sea snakes may wait for rainstorms, then slurp from "lenses" of rainwater that form on the surface of the salty river or ocean. They may have evolved to not really crave water during their months without a drink. The snakes' indifference to drinkable water in the lab suggests that they don't feel thirsty, even when their bodies are withering away. Since the snakes in the lab never drank enough to regain their lost mass, the researchers still don't know how they survive in the wild. When the dry season ends, how do they act? Do they ever gulp enough water to plump themselves back up? Do they have to wait until they coincidentally surface during a storm, or can they sense the rain coming and swim up to meet it? Lillywhite says he does't even want to speculate about the answers until he has more information. Sea snakes are still a riddle—humorless or not. https://youtu.be/F_YuaplPYH8?t=4m10s

Image: by Bernard DUPONT (via Flickr). Video: by DVFDrinkOrDie.

NOTE: This post has been altered slightly from an earlier version to incorporate clarifications from Dr. Lillywhite.