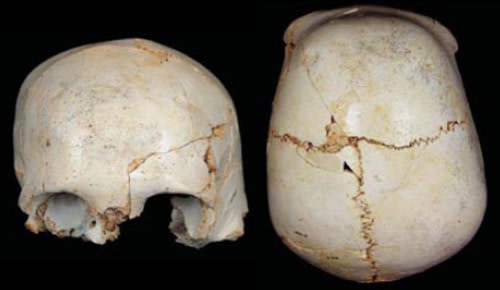 For all appearances, this looks like the skull of any human child. But there are two very special things about it. The first is that its owner was clearly deformed; its asymmetrical skull is a sign of a medical condition called craniosynostosis that's associated with mental retardation. The second is that the skull is about half a million years old. It belonged to a child who lived in the Middle Pleistocene period.

The skull was uncovered in Atapuerca, Spain by Ana Gracia, who has named it Cranium 14. It's a small specimen but it contains enough evidence to suggest that the deformity was present from birth and that the child was about 5-8 years old. The remains of 28 other humans have been recovered from the same site and none of them had any signs of deformity.

These facts strongly suggest that prehistoric humans cared for children with physical and mental deformities that would almost have certainly prevented them from caring for themselves. Without such assistance, it's unlikely that the child would have survived that long.

Before moving on, a point of clarification: when I say "human" in this piece, I mean the genus Homo, which the child certainly belonged to, rather than the species Homo sapiens, which it certainly did not (its skull is too old). 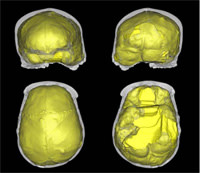 Garcia found Cranium 14 in many different pieces over two years, but the fragments were preserved so well that she could reconstruct the skull very accurately. On doing so, she found it clearly belonged to an immature child. Its brain volume was within the adult range, but certain connections between the different bones of its skulls hadn't fully matured. Based on that, Garcia guesses that the child was about 5-8 years old when he or she died.

Garcia also found that two of the bones in the child's skull - the left parietal and occipital - had fused far too prematurely. When humans are born, our skulls consist of 45 different bony elements. These plates are separated by connective tissue and they can move and flex against each other. That's necessary to allow for the growing brain room to expand. As a child matures, the bones of its skull start to fuse together and lose mobility. Eventually, many become joined by rigid sutures.

In Cranium 14, one of these sutures - the lambdoid suture - had closed too soon on the left side but not on the right. This premature fusion restricted the growth of its skull and as a result, it had become twisted and asymmetrical - a condition known as craniosynostosis. It's estimated to affect 1 in 2,000 babies, although It's a rare disorder, with cases involving the lamdoid suture, as in Cranium 14, are the rarest type, affecting just 1 in 40,000.

It's not clear why the child's skull developed abnormally. Even for modern humans, the causes of craniosynostosis are difficult to work out, but Gracia has some ideas. The dimensions of the other bones and sutures suggest the lamdoid suture fused while the child was still in the womb, during the third trimester. The timing suggests a couple of possible causes - some sort of physical trauma experienced in the womb, or a metabolic disease like rickets or anaemia. Of these options, Gracia thinks that trauma is the more likely, for rickets and anaemia tend to develop after birth.

Whatever the cause, the early closure of the lamdoid would have put a lot of pressure on the growing brain. The skull reveals that this was a remarkably severe case of craniosynostosis, and Garcia suggests that the child would have experienced motor problems, developmental delays and, possibly, mental retardation.

In some cases, this condition has been linked to mental retardation and can lead to motor problems and developmental delays in modern-day children.

With such disabilities, the child would have been unable to reach the age of 5-8 without the care of its peers.

Gracia says, "It is obvious that [this] hominin species did not act against abnormal/ill individuals during infancy." There are a couple of other specimens that support this idea. One skull recovered from Georgia was 1.77 million years old and the owner had clearly lost all but one of its teeth several years before it died. According to the authors, the individual may have depended on others to make up for their inability to chew. Another skull unearthed in China showed signs of a substantial head wound that had subsequently healed.

That may not be surprising news for some of us, but remember that humans have not always behaved in such an altruistic way throughout our history. As just one example, the bones of several children with craniosynostosis were uncovered in the cemetery of the Medieval Hospital of St James and St Mary Magdalene in Chichester, England, a 15^th century almshouse where deformed children were clearly abandoned.